​There are structural hurdles to unlocking growth in landlocked developing countries (LLDCs), a high-level meeting on investment in LLDCs heard on the final day of UNCTAD's World Investment Forum at the Palais des Nations, Geneva, on 16 October.

LLDC ministers called for stronger efforts to develop productive capacity and drive diversification through foreign direct investment (FDI), to set these countries on a growth path.

In contrast with the recovery in global FDI in 2013, FDI inflows to LLDCs declined for the second year running. The flows to these countries fell by 11 percent in 2013, compared with the 9 percent rise in world flows. While the $30 billion in FDI flows to LLDCs in 2013 represented only 2 percent of global flows, with three-quarters of these investments going to six mineral-exporting LLDCs, FDI remains relatively more important for this group of economies than for developing countries as a whole. The potential role of FDI is therefore significant.

"Given the importance of FDI to this group of economies, more efforts should be made to increase and diversify foreign investments, and to maximize their impact on sustainable development outcomes," UNCTAD Secretary-General Mukhisa Kituyi said.

Because economies of landlocked countries face persistent challenges linked to the negative impact that their geographical location has on trade opportunities, the Almaty Programme of Action has focused on actions needed for the further development of trade-related infrastructure and improvements in customs and in trade facilitation.

Gyan Chandra Acharya, United Nations Undersecretary-General and High Representative for least developed countries, LLDCs and small island developing states, said that collaboration between LLDCs and transit countries, and the development of productive capacities and economic diversification, was important in boosting the economies of LLDCs.

Ministers at the meeting echoed this, with Lao’s Vice Minister of Planning and Economy, Bounthavy Sisouphanthong, noting that “growth in the non-resource industrial and services sectors is an important basis for diversification of the Lao economy over the long-term.” 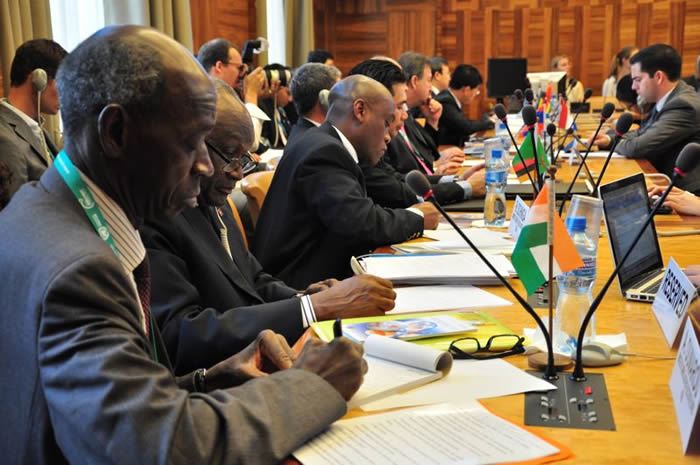 Enhanced regional cooperation was also mentioned as an important way to realize development through cross-border infrastructure projects and regional clusters of firms. This will require measures to reduce barriers and facilitate cross-border investments, mechanisms for joint investment promotion and a series of policy measures to accommodate regional business development projects, including policies to harmonize or mutually recognize regulatory standards.

Rigoberto Gauto Vielman, Minister for Economic Relations and Integration of Paraguay, underlined the importance of regional integration. He also said that countries should support their domestic enterprises because a vibrant local business community gives a strong signal to foreign companies.

Louise Kantrow, Permanent Representative of the International Chamber of Commerce to the United Nations, added that more government and multilateral action should be taken to increase the size of the formal economy.

Ahmed Abtew Asfaw, Ethiopia's Minister of Industry, said: "Geography matters in FDI and trade, but it's equally important not to overstate this factor. New technologies are changing the impact of traditional barriers."

The important role of technology was also underlined by Anat Bar-Gera, Chairman of YooMee Africa, an international telecommunications and Internet company. She said that the introduction of broadband in LLDCs can bring innovation, advance learning and spur enterprise development.

Private sector representatives agreed that investment would play a key role in developing these productive capacities, which can help to advance targets in the proposed sustainable development goals.

A report on the meeting will be made available to the participants of the Second UN Conference on Landlocked Developing Countries, which starts in Vienna on 3 November 2014.

UNCTAD also launched the third edition of its Investment Guide to the Silk Road at the meeting. The publication outlines the investment climate and opportunities in Kazakhstan, Kyrgyzstan, Tajikistan, Turkmenistan and Uzbekistan, as well as four western provinces of China.

Temir Sariev, the Minister of Economy of Kyrgyzstan, welcomed UNCTAD’s publication, saying that the guide will contribute to the rebirth of the Silk Road.

Wang Shouwen, China’s Assistant Minister of Commerce, congratulated UNCTAD on the publication and said that previous editions of the guide had been very helpful to the Chinese government and private sector.