Rising inequality a blight on our development hopes

The development gains of the 20th century are being eroded by growing inequality - and something needs to be done about it.

Inequality is deepening. Instead of reducing, it’s getting worse.

The challenge is exacerbated by a fraught multilateral system and rising tensions, attendees at the annual meeting of UNCTAD’s governing body heard, at the United Nations headquarters in Geneva.

The gap between the haves and the have-nots is a now a deep chasm.

Today, the world’s 26 wealthiest people own the equivalent of the 3.8 billion people who make up the poorest half of humanity, according to Oxfam International.

Since the financial crisis in 2008, the number of billionaires has almost doubled.

Meanwhile almost half of humanity barely escapes extreme poverty, living on less than $5.50 a day. 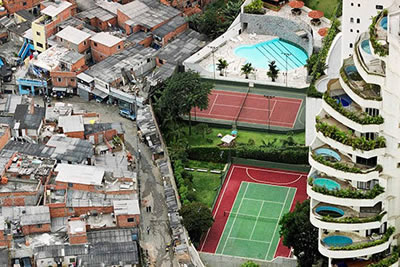 The situation is untenable and is a fundamental risk to achieving the sustainable development goals (SDG).

This is why ministers and representatives from across the world chose to tackle inequality at the 66th meeting of UNCTAD’s Trade and Development Board (TDB).

“Along with economic, social and environmental dimensions, the unequal division of our world into pockets of poverty and of plenty remains a major barrier.”

He emphasized that inequality was a drag on poverty reduction and the SDGs. SDG10 is focused on reducing inequalities.

It’s how you look at inequality

The inequality situation is complex and multidimensional.

But, on another level, if GDP per capita is used, the trends are very different.

Based on UNCTAD calculations, inequality between countries actually increased from the early 1980s until 2002, a period characterized by the debt crisis, structural reforms and economic instability in most of the developing world.

The fast growth of the global economy from 2003 reversed that trend, and so inequality started to slowly decrease.

However, from 2015 inequality between countries started to increase again.

The “elephant curve”, which depicts global inequality and growth, shows that from 1980 to 2016, the top 1% captured 27% of total growth of the world economy, while the bottom 50% captured only 12% of total growth.

J. Nehru University's Jayati Ghosh says the rise of inequality is being driven by the production of new assets like intellectual property and data, the privatization of social assets such as natural resources, and skewed public spending programmes that don’t prioritize the social and economic needs of citizens.

“The poor, in most of the world, are barely better off than they were 20 years ago, and more and more trade is in the form of intangibles,” Ms. Ghosh said.

“We need to consider a new system of understanding patterns of trade,” she said.

“Part tax avoidance, part monopoly profit, what we are treating as merchandise trade is no longer really just that… and it affects the ability of governments to generate revenues from that trade.”

“International cooperation is required to recuperate this tax base, to tax it effectively, in order to reduce inequality,” he said.

“But it must be done in a way that avoids the decline in real investment and shares the fiscal resources equitably among nations.”

Trade has played a dual role in both lifting countries and the world out of poverty, but it also has a dark side, the meeting heard.

“Globalization including through trade has brought strong gains in terms of income growth. But it has also led to marginalization.”

In the context of inequality reduction, the overarching goal should be to make trade policy more inclusive.

“The rising inequality within countries is not inevitable. Good policies can make a difference,” she said.

Ms. Coke-Hamilton emphasized that what we need is not less trade, but fairer trade.

“What the world needs is more trade and trade that raises the incomes of all countries and income groups within countries.”

Dr. Kituyi said there are several reasons why the international community is further behind today than four years ago in making trade, finance, investment and technology work for development.

“Today is a dark hour for multilateralism and international cooperation,” he said.

“But I am confident in our ability to creatively weather this difficult time for multilateral cooperation, and to find new solutions.”

UNCTAD is analyzing the challenge of inequality from four different angles related to its core mandate during its week-long meeting which runs from 24 to 28 June.

These include looking at the linkages between trade and inequality and ways to reduce inequality, the widening digital divide, and the growing inequalities among developing countries, using policy levers.