Rural communities and Government officials from selected Asian countries exchanged views and shared experiences on best practices in using Geographical Indications (GIs). Least developed countries (LDCs) often have traditional products and knowledge that are specific to their territories and rural communities. Thanks to GIs, a product that has been traditionally produced by a rural community can be recognized for its geographical origin indicating that it possesses specific qualities, reputation or characteristics. Products become known to be unique given the natural or human factors of a geographical region.

The regional workshop in Cambodia aimed at advancing the interest in GIs of many LDCs and rural communities and in sharing experiences and ideas on how to implement them effectively. Given their biodiversity and pristine environment, Mr. Stefano Inama, UNCTAD, pointed out that LDCs are very well endowed in traditional products and local know-how.

Mr. Stephane Passeri, FAO, shared this view stating that "LDCs are usually referred to as being poor, however in terms of geographical indications, these countries are extremely rich".

The workshop discussed the lessons learnt from a preceding event Voices from rural communities in Least Developed Countries: Promoting traditional food products and the territory through "made in" initiatives and geographical indications, held in Turin, Italy, in October 2014.

Representatives and producers from Bhutan, Cambodia, Indonesia, Lao PDR, Madagascar, Mozambique, Myanmar and Thailand, as well as experts from UNCTAD and FAO shared experiences on conditions and prerequisites to successfully adopt GIs. In addition, Mr. Fabrice Mattei, Attorney at de Rouse & Co Law Firm, presented the law and practices of enforcement of GIs in Asian countries.

The workshop helped participants improve their understanding of constraints and difficulties that institutions and rural communities face in identifying products, drafting specifications for GIs and processing GIs registration. They in turn can use this knowledge to identify mechanisms and modalities to assist the rural communities in Asia to promote their traditional products in the international market while preserving their identity and biodiversity.

The workshop also served to strengthen south-south collaboration. The way forward for each country depends on its current stage in the GIs implementation process. In Cambodia, following the Kampot Pepper success story, the main challenge is now to move forward with new products.

The Crab from Kep has been identified as being as additional candidate for GI registration in the near future. Elsewhere, UNCTAD's follow-up activities are planned in Myanmar with the assistance of FAO, as well as in Bhutan and in Laos where the needs for assistance were put forward by national representatives during the workshop. 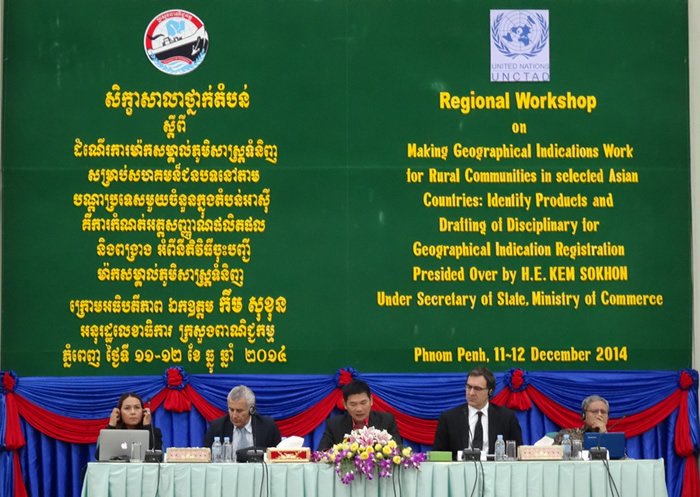