Short-terms effects of the coronavirus outbreak: what does the shipping data say?

It is too early to gauge the full economic and trade effects of the Coronavirus outbreak. However, shipping data, based on real-time observations of vessel positions (AIS) and information about the cargoes aboard those ships, already shows a change in the operational behaviour of container vessels and in the amount of oil products on the water. This article seeks to put these short-term changes in the context of the potential impact of the coronavirus epidemic on China’s manufacturing and trade of oil products.

Container ship visits to Chinese ports, measured both in number of vessels scheduled to call and their cumulative capacity in Twenty-foot-Equivalent Units (TEU) plunged in late January and early February (see Figure 1). At the same time, the ratio of missed port calls (i.e. scheduled vessel calls that do not occur) has risen sharply to levels usually seen in late February and March (see Figure 2). 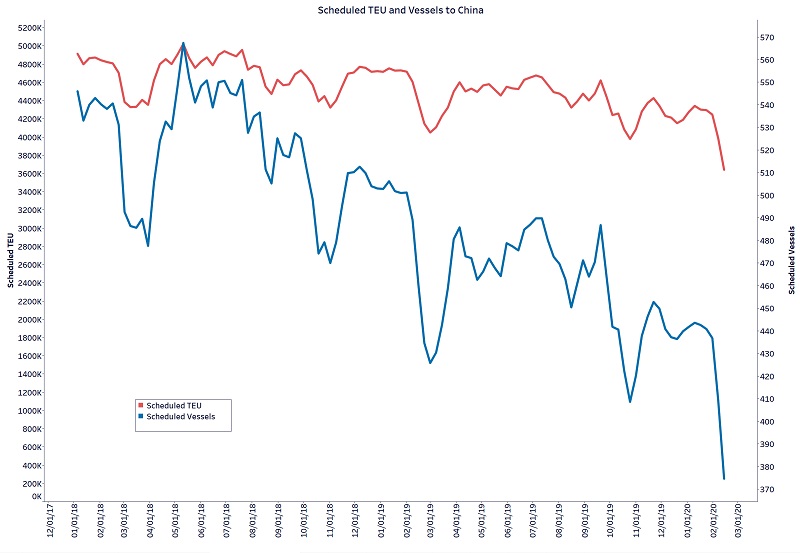 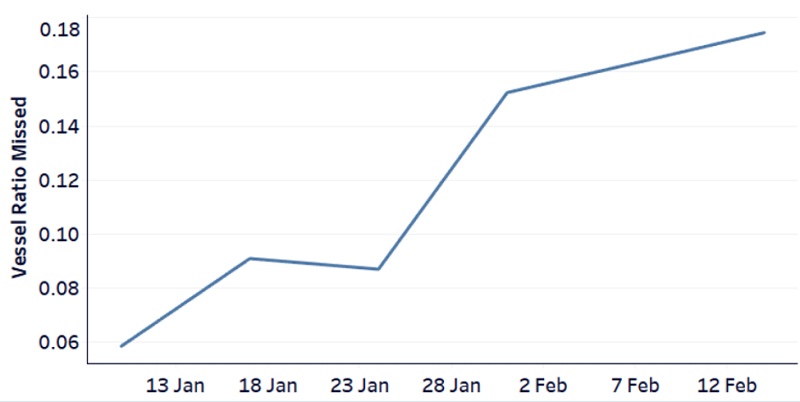 Typically, vessel operating companies reduce capacity in the weeks following the two-week Lunar New Year vacation in China. The number of missed port calls – shipping companies bypass a port because of a lack of volume and go straight to the next port in their scheduled rotation – rise during that period. Ahead of the holiday, shippers usually pre-order goods ahead of the drop in Chinese output, which helps minimize the number of missed port calls.

This year, the traffic slowdown, with both fewer scheduled calls and more cancelled ones, is occurring much earlier. This comes even though many airlines have announced cancelling flight service, reducing air cargo capacity and forcing manufacturers to switch to waterborne transportation even for higher-value and more time-sensitive cargo.

More significantly, the slowdown in port calls is occurring worldwide, not just in China. Shipping companies have been reducing scheduled capacity since about August of 2018 on most trade lanes as trade wars slow global demand for cargo capacity. In the second half of January and early February, this drop accelerated significantly. The centrality of China to the movement of goods around the world explains this: if Chinese ports are not loading or discharging containers, there is no reason to stop at the port where the shipment is supposed to go to or come from. The move towards bigger container ships is another important factor at play: a missed port call now has a more profound impact on available capacity.

Increased amount of oil products on the water

China also plays a crucial role in terms of global oil products trade, as an important source of demand for crude oil, and of supply of refined products. Crude oil is moved under long-term arrangements, via either annual contracts or bought months in advance. As expected, the flow of this commodity currently seems unaffected. However, signs of stress are starting to appear in the downstream sector of the oil value chain.

One way to quickly identify changes in world demand for energy products is to measure the amount of a commodity that is in transit aboard ships. Reduced demand will lead producers to ship fewer cargoes, reducing the amount of oil on the water, and vice versa. Using this metric, jet fuel emerges as the first oil product (transportation fuel) showing signs of a slowdown following the coronavirus outbreak.

Since the beginning of the year, jet fuel in transit has declined by 2% from the same period in 2019. Measured since 10 January 2020, when the extent of the epidemic started to become more widely known, the drop has been 5% (see Figure 3). This drop must be seen against the backdrop of steady rises in jet fuel demand over the last five years, representing the fastest growing segment of the petroleum product market, underpinned by air travel demand.

Another indicator is the amount of a commodity onboard ships that are idle. This so-called “floating storage” can build up due to operational factors such as port congestion or weather delays, or it occurs because demand dropped while the ship was sailing from the loading to the discharge port. Using this indicator, we observe that although the volume of diesel in transit is steady during the same period, the amount of the fuel in floating storage – aboard ships that are idle and not moving – has soared (Figure 4). The importance of diesel transport development stems from the fact that it is a rough indicator of industrial activity because it is used, among other things, to heat factory furnaces and power trucks and small ships.

This points to a reduced demand for diesel, notwithstanding the introduction of a sulphur emission cap by the International Maritime Organization (IMO) at the beginning of 2020. The IMO sulphur cap was expected to push prices up, straining existing supplies. However, several weeks after the new regulatory regime entered into force, this has not happened. Demand weakness from traditional land-based diesel market, the coronavirus outbreak (which has further reduced demand, particularly in China) and the fact that refiners are putting more product on the water explains this.

Potential impact on China’s manufacturing and trade of oil products

Data on the amount of crude oil imports and crude oil in storage onshore in China reveal a significant slowdown in refining activity, especially in the north of the country where the independent refiners are concentrated. At the same, net outflow of transport fuels – jet fuel, gasoil and gasoline – has increased. The longer-term trend has been a steady expansion of Chinese exports of petroleum products as demand growth in the country abates, and refining capacity expands.

Refinery runs, particularly in the north of China, are being cut, leading to a pile-up of crude oil vessels waiting offshore to discharge and an increase in onshore storage. Refinery runs are calculated based on the change of onshore storage levels (remotely measured by satellite-mounted radar sensors, and the sum of supply made up of observed waterborne deliveries and statistical modelling of domestic production and deliveries by pipeline).

Independent refiners are concentrated in the north of the country. In the centre and south of China, state-owned enterprises dominate the oil refining industry and have more flexibility in disposing of petroleum products through exports. Independent refiners only have limited export quotas. Diesel exports are substantially higher than a year ago, while the volume moving between ports in China has dropped.

For light distillates, which include gasoline for cars and naphtha, a starting material for making plastics, the volume exported is roughly in line with last year, while internal deliveries are higher – the result of a significant amount of domestic refining capacity coming online in 2019. However, domestic flows measured by tracking vessels that load and then discharge at Chinese ports, are only about three quarters of the volume seen in November and December 2019. In the last three quarters of last year, month-over-month growth in domestic shipments was climbing at an average 6% before the slowdown in 2020.

When the crisis passes, and Chinese domestic demand recovers, refiners will be saddled with crude oil that is sitting in tanks onshore and has not been processed. This will lead to higher refinery runs and higher exports, accelerating China’s move to becoming a bigger net exporter of petroleum products and roiling the supply-demand balances in global markets.

The outbreak and spread of the coronavirus, across China and now the world is influencing decisions by manufacturers, importers and exporters. Immediate actions so far show an un-coordinated and pointillist approach.

The outlook for economic and trade activity and refined oil product demand — particularly in East Asia — is one of weakness. The epidemic has yet to run its course, but even after the spread subsides and China starts to return to normal business activity, it will take a long time to unwind the stresses inflicted on the world’s trading system. A return to medium and long-term trends in shipping and trade is unlikely before the second half or even fourth quarter of 2020.