Developing economies ran a combined merchandise and services trade surplus for 2013 of $177.6 billion, the UNCTAD Handbook of Statistics 2014 reveals, representing a fall of 40 per cent as measured in current prices compared with 2012 and 63 per cent compared with the peak in 2007. Transition economies also ran a trade surplus in 2013 of $128.6 billion. This represented a fall compared with the previous year (21 per cent) and with the peak in 2011 (33 per cent). Developed economies ran a trade deficit of $65.3 billion in 2013, down from almost $400 billion the previous year; a reduction of 84 per cent (current prices). 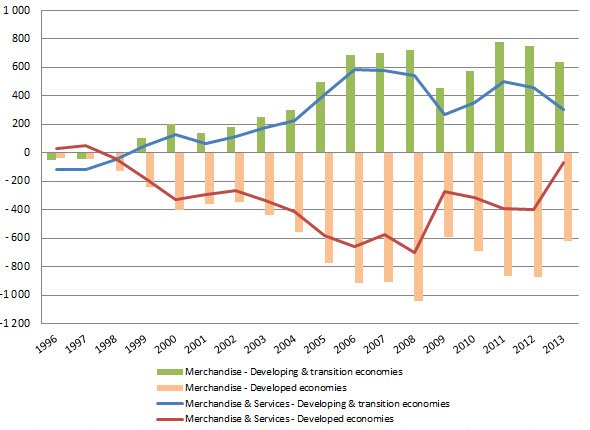 Trade balances varied significantly at the regional level. The overall trade surplus for developing countries was driven by Asia, which operated a surplus of $403.8 billion in 2013. In contrast, developing countries in Africa and the Americas ran aggregate trade deficits of $100.4 billion and $114.8 billion, respectively. Developed countries in Europe ran an overall trade surplus of $630 billion, whereas developed countries in the Americas and Asia ran deficits of $566.4 billion and $130.1 billion, respectively. 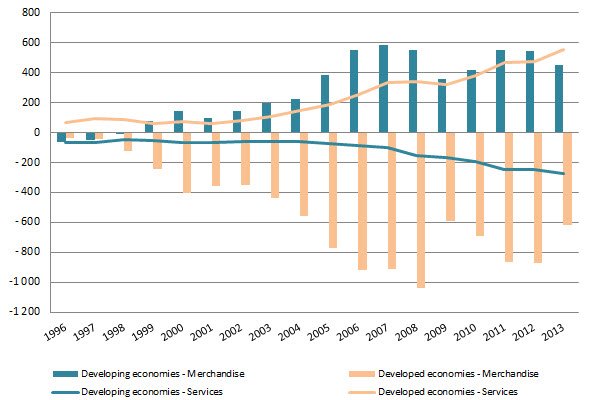 Along with providing detailed statistics on international merchandise and services trade, the 2014 edition also provides investment, commodity prices, maritime transport and other economic and social data, for all individual economies for which data are available. In addition, it includes figures for geographical regions, various economic groupings and world totals. The Handbook aims each year to provide data for the analysis and evaluation of world trade, investment, international financial flows and development. To the extent possible, UNCTAD provides estimates to fill in data gaps in order to furnish the most complete data sets.

The Handbook is available in printed form and on DVD. In addition, the data underlying the findings of the Handbook are available online at UNCTADStat, a continuously updated statistical database.