As firms and governments reorganise production in the face of new technological possibilities and geographic realities, international trade and the blocs that governed it are set for major shifts from here to 2049. Isabelle Durant, number two of the UN Conference on Trade and Development, sets out a positive yet honest vision for a reappraisal of the current order, seizing opportunities whilst curbing excesses.

Trade is the oldest human activity. Since antiquity, it has shaped successive civilisations, stimulated innovation, and underpinned modes of production. It has determined the paths and places of development, as much a cause of wars and famines as it is responsible for rapid increases in prosperity and wellbeing. For these reasons as for many others, trade, and thus international trade, will still be around in 2049. 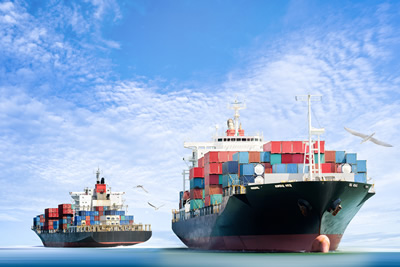 The question is how international trade, today the product of hyper-globalisation and ultra-liberalism, will evolve and affect the world of tomorrow. A world in which technological and economic interconnection, as well as climate change, will be game changers.

“When elephants fight, the grass gets trampled”

Trade wars, like the one between the USA, China, and the European Union at the start of 2019, are certainly nothing new. However, while the multilateral order absorbed many shocks in the past, the ‘Make America Great Again’ stance of the United States under President Donald Trump is transforming relations between the major trade powers. China, for its part, attempts to show through its actions that a different model of trade is possible, although it tries to do so without ridding itself of protectionist habits or of its somewhat equivocal status as a developing country at the heart of the World Trade Organization (WTO). At the same time, the EU’s attempts, through its common trade policy, to strike the right balance in terms of reciprocity with external partners continue to generate debate, with positions ranging from protectionism to complete laissez-faire.

This trade war, emblematic of a new paradigm in international relations, is about technology too. In the battle for digital supremacy, American giants fight Chinese titans. It is GAFA versus BATX.1 As the quote goes: “data is the new oil”. Faced with fierce competition for technological leadership, the European Union is looking to conquer the regulatory landscape, that of governance and the protection of citizens’ rights. Faced with tough odds in the trade war, hope must lie in emulation of the EU’s General Data Protection Regulation opening the door to international protocols.

This trade war, emblematic of a new paradigm in international relations, is about technology too. In the battle for digital supremacy, American giants fight Chinese titans. It is GAFA versus BATX. As the quote goes: “data is the new oil”. Faced with fierce competition for technological leadership, the European Union is looking to conquer the regulatory landscape, that of governance and the protection of citizens’ rights. Faced with tough odds in the trade war, hope must lie in emulation of the EU’s General Data Protection Regulation opening the door to international protocols.

And why not with the EU’s African partners sooner rather than later? It is not unrealistic to imagine a fair and effective Africa-EU trade partnership over the coming decade, one that avoids fruitless digital confrontation. With a shared environment favourable to investments and yet based on fair trade and protection of data and citizens, the African continent and the EU could well build a truly regulated digital and trade area by 2049. The trampled grass could then seriously irritate the elephants’ feet, and bring them to the negotiating table with a more amenable attitude.

International trade, regulated in economic and technological terms, must also drastically reduce its carbon footprint. Booming trade currently drives an increase in CO2 emissions. By 2049, emissions from the transportation of goods, all modes included, are projected to triple. Putting air travel aside, international freight – with maritime shipping generating more than half of its pollution – is set to overtake passenger transport as a source of emissions. Given their impact on the climate, how can we rethink the channels and forms of international trade?

There is an urgent need to identify what impact a global temperature rise of 2 degrees Celsius would have on international trade. What new maritime routes will open up, and what new ports? Which populations will be threatened? Which types of agriculture will be transformed or reconceived? Which jobs? What will the trade map look like in the world of 2049 when temperatures have risen by 2 degrees Celsius? If the fight against climate change is a priority, it is irresponsible not to envisage all options in order to better anticipate and regulate.

The other important task on the international community’s to-do list is exploring how to limit, or better to nullify, the impact of international trade on the climate. For too long it has been taboo to reflect on the interaction between trade and the environment, whereas this reflection must guide the design of future policies. The refashioning of the trade system for the future should also strengthen and empower regional and local trade. Reflection on the consumerism of our own societies has a place here too, one that points to emerging solutions that let people borrow rather than buy and use rather than own.

Is the solution to be found in local production and short supply chains? That would be putting it a little too simply. The internationalisation of trade has always opened up new opportunities. Between China’s catch-up and the struggles of those developing countries excluded – whether voluntarily or by force – from international markets, it would seem that prosperity and sustainable development cannot be achieved outside the international system, providing that certain conditions are in place. For example, new rules to cut protectionism in sectors like agriculture, textiles, and medicines must be proposed and enforced. In 2019, this issue lies at the heart of the next reform of the WTO, which has proved incapable of bridging divisions among its members in recent years. A fairer and more inclusive international trade system cannot do without a truly multilateral alternative to the present options of either selective plurilateralism or normalised trade war. Among other aspects, the new rules must bring with them a new form of dispute resolution through a permanent multilateral court that would handle trade conflicts between companies and states.

A time beyond just-in-time

Technological innovation and climate disruption move quicker than negotiators. Building 2049 will require more than ignoring reality or just denouncing certain actors. Building 2049 means applying the full spectrum of innovation in the interest of regulated trade that does not harm the climate.

"The time when we were trading everything, all the time, and at whatever cost, may be behind us"

To achieve this, unknowns of both today and tomorrow must be explored. Will the spread of 3D printing transform manufacturing as the mobile phone and the internet have revolutionised online shopping? Will international trade in services, a euphemism for increased outsourcing, take over permanently from international trade in goods? Will a more regional approach to trade in goods, one that is more traceable, more accessible to smaller players, better controlled, and more redistributive, take precedence over the globe-spanning value chains along which the lion’s share of profits flow up to the head of the chain?

Despite these open questions – or precisely because of them – tomorrow’s exchange and trade need to be cannier, gearing trade policy towards a product’s true added value. The time when we were trading everything, all the time, and at whatever cost, may be behind us. Too often the price was a race to the bottom for the sustainability of the planet and our societies. The picture of global trade would be very different today if the rules of the game allowed actors of all sizes to be included, and allowed regional circuits to flourish without falling into protectionism. A rebalancing of international and regional trade is one of the key questions for decades to come. Even a snapshot tells us that much.