UNCTAD ratchets up support for an empowered and energized Angola

The EU-UNCTAD joint Programme for Angola&#58; Train for Trade II picks up steam following the project’s 11 April launch in Luanda.

UNCTAD Secretary-General Mukisha Kituyi officially launched on 11 April the four-year, €5.5 million ($6.9m) project aimed at helping Angola reduce its dependence on oil and reignite growth, which stalled after the price of petrol crashed in 2014.

The UN trade body’s top official was joined by Angola’s minister of commerce, Joffre Van-Dúnem Júnior, and the head of the European Union Delegation to Angola, Tomás Ulicný.

The ceremony was followed by two days of technical meetings, during which the project team mapped out the way forward with government representatives, heads of private companies, key academic experts and members of civil society.

The UNCTAD representatives also met with ministers and other high-level government officials, including: 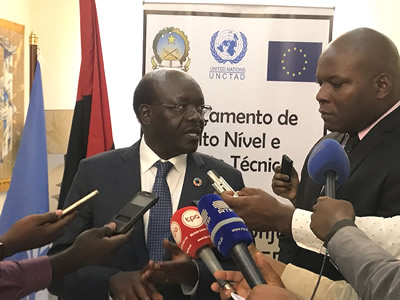 The meetings resulted in an agreed action plan for the next four years.

Dr. Kituyi said the mission was a chance “to share our visions of a prosperous, inclusive and diversified Angola”.

“At UNCTAD, we are excited and optimistic,” he said at the close of the technical mission, encouraging UNCTAD staff and Angolan stakeholders to build on the sense of optimism that had engulfed the project.

The overarching goal is to help Angola, one of the world’s 47 least developed countries, build a more resilient economy for the 28.8 million people that call the country home.

To do this, the project will focus on seven key areas:

For each area, UNCTAD will work closely with project stakeholders and beneficiaries to ensure local ownership. All course material will be developed in Portuguese as well as English.

To help Angola strengthen commercial diplomacy, courses are being developed on various dimensions of trade policy and negotiation strategies. Forthcoming capacity-building workshops will also focus on non-tariff measures. And UNCTAD will train Angolan trade leaders to use key databases and analytical tools ­– such as UNCTADStat and WITS – to improve policy formulation and trade negotiations.

The Angola Green Export Review will map and develop promising green export sectors by identifying the products and local or regional supply chains in which Angola has a comparative advantage. UNCTAD will train stakeholders in green product development and will help trade leaders design policy measures for green industries.

The “green” economy represents an opportunity to make growth more sustainable and to better distribute the benefits. It’s also an opportunity to avoid some of the negative effects that growth in many developed countries had on the environment.

Another key area of support will be to strengthen trade and logistics. Training courses will be developed on the comparative advantage of each mode of transport in Angola, helping producers and exporters to combine them to ensure door-to-door trade service.

The Angola Investment Policy Review (IPR) will help the country’s policymakers attract foreign direct investment (FDI) beyond the extractive industries. It will support the government in assessing Angola’s legal, regulatory and institutional framework for investment. A fact-finding mission is planned for May-June 2018.

Small business development will be strengthened through Empretec, UNCTAD’s entrepreneurship training programme. The component will focus on helping Angolan policymakers formulate a national entrepreneurship strategy and will train entrepreneurs and small business owners. Training workshops and courses will cover topics such as risk taking, innovativeness, networking, and investment attraction. Empretec activities will begin in the first half of 2018.

At the request of Angolan authorities, UNCTAD will develop targeted opportunities to strengthen the creative economies. Together with the EU and Angolan officials, UNCTAD will explore options to fortify the plastics, visual arts and handicraft sectors.