UNCTAD report discussed at the US National Ethanol Conference

The findings of UNCTAD's recent report: The State of the Biofuels Market: Regulatory, Trade and Development Perspectives, was presented at the National Ethanol Conference in Texas on 19 February.

The National Ethanol Conference - organized by the Renewable Fuels Association of the United States, is one of the largest renewable energy events connecting industry representatives with national and foreign players active in the ethanol market. It brings together over a thousand industry and government representatives.

The 2015 event sought to highlight the importance of global ethanol markets to the US ethanol industry, as exports markets become increasingly important for the US biofuels industry.

UNCTAD was invited by the US Renewable Fuels Association (RFA) to present the findings of its recent report: The State of the Biofuels Market: Regulatory, Trade and Development Perspectives.

The report highlights major transformations in biofuels production and trade between 2006 and 2014, and related challenges faced by producers and countries, especially developing countries, active in the biofuels markets.

UNCTAD took part in a panel on "Going Global : Building Ethanol Demand Internationally"   together with, among others, the European Ethanol Industry Association (ePURE) and the Foreign Agricultural Service of the US Department of Agriculture. 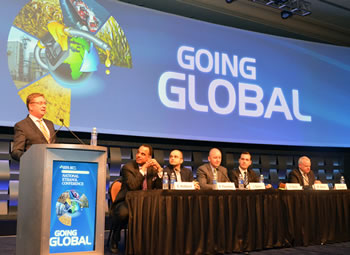 The panel discussed regulatory aspects which have strong influences on ethanol trade. In addition, companies engaged in ethanol exports (Eco-Energy, Lakeview Energy) participated in the panel, providing market intelligence insights on the likely perspectives for ethanol exports of different producing countries in the world. Current discussions in the biofuels industry on optimal regulatory setups to promote 2nd generation biofuels were also discussed, in view of imminent regulatory decisions in the area which are expected to be adopted in the European Union.

In the context of environmental and development processes embodied in ongoing global negotiations on sustainable development goals and the 21st Session of the Conference of the Parties to the United Nations Framework Convention on Climate Change (COP21) in Paris in December 2015, UNCTAD stressed the importance of international cooperation and business linkages between the United States, European and developing country producers, in order to reconcile biofuels expansion with food security and environmental sustainability objectives.

It also stressed that the crafting of regulatory arrangements in major markets should not exclude developing countries from this growing market.