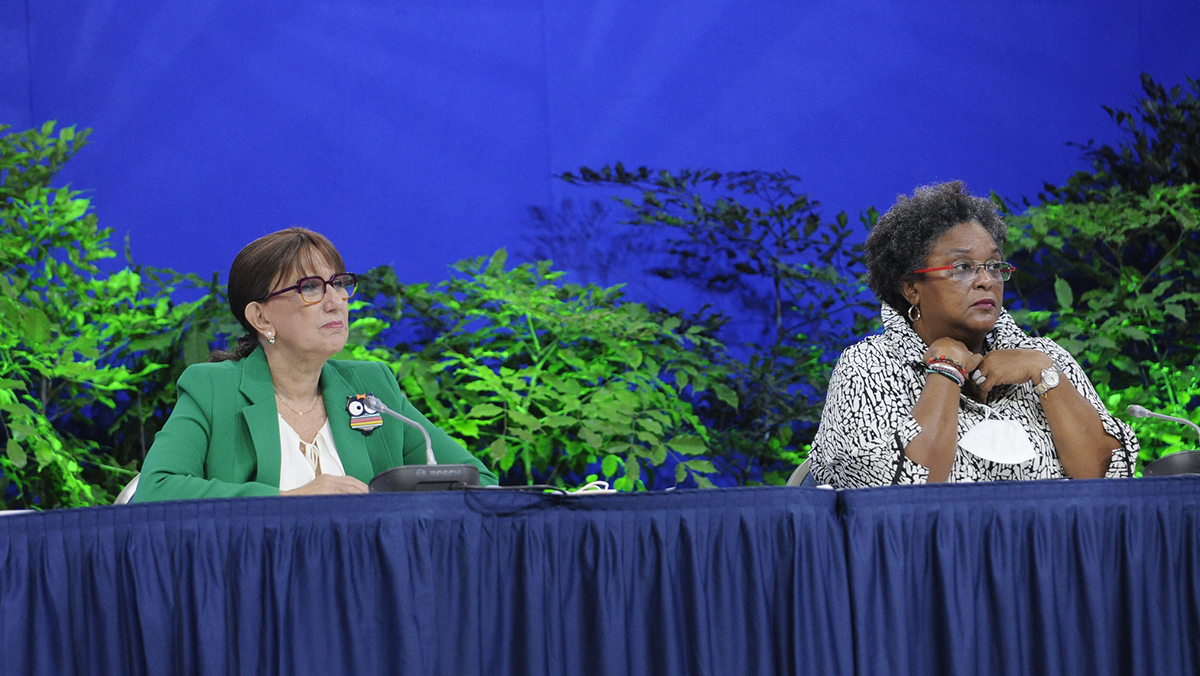 Even before the pandemic, debt levels were dangerously unsustainable, especially for developing countries and the world’s poorest nations. COVID-19 has accelerated this challenge exponentially.

Reform is the only way forward, world leaders and a Nobel laureate said at the first ministerial round-table discussion of UNCTAD’s 15th quadrennial conference (UNCTAD15).

Barbados Prime Minister Mia Amor Mottley gave her “report from the frontlines” as a nation at the intersection of debt and climate vulnerability.

“We are either going to find ourselves servicing debt or servicing people. We have to make the choice,” she said, adding her nation could not do both.

Ms. Mottley called on those attending UNCTAD15 to come together to “rescue the international system” and “create a new trade agenda that works for the whole world”, which includes a revisioning of the debt and trade systems.

The dark debt facts and figures

Setting the stage, Ms. Grynspan provided the unsettling figures around debt and the gap for financing development. She said a recent OECD report found that the annual SDG financing gap widened to $4.2 trillion in 2020, up from an earlier UNCTAD estimate of $2.5 trillion.

This is due to higher financing needs and falling tax revenues relative to GDP in developing countries, as well as the collapse of private external financing to the tune of $700 billion.

She urged that we need to find lasting solutions to boost public development finance and address unsustainable debt burdens in developing countries.

Poorer countries, she said, also suffered at times from a too rapid integration into international financial markets, including premature capital account liberalizations, which has led to the build-up of crippling external debt burdens.

“The current landscape of development finance clearly calls for urgent rethinking and reform,” she said. “While the G20 Common Framework is a first step forward, a more comprehensive approach to sovereign debt restructuring and relief will be needed.”

Reflecting on his own experiences of debt restructuring in Argentina, Mr. Guzmán said unsustainable debt burdens prevent countries from establishing a path for economic recovery and create destabilizing economic and social dynamics.

Restructuring debt can also be problematic. “Currently, most restructuring comes in the form of ‘too little, too late’,” he said, adding that restructuring does not always work due to deficiencies in the international financial architecture and a power imbalance between debtors and creditors.

He called for a better multilateralism based on sound principles, transparency, fair treatment of different debtors and creditors, and a larger role for UNCTAD in providing unbiased, fair debt sustainability analysis.

All speakers noted the critical importance of the $650 billion in special drawing rights made available by the International Monetary Fund.

Ms. Calviño said: “We need to make better use of special drawing rights to make sure they go where they are most needed. Coordination amongst our countries is absolutely key in order to achieve the goals we wish to implement for the future.”

A new climate institution and way ahead

Mr. Stiglitz commended international organizations for the “very impressive way” they responded during the pandemic. But he said they were constrained by what the countries behind them wanted to do and that the same applies to the debt situation.

He said debt relief efforts have been “insufficient” in the context of the pandemic, and called for a “deep and timely, comprehensive restructuring”.

“There is a need for a better framework not only for debt restructuring but for dealing with problems of surcharges; and a better, independent framework for debt sustainability analysis,” he said.

He underscored the need to create new institutions to address the need for finance for climate change.

“I think a new global climate institution could both manage risks better, catalyze projects, and help facilitate a significant increase in the flow of funds that will help the emerging markets economies, developing countries face climate change,” said Mr. Stiglitz.

Similarly, Ms. Mottley called on the world to consider a “green debt” “with super long maturities and low-interest rates” to manage the climate crisis, and fiscal space to manage COVID-19’s impacts.

Watch the UNCTAD15 Ministerial Roundtable I