United Nations urges end to austerity, calls for ambition to rebalance global economy and achieve prosperity for all

The global economy appears stuck on its path to recovery. A new UNCTAD report, the Trade and Development Report 2017&#58; Beyond Austerity - Towards a Global New Deal, sets out an ambitious alternative policy route to build more inclusive and caring economies.

Launching the Trade and Development Report 2017, UNCTAD Secretary-General Mukhisa Kituyi said, "A combination of too much debt and too little demand at the global level has hampered sustained expansion of the world economy".

The report states that people should be put before profits, calling for a twenty-first century makeover to offer a global "new deal". Ending austerity, clamping down on corporate rent seeking and harnessing finance to support job creation and infrastructure investment will be key to such a makeover.

UNCTAD notes that the world economy in 2017 is picking up but not lifting off. Growth is expected to reach 2.6 per cent, slightly higher than in 2016 but well below the pre-financial crisis average of 3.2 per cent. Most regions are set to register small gains, with Latin America exiting recession and posting the biggest turnaround, even if only at 1.2 per cent growth. The eurozone is expected to see its fastest growth since 2010 (1.8 per cent) but is still lagging behind the United States of America. 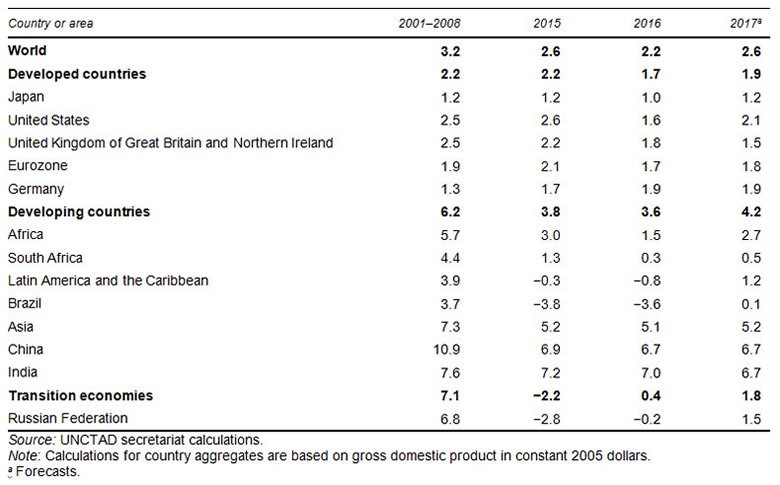 With insufficient global demand, trade remains sluggish. A minor improvement is expected this year, because of a recovery in South-South trade led by China. However, there is much uncertainty, especially with regard to commodities trade, where a brief recovery in prices has not been sustained).

In the absence of a coordinated expansion led by the advanced economies, sustaining the limited global economic acceleration hinges on lasting improvements in emerging economies. But while most large emerging economies avoided austerity between 2011 and 2015, and China and India have maintained robust growth rates since, they are now facing significant downside risks. Debt levels continue to rise without real signs of robust growth, and there are concerns about political instability, falling commodity prices, higher interest rates in the United States and a stronger dollar. Capital inflows to developing countries remain negative, albeit less so than in recent years. Furthermore, unforeseen events could knock recovering economies off balance. 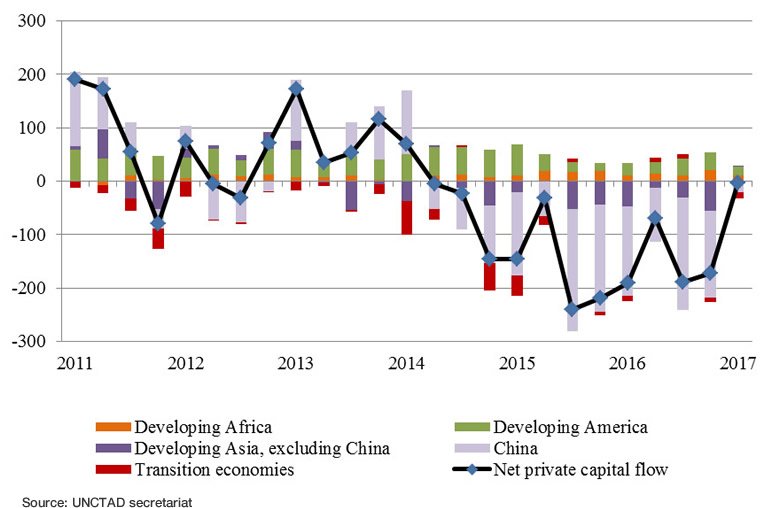 In the words of the lead author of the report, Richard Kozul-Wright, "Two of the biggest socioeconomic trends of recent decades have been a debt explosion and the rise of super-elites, loosely identified as the top 1 per cent." These, the report suggests, are linked through the deregulation of financial markets, to the widening ownership gap of financial assets and a fixation on short-term returns. As such, inequality and instability are hard-wired into hyperglobalization. The report shows that this makes for a world with insufficient levels of productive investment, precarious jobs and weakening welfare provision. This has become self-perpetuating, with the run-up to a crisis driven by the "great escape" of top incomes, while their aftermath is marked by austerity and stagnating incomes at the bottom.

A decade after sparking a massive global crisis that absorbed trillions of dollars of taxpayers' money in bailouts, the dominant financial sector has barely changed. Indeed, debt levels are higher than ever. However, the report also examines other sources of anxiety linked to robots and gender discrimination, which are affecting job prospects in developed and developing economies alike. While automation and increased female participation should be welcome developments, they appear threatening because they coincide with a world of austerity and excessive competition, leading to a race to the bottom in job markets. The result is a popular backlash against a system that is perceived to have become unduly biased in favour of a handful of large corporations, financial institutions and wealthy individuals. The report warns that failure to correct the excesses of hyperglobalization is not only jeopardising social cohesion but diminishing trust in both markets and politicians.

Needed: An alternative to market fundamentalism

The report argues that far too much has been made of trade and technology in explaining the troubles of a hyperglobalizing world. Instead it calls for a serious examination of market power, rent-seeking behaviour and "winner-take-most" rules of the game, which have generated exclusionary outcomes.

The growing concentration of markets is a major issue highlighted in the report, with potentially corrosive consequences for the political system.

As long as policymakers continue to brandish the austerity sword and measure policy success by asset prices and profit levels, big business will dominate in key sectors, and the already significant inequalities may worsen further.

Towards a global new deal: Summoning the spirit of 1947

Moving away from hyperglobalization towards building inclusive economies is not just a matter of making markets work better. It requires a more exacting and encompassing agenda that addresses global and national asymmetries in technological know-how, market power and political influence.

With the United States withdrawing from its role as global consumer of last resort, recycling surpluses is a key element in rebalancing the global economy. The report turns the spotlight on the eurozone - especially Germany - which is now running a large surplus with the rest of the world. The recent Group of 20 proposal made by Germany - a Marshall Plan for Africa - is welcome, but so far lacks the requisite financial muscle. The trillion-dollar Belt and Road Initiative of China is much bolder, even as its surplus has dropped sharply over the last two years.

The report draws lessons from 1947, when the International Monetary Fund, the World Bank, the General Agreement on Tariffs and Trade and the United Nations joined forces to rebalance the post-war global economy, and the Marshall Plan was launched. Seven decades later, an equally ambitious effort is needed to tackle the inequities of hyperglobalization to build inclusive and sustainable economies.

In response to the political slogan of yesteryear - "there is no alternative" - the report outlines a global new deal to build more inclusive and caring economies. This would combine economic recovery with regulatory reforms and redistribution policies, and do so with speed and at the requisite scale. The successes of the New Deal of the 1930s in the United States owed much to its emphasis on counterbalancing powers and giving a voice to weaker groups in society, including consumer groups, workers' organizations, farmers and the dispossessed poor. This is no less true today.

In today's integrated global economy, Governments will need to act together for any one country to achieve success. UNCTAD urges them to seize the opportunity offered by the Sustainable Development Goals and put in place a global new deal for the twenty-first century.

There is an alternative

Key measures discussed in the report include the following: