Why is climate change adaptation becoming important for international transport?

Transport has been traditionally looked upon as a challenge in terms of reducing greenhouse gas emissions, and a lot of effort has been rightly directed at that issue.

In recent years, however, with the Sustainable Development Goals and the Paris Climate Agreement, adaptation of transport to the future climate, once a 'poor relation' in terms of climate change response, is increasingly being recognised as vital to the continued success of mobility and global trade and development.

What's new is the growing realization that individual transport modes and their infrastructure - seaports, airports, rail routes, roads, inland waterways - have a collective interdependence on each other. 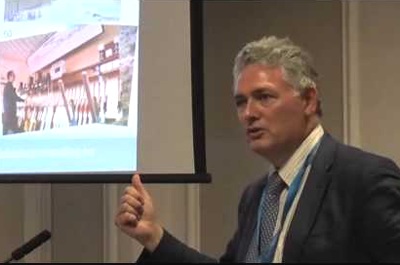 Transport is a ‘system of systems’ and resilience of each transport mode to the impact of future weather patterns along the entire network of global supply chains warrants consideration so that impacts, risks and vulnerabilities across transport modes are identified and addressed.

What kind of risks are we thinking about?

We can think about extreme weather and events – hurricanes/cyclones and floods - which can disrupt transport routes both inland and on the coasts. Other climate factors that may affect transportation include climate change-driven changes in temperature, humidity and precipitation.

Coastal transportation infrastructure, in particular seaports, will be impacted by sea-level rise, which will exacerbate coastal flooding during extreme storm events. Road and rail infrastructure, inland waterways and airports that are already prone to flooding may face more frequent inland flood events and deeper floodwaters under climate change.

There is a potential for infrastructure damage, as well as for disruption and delay, throughout global supply chains, which can have major economic impacts. In the light of what is at stake, there is an important need for greater focus on transport adaptation, as the discussions at the UNCTAD Ad-hoc Expert Meeting highlighted. Guidance and standards will play an important role in this respect.

Are any international sets of standards in place or being developed to aid transport and infrastructure providers?

In the summer, a new International Standard, ISO 14090 'Adaptation to climate change - Principles, requirements and guidelines' is to be published. I had the privilege of being the convenor of the international expert team that drafted it. ISO 14090 describes international best practice for adaptation that transport and other organisations can use to develop their own adaptation plans. It will be useful for others also with an interest - stakeholders like the finance sector. Investment banks - multilateral development banks, for instance, seek ways to verify that the loans they issue will be funding infrastructure that will be resilient to the future climate. Currently, much infrastructure is built to technical standards that relate to the past climate, not the future one. ISO 14090 will permit users to assess impacts on the infrastructure and the entire transport system and supply chain from the future climate perspective.

What is meant by technical standards and why are they important?

Technical standards are those used by engineers, for example, to design vehicles and infrastructure so they are safe - that bridges can carry the weight of vehicles, that drainage is designed to carry floodwaters, that cranes and towers are resistant to wind loads and so on. Generally, these standards relate to weather patterns in the past. For the future, we will need technical standards that factor in climate change.

It is important to note that individual organisations - infrastructure owners and operators - can produce their own specifications for climate resilience and need not wait for formal 'CEN' or 'ISO' standards, although ISO 14090 will provide a useful framework for adaptation.