Christelle Assirou, a serial entrepreneur from Côte d’Ivoire, is revolutionizing e-commerce in her country and beyond.

Ms. Assirou runs a business development and digital services firm, ICTINA, founded in 2015. An activist for the empowerment of women in the digital economy, last year she was named by UNESCO as one of the most remarkable women in technology.

Building on her success, Ms. Assirou has joined efforts to help women entrepreneurs in francophone Africa build the knowledge and skills they need to succeed in the digital economy.

She is among 19 participants in UNCTAD’s eTrade for Women initiative’s first masterclass in Africa taking place in Abidjan, Côte d’Ivoire, from 26 to 28 February.

She has contributed to the development of Côte d'Ivoire's internet and digital ecosystem as one of the pioneers of the promotion of free and open-source technologies in the country and francophone Africa.

“The masterclass will help us promote gender-inclusive wealth creation by involving more women in the digital economy,” Ms. Assirou said. 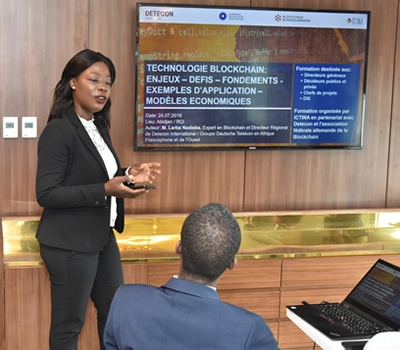 Christelle Assirou speaks about blockchain technology at a meeting.

The masterclass is the first of its kind to target women digital entrepreneurs in francophone Africa, a sub-region that could be home to 62.5% of the continent’s fastest growing economies by 2021, according to the World Bank.

Yet startups in francophone Africa received only 1% of the US$1.16 billion raised in equity by African tech startups in 2018, according to a report by Partech Africa.

The masterclass seeks to change the fortunes of women entrepreneurs by empowering and equipping them with the right tools to thrive in the rapidly changing digital economy.

“E-commerce is creating new opportunities for women in developing countries. It could accelerate poverty reduction and their inclusion in productive economic activities,” said UNCTAD’s director of technology and logistics, Shamika N. Sirimanne.

“However, to reap these opportunities, women require appropriate skills and a supportive policy framework, which is what we deliver through the e-Trade for Women Initiative,” she added.

Ms. Yao is among seven trailblazing women digital entrepreneurs from across the world selected by UNCTAD last year to serve as advocates and to inspire others for a more inclusive local, regional and global digital economy.

She founded her company, QuickCash, in 2010 to make it easier for rural people and workers in the informal sector to make money transfers. Since then, she has created two other firms and received various awards for her business achievements and social impact.

The Abidjan masterclass is the second in a series that UNCTAD plans to organize in various developing regions of the world. The first one took place in Skopje, North Macedonia, in October last year. It attracted more than 40 female entrepreneurs from the Balkan Peninsula.

“These classes are empowering women entrepreneurs to overcome hurdles, reap more benefits from the digital economy and develop their communities,” said Candace Nkoth Bisseck, UNCTAD’s project manager for the eTrade for Women initiative, funded by the Dutch government.

The masterclass will include sessions to address the specific challenges encountered by women entrepreneurs and offer networking and learning events. It will conclude with a policy dialogue with local decision-makers to inform policies that can make it easier for women to develop online businesses.

Participants will learn the ins and outs of growing an online business, such as search engine optimization and social media marketing, and how to turn raw data into digital intelligence.

They will also lay the grounds for the establishment of a regional eTrade for Women community, which will sustain this initial effort and help raise the profile of women digital entrepreneurs in their local ecosystems. 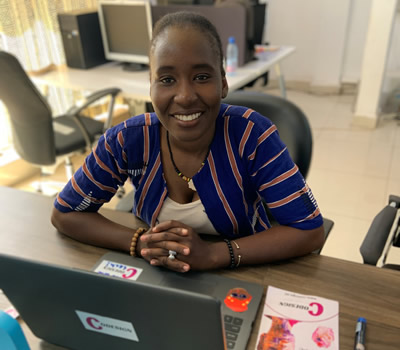 “It’s an opportunity to gain new skills to grow our ventures and a platform to network with fellow women entrepreneurs,” said Malian entrepreneur Aichatoun Touré, 24, also participating in the masterclass.

Ms. Touré founded the startup Codesign, which provides computer engineering services. She is a developer, an author and the secretary-general of Mussodev, an association that promotes women’s involvement in technology.

Her startup once organized a 10-day hackathon that brought together developers from Burkina Faso, Côte d’Ivoire, Mali and Togo to develop applications to stimulate the digital economy in Mali and the rest of Africa.

UNCTAD plans to hold masterclasses in other regions of the world in the coming months.

The efforts to empower women digital entrepreneurs are supported by the eTrade for all initiative, with the active involvement of the United Nations Capital Development Fund and the African Development Bank, two of its partners.