​China remained the trading nation best connected to others by sea in 2018 according to UNCTAD’s latest Liner Shipping Connectivity Index (LSCI), released alongside the Review of Maritime Transport 2018. The country’s LSCI number has increased by 88% since UNCTAD first compiled the index in 2004.

The best-connected territories for seaborne trade were all in Asia, with Singapore (2), Republic of Korea (3), Hong Kong (China) (4), and Malaysia (5) rounding out the Top 5, each with a score of more than 100 according to the index’s metrics.

At the other end of the table, the worst-connected territories, meaning trade in shipped goods remained problematic with knock-on economic effects, were Norfolk Island, Christmas Island, Cayman Islands, Bermuda and Tuvalu.

For maritime companies, it is more cost effective to concentrate cargo traffic in main global hubs. The most attractive maritime routes connect Eastern Asia and North America (transpacific eastbound) and Eastern Asia to Northern Europe and the Mediterranean (westbound).

Global maritime hubs are those countries that manage to benefit from being located at the crossroads of major shipping routes, providing world class logistics and transshipment services.

The LSCI is an indicator of a country’s position within the global liner shipping networks. It is calculated from data on the world’s container ship deployment: the number of ships, their container carrying capacity, the number of services and companies, and the size of the largest ship.

Since the index was first published by UNCTAD, Morocco has had the highest LSCI growth among African countries, with its number increasing by 661% between 2004 and 2018. In South-East Asia, Viet Nam’s LSCI number increased by 435% during the last 15 years, the highest growth in this region. In Latin America, the highest surge was recorded by Peru, at plus 196%. The strongest decline in their LSCI numbers in the last 15 years was recorded by Venezuela and Yemen.

The Review of Maritime Transport, first published in 1968, is UNCTAD’s longest-running flagship report and marks its 50th anniversary in 2018. 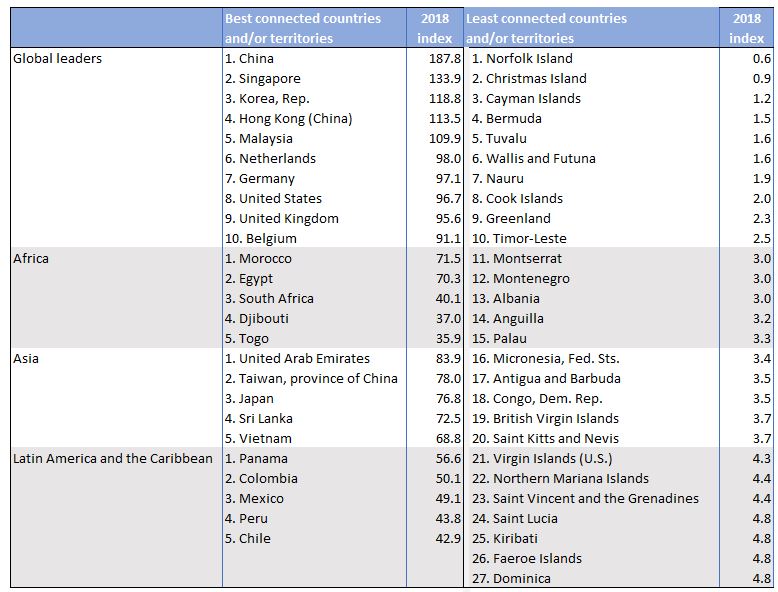