Global markets and spirits are up with the news that two COVID-19 vaccines have shown to be more than 90% effective in late-stage clinical trials.

But while there is growing confidence that an end to the health pandemic is in sight, an UNCTAD report published today warns that a viable vaccine will not halt the spread of economic damage, which will be felt long into the future, especially by the poorest and most vulnerable.

The report, Impact of the COVID-19 Pandemic on Trade and Development: Transitioning to a New Normal, provides a comprehensive assessment of the economic knock-ons, projecting that the global economy will contract by a staggering 4.3% in 2020 and warning that the crisis could send an additional 130 million people into extreme poverty.

The way the world economy is set up is partly to blame for the disproportionate impact on the world’s poorest, who lack the resources necessary to respond to shocks such as COVID-19, the report says.

“The COVID-19 pandemic has gravely wounded the world economy with serious consequences for everyone,” UNCTAD Secretary-General Mukhisa Kituyi said.

“Moving rapidly across borders, along the principal arteries of the global economy, the spread of the virus has benefited from the underlying interconnectedness – and frailties – of globalization, catapulting a global health crisis into a global economic shock that has hit the most vulnerable the hardest.”

The report finds the United Nations’ Sustainable Development Agenda 2030 will be derailed unless immediate policy actions are taken, especially in favour of the poorest. A better recovery must centre on renewed trade policy that tackles the twin challenge of market concentration and environmental impact, the report says.

It also notes there is a pressing need to reshape global production networks to be more green, inclusive, and sustainable while simultaneously resetting the multilateral system, to support the most vulnerable and deliver on climate action.

A crisis of uneven impacts…

In the report, UNCTAD tracks the deepening impact of the virus on all areas of the world economy and maps how the crisis has affected global trade, investment, production, employment and, ultimately, individual livelihoods.

It finds that the pandemic’s impact has been asymmetric and tilted towards the most vulnerable, both within and across countries, affecting disproportionately low-income households, migrants, informal workers and women, the report says.

Additionally, COVID-19 has had disproportionate effect on two sectors – tourism and micro, small and medium-sized enterprises – which employ many vulnerable groups.

For example, while older men may have suffered more from the health emergency, females and young people are most affected by the economic crisis. Across the 32 countries for which gender disaggregated data are available, the countries with higher COVID-19 incidence have seen greater increases in female unemployment than male.

These and other setbacks, such as school closures that threaten 20 years of progress in expanding access to education, especially for girls, will have strong negative impacts on the productive capacity of countries well into the future, the report finds.

The disparities caused by the COVID-19 crisis are glaring, and vaccine production and delivery will likely underscore the limited capacity of most developing nations, the least developed countries (LDCs), to respond to the crisis.

In addition, most poor nations simply do not have the needed safety nets in place to support their populations.

The report estimates that about 79.4% of workers in sub-Saharan Africa and 84.5% of workers in LDCs do not have access to any social protection or labour programmes.

The report calls for stepped-up international assistance, which would include offering debt relief to many poorer nations so that they have the fiscal space needed to address the pandemic’s economic impacts on their populations.

A roadmap for better recovery

In the report, the UN’s trade and development body provides a roadmap for recovery that requires an overdue and opportune shift in the structure of global trade and cooperation.

“COVID-19 has been painful and course-altering, but it is also a catalyst for needed change,” Dr. Kituyi said. “We need to reshape global production networks and reset multilateral cooperation for the better.”

Global production networks will play a critical role in producing and distributing the new vaccine, as they have in moving critical medical supplies during the crisis.

But vaccine deployment will likely expose long-entrenched inequalities in the global trading system that the report says must change to “recover better”.

“Now is the right time to address the weaknesses of globalization that led to the rapid spread of the virus around the world and its uneven economic impacts,” Dr. Kituyi said.

“Such efforts must go hand in hand with the arrival of potential vaccines to market, otherwise we risk reinforcing those inequalities that turned this health emergency into an economic crisis in the first place.”

The report says the crisis can be a catalyst for new, more resilient production networks based on value chains that are shorter, and more regional, sustainable and digital.

It is also a chance to make production greener. Global CO2 emissions are on track to decline by 8% this year, or 2.6 gigatons. This is roughly the same reduction that is needed annually for the next 10 years to maintain progress to just a 1.5-degree Celsius rise in global temperatures. As economies open back up, more needs to be done to ensure international production is in sync with the climate emergency.

“Much will depend on the policies adopted and ability to coordinate, both at the international and national levels,” Dr. Kituyi said. “Thus, despite the grim outlook, it is still possible to turn COVID-19 into the finest hour of the United Nations and build a more inclusive, resilient and sustainable future.” 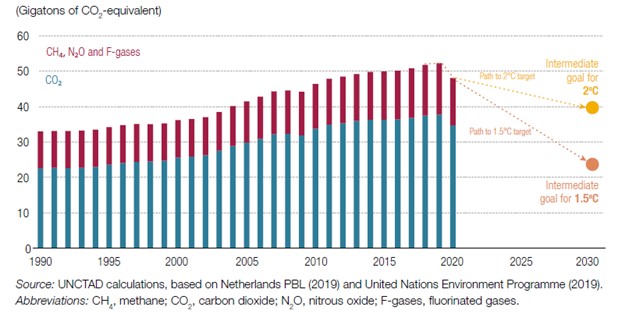