Digital Radically Changes Global Investment Patterns
In the first ranking of its kind, UNCTAD report shows that three countries are home to 75% of the top 100 digital multinationals

​What did not exist in 2007? Instagram, Uber and 30 of the top 100 digital multinationals, according to the World Investment Report 2017: Investment and the Digital Economy. Digital is growing and it is growing fast. The new report of the United Nations Conference on Trade and Development (UNCTAD) investigates the effect that digital is having on global investment patterns and reveals the top 100 digital multinational companies and their impact.

Digital multinational enterprises (MNEs), such as Internet platforms and electronic commerce (e commerce) and digital content firms, are expanding at a dramatically faster rate than other multinationals.

The World Investment Report 2017 includes a new list of the top 100 digital MNEs and their global footprint, and shows that some digital multinationals reached a massive scale in only a few years.

Digital MNEs make about 70% of their sales abroad, with only 40% of their assets based outside home countries. This results in the creation of fewer jobs directly in host countries. However, investments from digital MNEs can increase competitiveness and contribute to digital development.

The report also lists the top 100 global MNEs, and shows that between 2010 and 2015, the number of technology companies more than doubled. The assets of such companies increased by 65%, and their revenues and employees increased by about 30%, against flat trends for other multinationals in the top 100.

A lack of regional diversity in the ownership of digital firms is creating a concentration in global investment patterns. Over 60 of the top 100 digital MNEs are from the United States of America, followed by the United Kingdom of Great Britain and Northern Ireland and Germany. This concentration is more pronounced among Internet platforms: 10 out of 11 major digital multinationals in the ranking are from the United States.

“The digital economy has important implications for investment, and investment is crucial for digital development,” said Mukhisa Kituyi, Secretary-General of UNCTAD. “Developing countries cannot be left behind; we need to create enabling policies that close the digital divide in global investment,” he added.

Investment regulations and policies for the promotion of investment must also consider the new cross-border operating models of multinationals. Many industries are being impacted by digitalization; of the top 10 traditional industries most affected, 5 coincide with the top 10 industries in which countries maintain investment restrictions (see figure). Digital MNEs are expanding into other highly regulated sectors, and archaic regulations could become obsolete or an unintended drag on digital adoption.

Infrastructure investment requirements for achieving adequate digital connectivity for most developing countries could be less daunting than often supposed. UNCTAD estimates put the cost at less than $100 billion.

In the World Investment Report 2017, UNCTAD proposes investment policies that strengthen digital development strategies. This means creating and maintaining a conducive regulatory framework for digital firms, as well as active support measures, which may include establishing technology or innovation hubs; building or improving e-government services; and supporting venture capital funding and other innovative financing approaches. 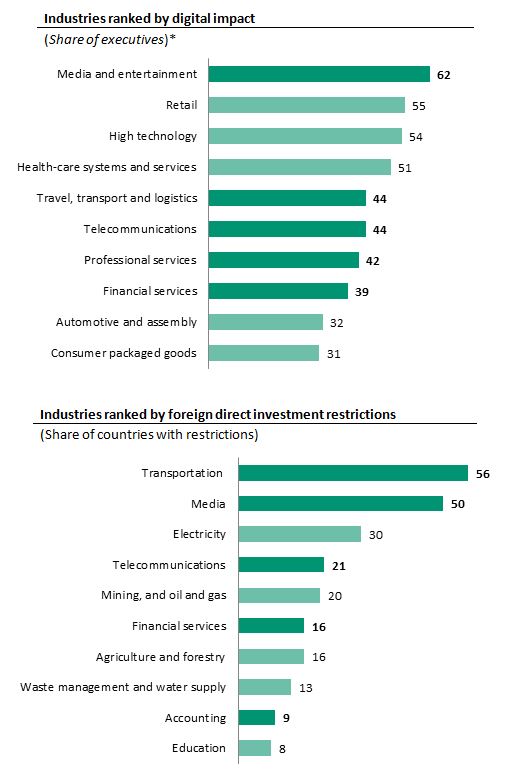