FDI into and out of transition economies reached record levels in 2013, according to UNCTAD report
World Investment Report warns that regional conflict could impact future FDI flows to South-East Europe and CIS

In the CIS, the rise in flows was due to the significant growth of FDI into the Russian Federation, which saw its FDI flows grow by 57 per cent, reaching $79 billion (figure 1). Foreign investors were motivated by continued strong growth in the domestic market coupled with productivity gains. They primarily used intra-company loans from parent companies to finance these investments in the Russian Federation.

Investors also continued to be attracted by high returns in energy and other natural resource-related projects, as illustrated by partnership deals in “hard to access” oil projects. The FDI surge was also due to the acquisition by BP of the United Kingdom of an 18.5 per cent equity stake in the Russian state-owned oil company Rosneft.

Meanwhile, political uncertainty in Ukraine in 2013 halved flows to $3.8 billion and FDI inflows to Kazakhstan declined by 29 per cent, to $10 billion, as some foreign banks divested their assets.

In South-East Europe, most of the FDI inflows were driven by privatizations in the services sector. In Albania, FDI inflows reached $1.2 billion. In Serbia and in Bosnia and Herzegovina, the jump in FDI can be ascribed to some major acquisitions.

Although developed countries were the main investors into the transition economies, developing-economy FDI has been on the rise. Chinese investors, for example, have expanded their presence in the CIS by acquiring either domestic or foreign assets.

During the past 10 years, transition economies have been the fastest-growing hosts for FDI worldwide. European Union (EU) countries have been important partners, both as investors and recipients, in this evolution. In transition economies, the EU has the largest share of inward FDI stock, accounting for more than two thirds of the total. In the CIS, EU investors are motivated by a desire to gain access to natural resources and growing local consumer markets, and to benefit from business opportunities arising from the liberalization of selected industries.

Data on cross-border M&As indicate that EU investments in transition economies were concentrated in finance, electricity, gas and water, information and communication, and mining and quarrying (figure 2). Transport, storage and communication, motor vehicles and other transport equipment, coke and petroleum products, electricity, gas and water were the main recipient industries of announced greenfield projects by EU investors (figure 2).

In South-East Europe, most EU investments are driven by the privatization of State-owned enterprises and by large projects benefiting from a combination of low production costs in the region and the prospect of association with or membership of the EU. The bulk of outward FDI stock from transition economies, mainly from the Russian Federation, is into EU countries. These investors increasingly look for strategic assets in EU markets, including downstream activities in the energy industry and value added production activities in metallurgy, to build global and regional value chains through vertical integration.

Looking forward, FDI in the transition economies is likely to be affected by uncertainties related to possible regional conflict. 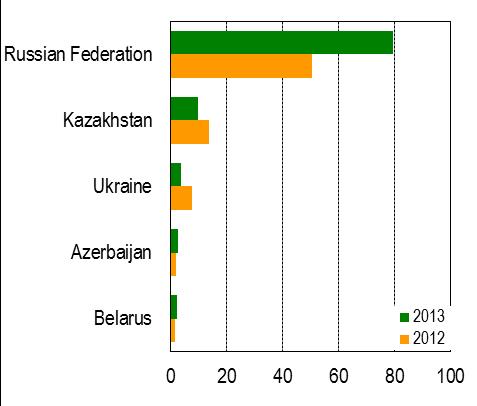 
Figure 2. Distribution of cross-border M&As and greenfield investment in transition economies concluded by EU TNCs, by industry, cumulative 2003–2013
(Per cent of total value) 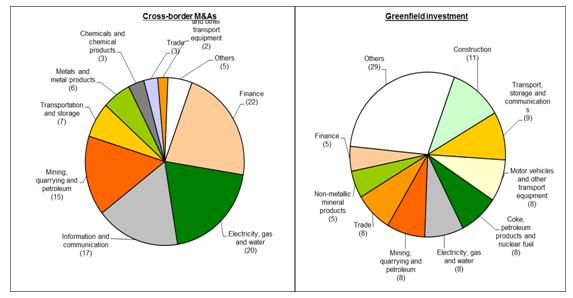