Africa escaped the global decline in foreign direct investment (FDI) as flows to the continent rose to US$46 billion in 2018, an increase of 11% on the previous year, according to UNCTAD’s World Investment Report 2019.

Growing demand for some commodities and a corresponding rise in their prices as well as the growth in non-resource-seeking investment in a few economies underpinned the rise.

While FDI in some large economies on the continent – such as Nigeria and Egypt – contracted, this was outweighed by a surge in flows to others, most significantly, South Africa.

FDI flows to North Africa climbed by 7% to $14 billion.

Investments in Egypt contracted (down by 8% to $6.8 billion), but the country continued to be the largest FDI recipient in Africa.

FDI to Morocco increased by 36% to $3.6 billion on the back of sizeable investments in finance and the automotive sector.

FDI flows to Sub-Saharan Africa climbed by 13% to $32 billion, recovering ground after successive contractions in the two prior years.

Southern Africa saw the biggest turnaround, with flows recovering to $4.2 billion after net divestment of $925 million the previous year.

FDI in South Africa more than doubled to $5.3 billion, although this was largely attributable to intracompany transfers by established investors.

FDI held steady at $9 billion in East Africa, the fastest-growing region of the continent.

Ethiopia topped the region, even as flows to the country declined by 18%, to $3.3 billion.

Flows to Kenya swelled by 27% to $1.6 billion, due to investment in diverse sectors, including manufacturing, hospitality, chemicals and oil and gas.

Flows to Ghana also dipped, albeit by a more moderate 8%, to $3 billion.

Multinational enterprises from developing countries are expanding their activities in Africa but investors from developed countries remained the key players.

Based on data through 2017, France is the largest investor in Africa, although its stock of investment has remained largely unchanged since 2013, followed by the Netherlands, the United States, the United Kingdom and China.

Growing demand and a corresponding rise in the price of commodities, of which Africa is a key producer, are expected to prop up FDI flows to the continent in 2019.

While investment in manufacturing and services is likely to be sustained, this is expected to be confined to a few countries in North and Southern Africa, and the emerging manufacturing hubs in East Africa.

The growing number of special economic zones (SEZs) could become another factor in drawing investment to the continent in the coming years.

There are an estimated 237 SEZs in Africa, some still under construction, along with more than 200 single-enterprise zones (so-called free points).

SEZs operate in 38 of the 54 economies on the continent, with the highest number in Kenya (61).

The three largest economies of the continent – Nigeria, South Africa and Egypt – all have well developed SEZ programmes.

Many smaller economies have only established SEZ frameworks in the last decade and tend to have fewer zones.

In 2018, Burkina Faso, Côte d'Ivoire and Mali launched an SEZ spanning border regions of the three countries. Similarly, Ethiopia and Kenya recently announced their intention to convert the Moyle region into a cross-border free trade zone. 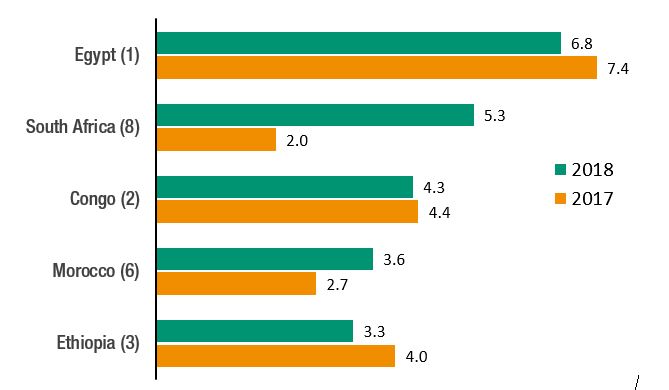 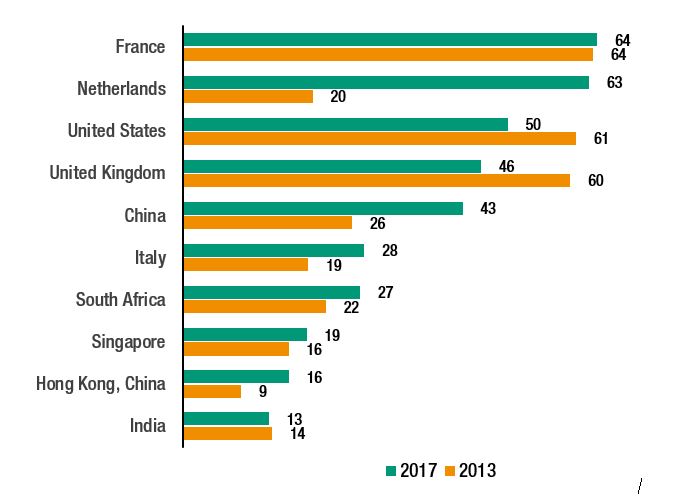 Source: World Investment Report 2019.
Note: Numbers presented in this figure are based on the FDI stock data of partner countries. 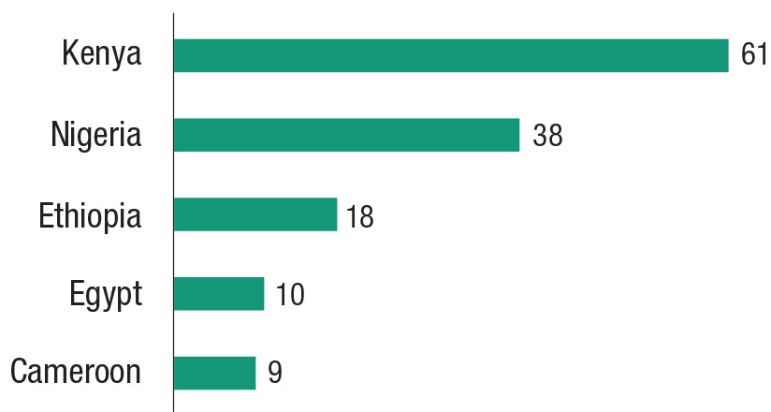