​Foreign direct investment (FDI) inflows to South Asia rose to $41 billion in 2014, primarily owing to good performance by India (Figure 1), according to UNCTAD's World Investment Report 20151. FDI inflows to the country surged by 22 per cent to about $34 billion.

FDI inflows to India are likely to maintain an upward trend in 2015 as economic recovery gains ground, the report adds. In terms of the sectoral composition of FDI inflows, manufacturing is likely to gain strength, as policy efforts to revitalise the industrial sector are sustained, including, for example, the "Make in India" initiative launched in mid-2014.

The report says that FDI inflows to Pakistan increased by 31 per cent to $1.7 billion as a result of rising Chinese FDI flows in services. Furthermore, the country will benefit significantly from the China-Pakistan Industrial Corridor and associated Chinese investment in infrastructure and manufacturing in the overall context of implementing the "One Belt, One Road" strategy. According to agreements signed between the two governments in April 2015, Chinese companies will invest about $45.6 billion in Pakistan over the next few years − $33.8 billion in electricity and $11.8 billion in transport infrastructure.

In Sri Lanka, FDI flows from China also rose (China has become the largest source of FDI to the country in recent years). For example, a joint venture between two local companies and China Merchants Holdings (International) Company has invested $500 million in Colombo International Container Terminals, the largest foreign investment project in Sri Lanka. After two years of construction, the port started operation in August 2014. A China-Sri Lanka free trade agreement will be signed in June 2015. Moreover, if the implementation of the China-led 21st Century Maritime Silk Route Economic Belt gains ground, an increasing amount of Chinese investment will flow to Sri Lanka, particularly in large infrastructure projects.

In the manufacturing sector in South Asia, the report says that FDI success stories have emerged at country-, industry- and local-levels, with the automotive industry in India showing how large-scale FDI inflows can reshape the trajectory of industrial progress in low-income countries.

The automotive industry is a key part of the Indian economy and has been identified as one of the key industries in which India has the potential of becoming a world leader. According to data from the Indian government, accumulated FDI inflows to the automotive industry from April 2000 to November 2014 amounted to $11.4 billion. The country accounted for the majority of greenfield investment projects announced by global automakers and first-tier parts suppliers in South Asia during 2013–2014, including 12 projects above $100 million.

Inward FDI has led to the emergence of a number of industrial clusters in India, including those in the National Capital Region (Delhi-Gurgaon-Faridabad) in the north, Maharashtra State (Mumbai-Nasik-Aurangabad) in the west, and Tamil Nadu State (Chennai-Bangalore-Hosur) in the south (Figure 2). Though considerable differences exist in the patterns of the formation of these clusters, FDI can play an important catalytic role. For example, the early entry of Suzuki (Japan) has contributed to the development of an industrial cluster in the National Capital Region.

On a smaller but significant scale, Bangladesh, Nepal, Pakistan and Sri Lanka recorded cases of greenfield investment announced by foreign companies during 2013–2014. In 2013, for example, Mahindra & Mahindra (India) announced a more than $200 million investment in a plant producing light trucks and utility vehicles in Bangladesh. Investment from the growing automotive industry in India shows potentials of a positive "spill-over effect" to productive capacity building in South Asia as a whole. 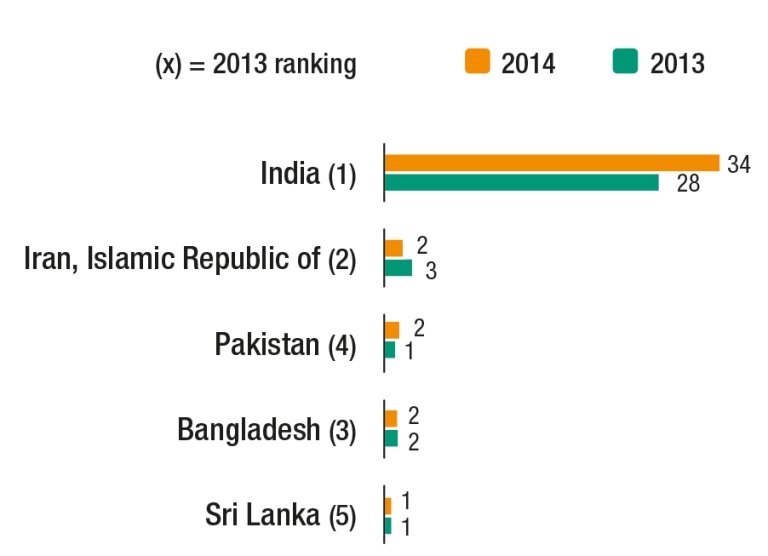 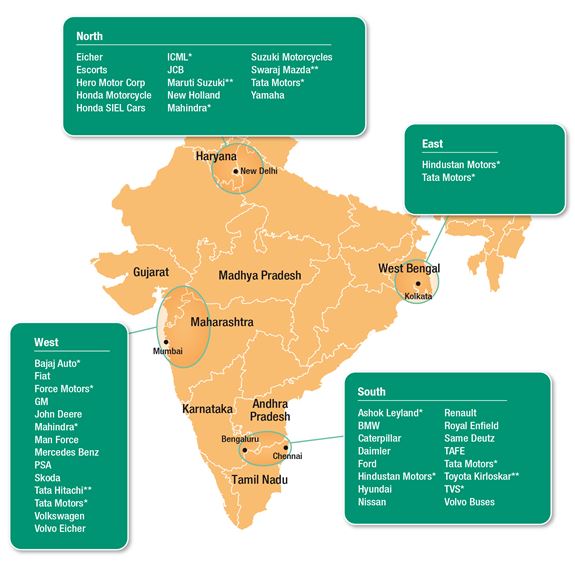 Source: UNCTAD, based on the Automotive Component Manufactures Association of India.
Note: Companies listed in the boxes are major manufacturers in each cluster; companies marked with an asterisk are Indian domestic companies; companies marked with two asterisks are joint ventures between Indian and foreign companies.
The boundaries and names are shown and the designations used on this map do not imply official endorsement or acceptance by the United Nations.