While small in terms of global FDI inflows (1.9 per cent), FDI inflows to LDCs continued to grow and reached $28 billion in 2013. While inflows to some larger host LDCs fell or stagnated, Mozambique, Myanmar and Sudan (figure 1) as well as Ethiopia saw major gains.

The number of announced greenfield FDI projects – or new investment projects – in LDCs reached a record high, and their value reached the highest level in three years. The driving force was robust gains in the services sector (especially in energy, transport, storage and communications), contributing 70 per cent of total greenfield FDI.

Announced greenfield FDI from developed economies was at a 10-year high, led by two large energy investments from Iceland (to Ethiopia) and Japan (to Myanmar) (table 1). The Ethiopia project received support from the Government of the United States as part of the six-nation Power Africa initiative.

In terms of announced greenfield investments from developing economies, India remained the largest despite a 21 per cent fall in the value of announced investments in LDCs. South Africa was the second largest, followed by Nigeria as third.

The surge in announced greenfield FDI in the services sector mirrors the growing announcements of projects – including domestic and non-equity modes of investment – in energy/power, telecommunications, transportation and water/sewerage infrastructure in LDCs.

From 2003 to 2013, nearly 290 announced infrastructure projects – including domestic and non-equity modes of investment – were registered in LDCs. The cumulative costs amounted to $332 billion (about $30 billion a year), of which more than 40 per cent was attributed to 142 projects that were financed partly or fully by foreign sponsors (including public entities, such as multilateral organizations). A substantial portion of foreign and unspecified contributions to announced infrastructure projects, however, has not generated FDI inflows. This can be due to the modes of finance – such as non-equity modes of investments by foreign investors, debts, structured finance, or bilateral or multilateral donor funding – that is not captured by the FDI statistics. It is also possible that some announced projects may have been cancelled or never realized. 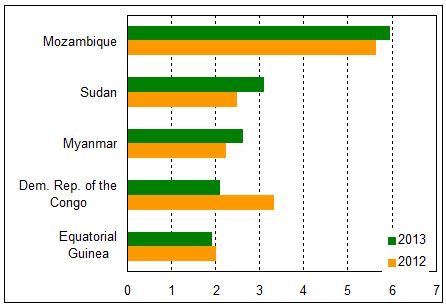