Many developing countries, unable to climb the economic ladder, trapped in the low- or middle-income bracket
UNCTAD proposes the adoption of productive transformation policies designed to diversify output and facilitate production upgrade

Many low- and middle-income economies are not catching up with rich-world counterparts, according to recent UNCTAD analysis, showing that even as extreme poverty has declined, wider development gains have stalled and “income traps” remain intractable for billions of people. The problems of these economies and a package of policies needed to escape income traps will be discussed at a round table on 20 July 2016 during the fourteenth session of the United Nations Conference on Trade and Development – UNCTAD 14, the four-yearly ministerial meeting taking place in Nairobi.

Income traps arise when the structural changes needed to speed up and sustain economic growth as countries climb the development ladder become increasingly challenging. But, as the experience of such East-Asian economies as Hong Kong (China) and the Republic of Korea, and more recently (and at lower levels of income) China and Malaysia, shows, income traps can be avoided.

In all of these catch-up economies, albeit to varying degrees, new production and export capacity was sequentially developed in industries (for example, iron, steel and electronics) using skills and capabilities transferred from existing industries, but also by the “comparative-advantage defying” intervention of policymakers. This strategic increase in high “connectivity” sectors allows a systematic transition towards more sophisticated and higher value added activities to be undertaken that eventually lead to closing productivity gaps.

Statistical analysis undertaken by UNCTAD (see figure) shows that in the last 25 years, the income gap in 1990 between developing countries and the developed member countries of the Organization for Economic Cooperation and Development (OECD) has persisted in many cases, and in some countries has even grown wider. It has reduced at annual rate faster than 1 per cent in only nine economies. This highlights the lack of convergence with leading economies.

While most economies that have experienced relatively fast convergence come from South and South-East Asia, many countries in Latin America, as well as in the Middle East and North Africa, have not made much progress. Notable exceptions include Chile and Mauritius.

UNCTAD data also show that in 2014 around half of developing countries had a per capita income lower than 15 per cent of the OECD average. For these countries, catching up with leading economies remains decades away even if they were able to replicate the stellar performance of an economy such as that of the Republic of Korea.

Late-developing countries can reap “easy” productivity gains by shifting workers from underemployment in agriculture to export-oriented urban manufacturing but, as an economy grows richer, the pool of underemployed rural labour will eventually be absorbed and real wages in urban manufacturing will begin to rise.

Beyond this developmental turning point, productivity growth from moving rural surplus labour into manufacturing needs to be replaced by productivity growth from using better technology. Developing countries must therefore progressively acquire the capabilities needed to develop new products and production techniques or to adopt (and adapt) advanced technologies developed abroad. Most of them, however, still lack the proper institutional and production mix that would allow them to develop or make use of knowledge-intensive products. This explains why economic growth may suddenly come to a stop, and convergence remains unachieved.

There are five elements, according to UNCTAD, that are important for the success of policies designed to help governments escape income traps. 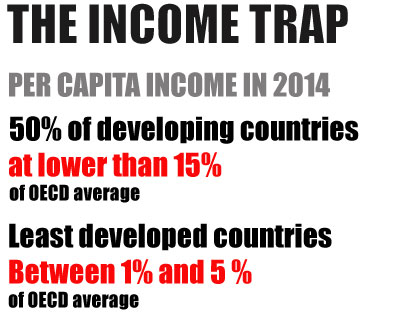 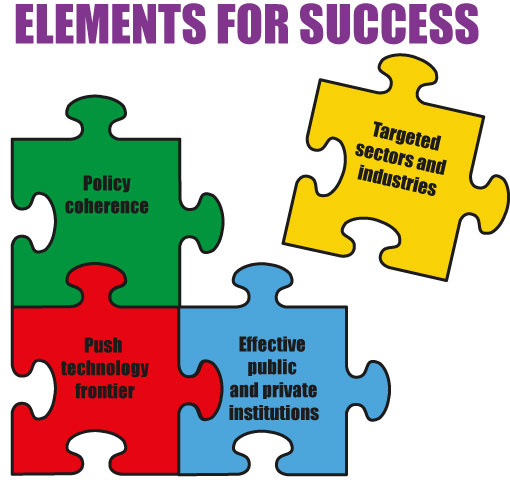