​Flows of foreign direct investment (FDI) into Latin America and the Caribbean – excluding the Caribbean offshore financial centres – decreased by 14 per cent to $159 billion in 2014 after four years of consecutive increases, according to UNCTAD's World Investment Report 20151.

This was mainly the consequence of a 72 per cent decline in cross-border mergers and acquisitions (M&As) in Central America and the Caribbean and of lower commodity prices, which reduced investment in the extractive industries in South America, the report says.

The decline took place in both sub-regions but was larger in Central America and the Caribbean (36 per cent to $39 billion) where inflows returned to their normal values after unusually high levels reached in 2013 (due to a cross-border mega deal that took place in the brewery industry in Mexico that year).

Flows into South America continued to decline for the second consecutive year, down 4 per cent to $121 billion, with all the main recipient countries, except Chile, registering negative FDI growth.

Brazil continued registering slight declines in FDI inflows for the third consecutive year, but remained the region´s first FDI target with inflows amounting to $62 billion, down 2 per cent (Figure 1). This stability hides different rates by sector. There was a strong decline in the primary sector (down by 58 per cent to $8.4 billion), which was offset by increases in manufacturing and services by 5 and 18 per cent to $22 billion and $33 billion respectively.

Chile recovered its place as the region's second largest target for FDI inflows. Inflows rose by 38 per cent to $23 billion, boosted by exceptionally high levels of cross-border M&A sales that increased more than three-fold to $9 billion.

Mexico was the third largest FDI recipient in 2014, although inflows almost halved to $23 billion due to a drop in cross-border sales after exceptional levels were reached in 2013. This was intensified in 2014 by the $5 billion divestment by AT&T (United States) of its stake in América Móvil. 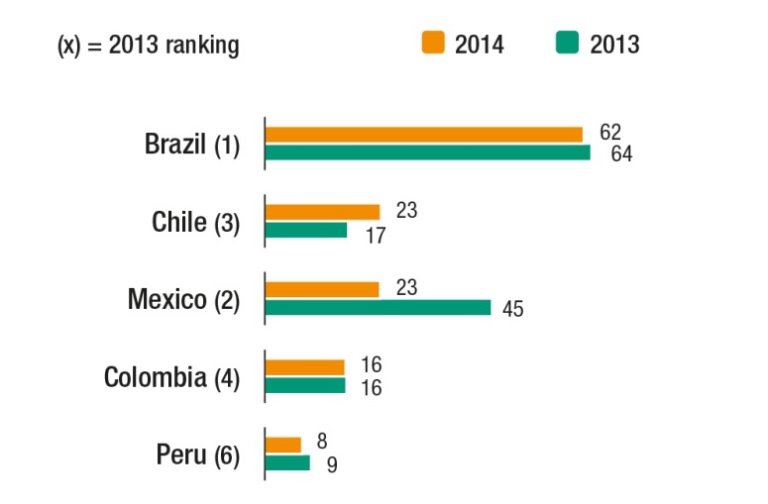 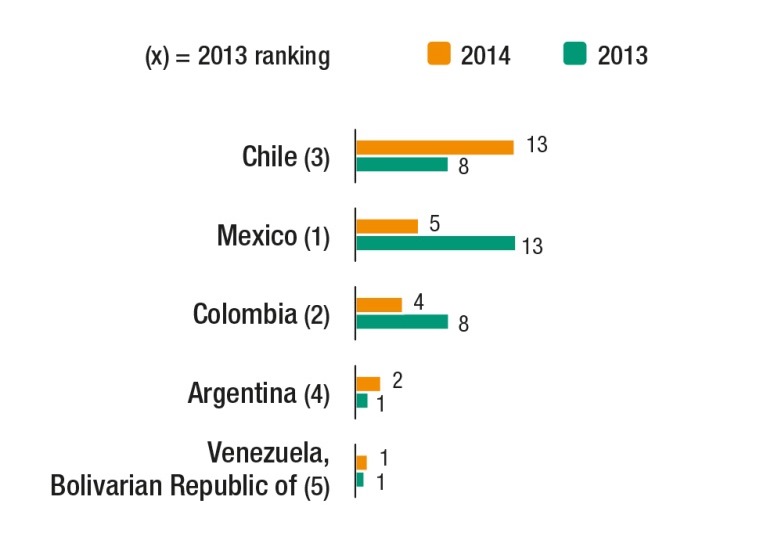 Declining investments in the extractive industry affected flows into Argentina (down by 41 per cent), Peru (down by 18 per cent) and the Bolivarian Republic of Venezuela (down by 88 per cent). Inflows remained stable to Colombia despite the strong decline of FDI in the extractive industries (down by 21 per cent to $6.4 billion) because this was offset by FDI rises in manufacturing, finance, transport and communications.

In Panama − after strong growth was registered in 2013 (up by 56 per cent) – inflows remained close to $5 billion as the peak in large-scale foreign investment related to the expansion of the Panama Canal passes. In Costa Rica, flows decreased by 21 per cent to $2.1 billion due to the closure of an Intel factory and Bank of America's business operations.

Flows to Trinidad and Tobago increased by 21 per cent as the result of the $1.2 billion acquisition of the remaining 57 per cent stake in Methanol Holdings Trinidad Limited (MHTL) by Consolidated Energy Company (Mauritius). The Dominican Republic registered an 11 per cent increase of FDI flows to $2.2 billion, explained partly by increased investment in free zones.

Outward FDI from Latin America and the Caribbean, excluding offshore financial centres, decreased by 18 per cent to $23 billion, dragged down by a halving of the value of cross-border purchases to $8.4 billion. Owing to the high incidence of intracompany loans and significant investments that were directed to offshore financial centres, outward FDI data may not accurately reflect the reality of productive investment.

Brazil ranked last as the region's outward direct investor, registering negative flows (-$3.5 billion) for the fourth consecutive year, but it remained the region's largest outward direct investor in terms of equity capital outward flows, which increased by 32 per cent to $20 billion in 2014 (half of which was directed to tax heavens). This is explained by the high amounts of loans from foreign affiliates to parent companies in Brazil.


Chile was the region's main direct investor abroad in 2014, with flows increasing by 71 per cent to $13 billion (Figure 2), despite a 26 per cent decline in equity capital outflows. This was due to a strong increase in intracompany loans. Mexico − the region's second largest outward investor − saw a 60 per cent decline in outward FDI flows, to $5.2 billion, caused mainly by a fall in intracompany loans.

After more than a decade of strong growth driven by South America (Figure 3), FDI outlook in Latin America and the Caribbean seems bleak, the report concludes.


The report says that the current slowdown in FDI flows to the region is an occasion for a reflection on the experience of FDI flows during the last two decades. In the context of the post-2015 development agenda, policymakers may consider potential policy options on the role of FDI for the region's development path.