​UNCTAD has launched its annual Handbook of Statistics in a new, user-friendly format to celebrate its fiftieth year of publication. The 2017 edition has been overhauled entirely to make it shorter and easier to read, and features a wealth of maps, charts, and infographics.

“The release of our new-format Handbook of Statistics is particularly timely ahead of next week’s Eleventh Ministerial Conference of the World Trade Organization,” UNCTAD Deputy Secretary-General Isabelle Durant said. “Reliable statistical information is essential to support, evaluate and guide policy choices for all nations, and notably developing countries, providing them with tools that are not always easy for them to produce. Such tools are indispensable, both for their national economies and development, and to better integrate them into the global economy,” she added.

Based on the wealth of statistics on international trade, investment, development and population, validated and processed by UNCTAD and made available in UNCTADstat, the Handbook of Statistics provides a coherent overview of trends worldwide and novel summary analyses of countries, regions and sectors.

For example, this year’s handbook reveals that 2016 was a difficult year of African economies. This was particularly evident in merchandise exports, which fell by 10.5%. Decreasing volumes of goods loaded in seaports for international shipment (-1.3%) and falling foreign direct investment receipts (-3.5%) also illustrated the challenges. Nevertheless, for the region, GDP grew by a modest 1.7%.

Several factors contributed to this picture: Africa's exports remain characterized by low product diversification (see figure 1) and a high dependency on raw materials compared with other regions of the world.

In recent years, decreasing commodity prices have led to deteriorating terms of trade. This deterioration was reflected in large trade deficits for manufactured goods, which were not outweighed by trade surpluses for primary products. Consequently, Africa ran a merchandise trade deficit, as percentage of exports, much higher than other developing regions (see figure 2). In 2016, Africa's current account deficit reached 6% of GDP. 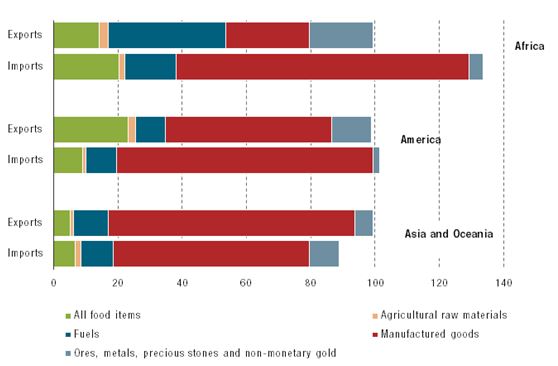 The continent's isolated position in the global liner shipping network (as indicated by the UNCTAD liner shipping connectivity index), low exports of trade-in-services and declining inward foreign direct investment all combined to further challenge economic development in the region.

However, other statistics, available in the Handbook of Statistics, indicate some favorable trends for African economies. Since June 2016, for example, the UNCTAD commodity price index has been increasing year-on-year. The current account deficit of many African economies stabilized in 2016 and stopped rising. Looking at demographic trends, the proportion of people of working age in Africa is expected to grow rapidly, yielding a demographic dividend and a positive effect on labor supply.

The handbook also illustrates the importance of trans-continental and intra-region trade and how they vary across continents. In 2016, the exchange of goods between China, the United States of America and Germany amounted to almost US$1 trillion – 6% of world merchandise trade (see figure 3).

In 2016, 69% of the European exports remained within Europe and 59% of the Asian exports, in Asia. By contrast, for Northern America, Latin America and the Caribbean and for Africa, most exports were delivered to economies in other continents than that of the exporter (see figure 4).

“In addition to such novel analyses, the handbook provides readers – decision-makers, policymakers, research specialists, academics, journalists, representatives of civil society, and more – with unparalleled access to cross-country comparable sets of global data,” Ms. Durant said. “In today’s interconnected world, valuable data are a crucial resource, and as part of our technical assistance mission, UNCTAD will continue to offer this resource for all players.”