UNCTAD sets out actions to support least developed countries in the global low-carbon transition
New report says COP27 is an opportunity to accelerate action to achieve mutually beneficial climate and development goals in the world's most vulnerable countries. 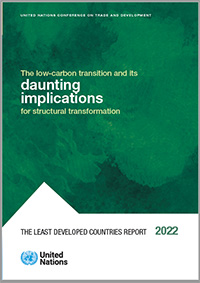 As nations convene for the 27th UN Climate Conference (COP27), the UN Conference on Trade and Development (UNCTAD) has set out the actions needed to ensure global efforts towards a low-carbon future don’t leave least developed countries (LDCs) behind.

UNCTAD’s Least Developed Countries Report 2022 published on 3 November says LDCs are the "litmus test" against which history will judge how effectively efforts to make the low-carbon transition consider development needs and countries’ different obligations and capacities to fight climate change.

The world’s 46 LDCs, home to about 1.1 billion people, have contributed minimally to CO2 emissions. In 2019 they accounted for less than 4% of total world greenhouse gas emissions. Yet over the last 50 years, 69% of worldwide deaths caused by climate-related disasters occurred in LDCs.

International support for LDCs is critical to address intertwined challenges that threaten their development and make them pay a disproportionately high price in addressing climate change.

LDC economies largely depend on exports of commodities such as minerals, metals and fuels, which entail high CO2 emissions and are often inputs to carbon-intensive global value chains including metal products, cement, fertilizers or electricity.

Between 2018 and 2020, some 80% of the LDCs were classified as commodity-dependent, meaning more than 60% of their merchandise exports consisted of primary products.

Therefore, the global drive to reduce carbon emissions may adversely affect LDC export sectors, the report warns. The more than two thirds of LDCs whose economies depend on the export of high-carbon-emitting commodities could face severe fiscal constraints and loss of economic output should the extraction of such commodities suffer a steep cutback.

The vulnerability caused by LDCs’ narrow export bases and high dependence on food imports has been compounded by the impacts of the war in Ukraine on global markets and the COVID-19 pandemic, which pushed an additional 32 million people in LDCs into extreme poverty (living on less than $1.90 a day) in 2020 alone.

While boosting LDCs’ export capacity remains critical, UNCTAD urges these countries to use sustainable production methods and invest more in building new productive capacities and expanding their existing ones, especially in low-carbon activities.

LDCs should also promote domestic value addition and stronger inter-sectoral production linkages, without which further extraction of resources will continue to degrade the environment but fail to redress the underdevelopment resulting from the commodity-dependence trap.

The report calls for a "green structural transformation" to reduce poverty in LDCs and enhance their resilience to better manage, adapt and respond to climate risks.

A green structural transformation combines economically, socially and environmentally responsible growth and structural economic transformation. It consists of a transition from carbon-intensive "sunset" sectors to low-carbon "sunrise" economic activities, promoting the efficient use of resources (materials, energy, land, water) along the development path.

UNCTAD says a green structural transformation is a paramount policy objective for LDCs – and many other (non-LDC) developing countries – because it combines their development imperatives with climate considerations.

The report raises concern that LDCs, which are marginalized in global trade, now face additional headwinds because of the environmental policies of their trade partners.

Any trade partners’ policies targeting the carbon emissions generated in the production of exported goods could have a strong dampening impact on LDC exports, even indirectly if LDCs are exempted.

The report says such policies could have serious consequences if they were to displace polluting industries out of developed countries and into LDCs as a way for the former countries to meet their commitments to reduce CO2 emissions – this is known as carbon leakage.

UNCTAD urges the international community to consider the interests of LDCs and avoid policy measures that limit these countries’ policy space and increase the likelihood of pollution havens emerging among them.

The report says the global decarbonization challenge calls for a "systems reboot" in international support for LDCs, which account for about 22% of countries with the most recurring appeals for funds in reaction to extreme weather crises.

Despite an urgent plea from climate-vulnerable countries, there remains no international agreement on financing costs related to loss and damage from fast-onset events related to climate change.

Also, LDCs are highly exposed to risks, which are aggravated by the failure of developed countries to meet the annual $100 billion goal in climate finance they originally promised to achieve by 2020 to support developing nations to adapt to the climate crisis.

UNCTAD urges development partners to extend special and differential treatment to LDCs by providing targeted, sufficiently flexible, and long-term finance. This entails fulfilling their climate finance commitments and raising their level of ambition on financing targets.

This should ideally be additional to funds from donor countries fulfilling their commitment to provide official development assistance to LDCs corresponding to 0.15% to 0.20% of donors’ gross national income.

In addition, urgent steps are needed to enhance technology transfer to LDCs and boost their institutional capacities by vastly scaling up technical assistance and capacity-building support to all areas of the low-carbon transition, including data and statistical capabilities.

UNCTAD also urges LDCs to adopt "green industrial policies" that accelerate the transition from carbon-intensive to low-carbon industries. This entails promoting the adoption of green technology and innovation and building an environment conducive to technological upgrading and broader innovation.

They should also strengthen their capacities to mobilize domestic resources to help finance their low-carbon transition, since their development financing needs far exceed their official development assistance.

The report says this will involve revamping taxation, redoubling efforts to reduce and eventually eliminate illicit financial flows and retrofitting the roles of public development banks and central banks.