African countries must diversify their exports to survive economic shocks from global crises such as the COVID-19 pandemic and the war in Ukraine, says the United Nations Conference on Trade and Development (UNCTAD).

Despite decades-long efforts to diversify, 45 out of the continent’s 54 countries remain dependent on exports of primary products in the agricultural, mining and extractive industries.

UNCTAD considers a country to be dependent on commodities when these products make up more than 60% of its total merchandise exports. The report outlines how African countries can rethink efforts to diversify their economies.

She said Africa has enormous potential to break commodity dependence and ensure its effective integration into high-end global value chains.

“By addressing barriers to trade in services, boosting relevant skills and improving access to innovative alternative financing, the region’s manufacturing productivity can be enhanced, driving Africa’s economic growth and structural transformation for many years to come,” Ms. Grynspan added. 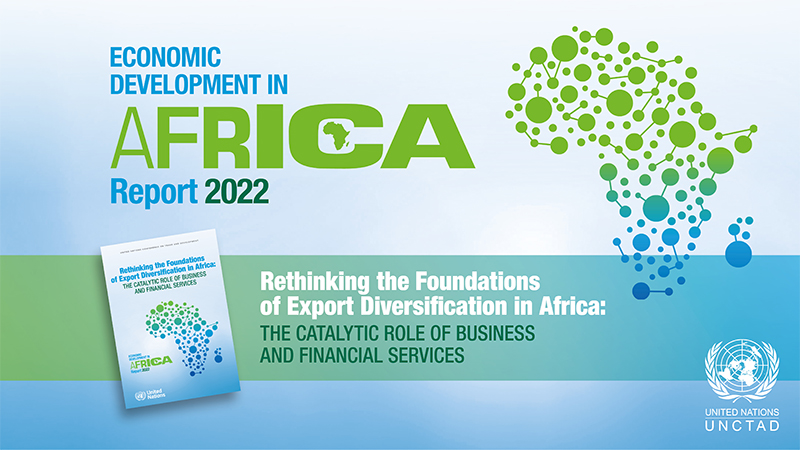 UNCTAD says high knowledge-intensive services, such as information technology and financial services, could be a game-changer for Africa. But they account for only 20% of the continent’s services exports, leaving immense room for growth.

Trade in services is also low in Africa. Between 2005 and 2019, services made up only 17% percent of the continent’s exports. Travel and transport accounted for about two thirds, representing a high concentration of traditional service sectors.

To change its fortunes, UNCTAD says the continent should promote the use of high knowledge- and technology-intensive inputs to enable the manufacture and export of more complex goods and services rather than primary commodities.

The report says technologies and smart services such as blockchain can improve access to diverse and competitive markets both within and outside the continent. More trade in services can also reduce the environmental degradation caused by the exploitation of natural resources.

To diversify economies, UNCTAD calls on African countries to implement policies to better link trade in high-value services with other sectors, especially manufacturing.

Countries also need to cut costs of services trade, remove protectionist policies, expand digitalization and boost the skills of workers in the sector.

The report also underscores the critical role of the private sector – both formal and informal – in diversifying and transforming Africa’s economies.

This includes small and medium enterprises (SMEs), which account for about 90% of firms on the continent and employ around 60% of its workforce.

Africa has about 50 million formal SMEs, which can help diversify the continent’s exports, but they have an unmet financing need of $416 billion every year, according to the International Finance Corporation.

UNCTAD says countries should better position African SMEs as engines of diversification by facilitating their access to affordable funds and financial services.

Given the huge financing needs and the difficult access to banks’ corporate loans, the report calls for more innovative financial instruments for African SMEs to secure access to financing.

UNCTAD urges African policymakers to help firms access specialized financial and non-financial products and services such as government loan guarantees that can better address the long-term financial needs of SMEs.

UNCTAD also calls on countries to tackle other hurdles facing African SMEs, such as poor integration to regional and global markets and lack of capacity to compete with large public and private firms.

The African Continental Free Trade Area, which aims to create a single market for the continent’s 1.4 billion people, can also boost export diversification, the report says.

But to make the best of it, African countries must implement policies to boost productive capacities, industrialization, encourage investment, improve regional integration and infrastructure.

As the world faces a cost-of-living crisis, 58 million people living just above the poverty line in Africa are at risk of sliding into poverty due to the combined effects of the COVID-19 pandemic and the war in Ukraine, according to a recent report of the Global Crisis Response Group on Food, Energy and Finance.

UNCTAD is the UN’s leading institution dealing with trade and development. It is a permanent intergovernmental body established by the United Nations General Assembly in 1964.

UNCTAD is part of the UN Secretariat and has a membership of 195 countries, one of the largest in the UN system. UNCTAD supports developing countries to access the benefits of a globalized economy more fairly and effectively.