​Getting the world economy back on track requires that global leaders use bolder macroeconomic policies, strengthened regulation of finance and active industrial policies, the United Nations Conference on Trade and Development (UNCTAD) said today.

In its annual Trade and Development Report, the United Nations body argues that economic slowdown in the advanced economies is the biggest drag on global growth, but developing countries are now caught in the downdraft.

A year of living dangerously
In many developed countries, a stringent fiscal stance and at times outright austerity have led to one of the weakest recoveries from an economic crisis on record. This has come on top of a prolonged period of slow wage growth, leading to insufficient household demand and weak spending on productive investment.

Growth in the United States of America is expected to slow to 1.6 percent this year, a full percentage point below the average for 2014–15 (2.5 percent). The momentum that was built through the quick detoxification of the United States banking system and the more aggressive use of monetary policy seems to be losing traction. Unemployment in the United States has dropped steadily to the level registered before the crisis hit (an average of 4.9 percent for the first half of 2016), and real earnings have begun to pick up. In a longer-term perspective, however, these improvements are modest, considering that low unemployment is partly due to a fall in the employment participation rate, and that real median earnings have been essentially flat since the 1970s, despite persistent productivity growth.

This year’s slower growth in the United States will drop below Eurozone growth for the first time in seven years, while in Japan growth continues to stagnate. In the United Kingdom of Great Britain and Northern Ireland, revived growth will be cut short by its decision to leave the European Union, or “Brexit”, though it is still difficult to predict just how big the impact will be, and what – if any – will be the wider contagion effects.

The loss of economic momentum in the advanced economies is having knock-on effects on developing countries, which will grow on average less than 4 per cent this year, some 2.5 percentage points below the pre-crisis figure. Considerable regional variations mean that while Latin America is in recession, Asia continues with slower but steadier growth.

Slower growth in developing economies compounds concerns for the global economy (see table). In 2016, global growth will likely drop below the 2.5 per cent figure registered in 2014 and 2015, and UNCTAD economists would not be surprised if it dropped further.

Global trade has slowed even more dramatically following a brief bounce from the depths of the global financial crisis, dropping to just 1.5 per cent this year, a full percentage point lower than world output; the Geneva-based body maintains that the lack of global demand and stagnant real wages are the main problems behind the slowdown in international trade. But if policymakers fail to mitigate the negative impacts of unchecked global market forces, then a turn to protectionism could trigger a vicious downward cycle affecting everyone.

As stated in previous editions of the Trade and Development Report, it is debatable to assume that the current generation of mega-trade agreements would solve the trade slowdown. There is little evidence to confirm the expected positive impacts of these agreements, and overall it is necessary to consider the downside risks of footloose capital, the discretionary market power of large corporations and the assumption that markets can expand as wages stagnate.

Regulate finance: Money for nothing, but investment still stuck in low gear
“Enthusiasts for efficient markets once promised that financial deregulation would boost productive investment, but this promise has not been met,” said Richard Kozul-Wright, Head of the UNCTAD Division on Globalization and Development Strategies, and lead author of the report.

“Instead, rising profits coincide with increased dividends, stock buybacks, and mergers and acquisitions, but not with new plant and equipment or even research and skill acquisition,” he said.

Corporations are not reinvesting their profits into production capacity, jobs, or self-sustaining growth. Indeed, even as profit shares have risen (see figure), private sector investment is over 3 percentage points lower than what it was 35 years ago, the report finds.

In developed economies, corporate profitability has been driven increasingly by the financialization of corporate strategies, linked to the rise of so-called shareholder primacy and a focus on short-term decision-making, cost management and financial engineering under the watchful eyes of institutional investors. While the pace has varied across countries, corporate refocusing through managerial practices, such as increased dividend distribution, stock buybacks, mergers and acquisitions, has meant that conventional retain-and-invest strategies have been gradually replaced by the dictum to downsize and distribute. The report concurs with the Council of Economic Advisers on the likely relationship between these trends and the visible increase in market concentration in recent decades. On some counts, the phenomenon of profits without producing has given rise to a post-financial crisis world of profits without prosperity.

Repercussions at the macroeconomic level have been felt clearly in developed economies in the form of rising income inequalities, due in part to executive remuneration schemes. Other impacts are progressive tax erosion and, ultimately, weakening aggregate demand, jobless growth, financial bubbles and further rises in income disparity, deepening concerns that without a change in policy direction, secular stagnation will be here to stay.

The report states that a reliance on monetary policy and cheap credit to stimulate recovery has only reinforced this pattern.

Reigning in corporate financialization in developed countries and developing countries alike will require changes in corporate governance and in the incentive structures of non-financial corporations, for example by strengthening regulatory links between corporate taxation and profit reinvestment for productive purposes.

Developing countries should build domestic demand, use regulation to protect themselves from the risks of financialization in their domestic contexts and protect their policy and fiscal space to manage any unforeseen shocks, the report finds.

Many of these measures will require better policy coordination at the international level, particularly among systemically important economies in the Group of 20.

Industrial policy revived
The more challenging global environment means that developing countries cannot count on a swift return to the rapid growth enjoyed in the first years of the new millennium. Solutions will require ambitious yet pragmatic responses, including a shift of resources towards more diversified and higher value added activities.

Industrial policy has always involved the selection and support of key sectors, but this year’s Trade and Development Report advocates a more sophisticated approach, including the construction of linkages and capabilities to build a production base fit for purpose in a rapidly changing world where sufficient space is available for experimenting and learning, both in the public and private sectors.

The role and effectiveness of industrial policy is not only a concern in developing economies. While the share of industrial activity in the gross domestic product of developed economies has been declining for some decades as part of their evolution towards a post-industrial society, the pace and extent of this shift, which accelerated in the early 2000s, has begun to worry policymakers in several developed economies. Such worries, and attendant concerns about the hollowing out of the middle class in these economies, have intensified since the 2008 global financial crisis, reinforcing the argument that policymakers should now use industrial policies as part of a rebalancing of the economy away from the lopsided importance of the financial sector. It is an argument supported by the slow recovery of these economies since the Great Recession.

The report calls for policymakers to be more pragmatic, learning from both successes and failures.

Capable and stable government institutions, along with adequate public resources, matter. But dialogue between government and business is also essential for the exchange of information and building trust. Importantly, the state should also be willing and able to withdraw or withhold financial support in case of underperformance by business.

The report calls for a less ideological discussion of targeting support, while also recognizing that standalone industrial policies are unlikely to deliver. Instead, the key to success lies in the effective integration of macroeconomic, financial, trade and industrial policies. 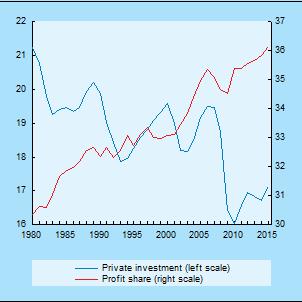