The world's poorest countries need more support to tackle "vastly unequal" impacts of climate change. Other countries must do more in line with the principle of common but differentiated responsibilities. 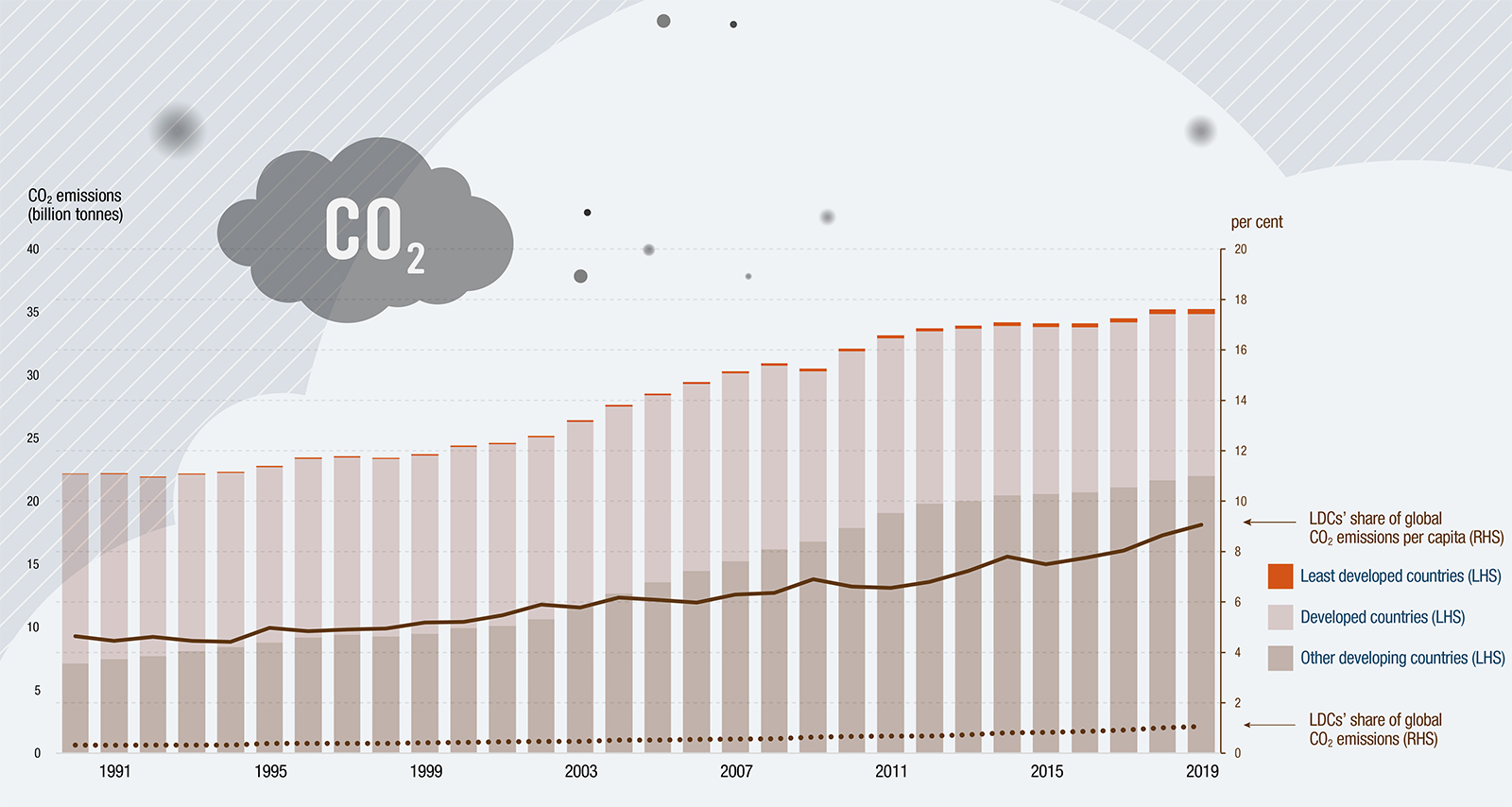 Date: 1 October 2021
Source: UNCTAD calculations based on the Global Carbon Project.
Note: Territorial-based emissions (or production-side emissions) are CO2 emissions (from the use of coal, oil and gas (combustion and industrial processes), the process of gas flaring and the manufacture of cement) attributed to the country in which they physically occur.

The dual challenge of recovering from the fallout from the COVID-19 pandemic and addressing the escalating climate emergency has rightly been at the core of ongoing multilateral and national efforts to ensure a more inclusive and greener recovery.

The above chart shows the minimal extent to which the 46 least developed countries (LDCs) – home to about 1.1 billion people, or just 14% of the world population – have contributed to CO2 emissions.

Despite recent increases, in 2019, LDCs were estimated to account for about 1.1% of total world CO2 emissions from fossil-fuel combustion and industrial processes – the main sources of greenhouse gas emissions globally.

On front lines of climate crisis

Nonetheless, LDCs, which bear the least historical responsibility for climate change, are on the front lines of the climate crisis, as epitomized by the fact that over the last 50 years, 69% of worldwide deaths caused by climate-related disasters occurred in LDCs.

This situation is worsening existing inequalities and creating what the UN Special Rapporteur on extreme poverty and human rights, Philip Alston, called a “climate apartheid”.

The 26th UN climate conference (COP26) presents a unique opportunity to redress this situation and accelerate action towards the goals of the Paris Agreement.

Yet with less than a month to go, LDCs, which disproportionately bear the burden of climate-related impacts, are facing financial and logistical barriers (compounded by unequal vaccine access and travel restrictions) to their participation in the conference, threatening the inclusivity of negotiations at COP26.

LDCs have set themselves ambitious emission-reduction targets in their nationally determined contributions. But preventing global temperature from rising more than 1.5 degrees Celsius from pre-industrial levels hinges on more systemically relevant countries taking appropriate actions and doing the same, if not proportionally, more, in line with the principle of common but differentiated responsibilities.

Moreover, adaptation to climate change is a pressing issue for LDCs, as they continue to face severe challenges in accessing climate finance (notably for adaptation and climate-resilience measures, which still constitute a very small share of total climate finance).

Also critical is setting in motion an effective knowledge and technology transfer mechanism to facilitate LDCs’ transition to the green economy. This includes implementing a sustainable and modern energy agenda and undertaking pre-emptive adaptation interventions in relation to agriculture, water and coastal protection such as introducing drought-resistant crops, early warning systems and making use of blue-green infrastructures.

Addressing the above priorities, taking into account the needs of the most vulnerable populations and groups suffering from discrimination, is imperative to ensuring prosperity for all.