The rapid spread of Covid-19 has upended life in all parts of the world in ways never witnessed this past century.

On the health side we have seen an acute shortage of facilities from testing kits, personal protection gear, to hospital facilities and health personnel in the most developed countries.

On the economic frontier we have seen the virtual collapse of air travel and the attendant hospitality industry. The crushing equity markets across the world are heralding a global recession, with a precipitous decline in global foreign direct investment and flight of capital from developing nations as portfolio managers retreat to more secured markets.

African nations are forced to address the immediate health and livelihood challenges. They must ride out the emergency and prepare for uncertain times as we confront a fundamentally changed economic landscape.

Africa is in the path of a fast-approaching storm with indications pointing to the pandemic hanging over the continent in slow devastation not dissimilar to the way Hurricane Dorian ravaged Abaco Island in the Bahamas last year. 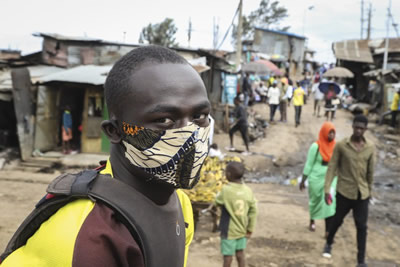 A motorcycle taxi driver wears a makeshift mask made from a local fabric known as Kitenge as he looks for customers in the Kibera neighbourhood of Nairobi, Kenya (AP Photo/Patrick Ngugi)
Related link:

At the eye of this storm is a stark challenge: How do we undertake a basket of measures deemed necessary to flatten the curve of infection and death while limiting the hit on economic life? How do we embrace policy actions to save lives, if they appear likely to shatter livelihoods?

The standard practice is to give priority to life. This is what developed countries are doing. But complete shutdowns have been possible in those countries because personal savings, unemployment benefits, ambitious stimuli packages, public kitchens and helicopter money to vulnerable people and enterprises have been unleashed at phenomenal speed.

For people living off daily earnings, operating on the margins of poverty without savings and no access to public subsidy, an extended disruption of economic life threatens death by starvation or by associated poor people’s ailments.

Experience around the world has shown that people with pre-existing health conditions are most at risk from the virus.

We have also seen from the plight of African Americans, poverty is a pre-existing condition for suffering the worst of the coronavirus disease.

As we ramp up health emergency response, the shame of our unpreparedness comes into sharp view.

With four ICU beds, two of which are currently out of commission, South Sudan has the unenviable statistic of having more vice presidents than ICU beds.

The continent immediately needs a health Marshall plan funded by the combined resources of public balance sheets and comprehensive donor support. While the World Health Organisation and the World Bank have made some contributions, a much larger fund is urgently needed to stem this beastly pandemic.

On the economic front, things could hardly be worse. United Nations Conference on Trade and Development studies show a -40 per cent markdown on FDI over the next year. Mergers and acquisitions are on course for a -50 per cent and -70 per cent decline globally in the months of March and April respectively.

The top 5,000 multi-national enterprises in the world are revising down earnings estimates between -30 per cent and up to -200 per cent for this year.

Loss of export earnings both through disruption of supply chains and lockdowns is projected to cost Africa upwards of $500 billion.

This is compounded by the collapse in petroleum prices. Petroleum accounts for about 27 per cent of Africa’s total export earnings ($131 billion in 2018).

For a continent that imports 90 per cent of its medicines and medical equipment, any disruptions of cargo movement directly impacts emergency procurement of health resources.

Africa is a net importer of food. As major cereal exporters take a hit, there is concern that some might ban exports as happened in the last recession.

As we head into the week of the annual meetings of the World Bank and the IMF, a clear evaluation of the immense task at hand is important to inform how urgently African finance ministers combine forces to place their emergency on the front banner of the meetings.

They should fight for enhanced special drawing rights at the IMF and a moratorium on public debt service to raise resources for confronting the pandemic.

It is only through this support that Africa can enforce measures to keep its people out of harm’s way, while mobilising minimal subsidies to help put food on the table and slow the atrophy of its enterprises.

Read the original article on The EastAfrican