Sustainable management of the commodity sector can fuel global economic growth. Nine more developing economies became dependent on commodity exports between 2010 and 2015, bringing the total to 91, about two-thirds of all developing countries, a new UN report says. 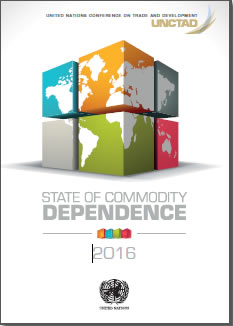 "The State of Commodity Dependence 2016", highlights that between 2010-2015 developing countries saw their revenue from commodity exports jump 25% to US$ 2.55 trillion.

Commodity dependence can negatively affect human development indicators like life expectancy, education, and per capita income, and about two thirds of commodity-dependent developing countries recorded a low or medium human development index in 2014-2015, according to the report, The State of Commodity Dependence 2016.

"In the context of dramatic volatility in commodity prices, developing countries will struggle to achieve the Sustainable Development Goals unless they break the chains of commodity dependence," UNCTAD Secretary-General Mukhisa Kituyi said in Geneva ahead of the report's release.

"Many developing countries have been commodity-dependent for the past three decades, and it is worrying to see that the numbers are going up," Dr. Kituyi said.

Nearly 400 million people will need to be lifted out of poverty by 2030 if the Sustainable Development Goals are to be achieved in commodity-dependent developing countries.

The rise in commodity dependence was most noticeable in Africa, where seven new countries entered the category in 2014-2015, bringing the total to 46. Over the same period, the number remained stable at 28 in Latin America and the Caribbean, while the region of Asia and Oceania saw its total increase by two to 17.

Regarding the type of exports, dependence was predominantly on agricultural goods. This was the case for 41% of the countries, while 30% depended on fuel exports and 23% on minerals, ores and metals.

More than half of the countries depending on agricultural commodity exports were African, while the region of Asia and Oceania was home to two thirds of those relying on minerals, ores and metals, and almost half of those dependent on the export of fuels.

UNCTAD presented the report at the ninth session of the multi-year expert meeting on commodities and development, convening in Geneva on 12 and 13 October 2017.