Established just five years ago, Botswana's competition authority has helped reinject millions of dollars into local businesses and save thousands of jobs in an economy where unemployment persists at around 20%.

In sectors such as health, retail, tourism, and agriculture, it has investigated alleged cartels and bid rigging, and assessed hundreds of mergers and acquisitions. In doing so, it has helped the country to prepare for a post-diamond economy and to remain one of Africa's least corrupt and most prosperous.

"For such a young competition authority, these are very big achievements," says Elizabeth Gachuiri, who, as an UNCTAD economist working on competition and consumer protection, helped establish the authority.

"Most competition authorities in developing countries have not investigated cartels or done dawn raids like they have in Botswana," she adds, ahead of a meeting in Geneva on competition policy.

Cartels and abuses of market power can push prices higher and quality lower, seriously affecting development goals in countries such as Botwsana, where one in five inhabitants still lives in poverty. Recent research by a member of UNCTAD's Research Partnership Platform found that cartels decrease production by an average 15% and overcharge by 20%.

Concerns about competition in Botswana's economy surfaced about two decades ago when high levels of market concentration threatened to undermine the country's wider economic reforms.

"UNCTAD has worked with Botswana from the beginning, from the economic mapping to the drafting of lay laws, right up to the recruitment of the authority's first CEO," Ms. Gachuiri says.

Since then, Botswana has become more competitive and less reliant on diamonds. Mining's contribution to GDP is now less than half what it was just a decade ago. And the country's ranking in the World Economic Forum's annual index of competitiveness is now 65, up from 80 in 2011-2012. 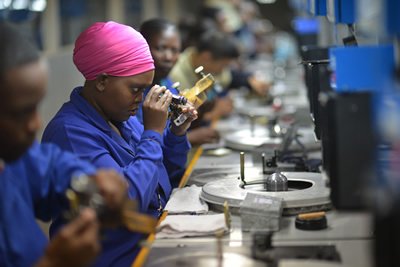 The next step, she says, would be a volunteer peer review so the country can benchmark its competition laws and policies against international best practices.

"This is something the Botswanan authorities have expressed interest in doing, and we look forward to discussing this further with them," she says.

IGE competition experts meet this year in Geneva from 19 to 21 October.