The West African nation hopes to attract more tourists from the continent and has enlisted UNCTAD and the UN Economic Commission for Africa in the endeavour.

Blessed with sweeping stretches of sand and an enchanting river ecosystem that some 560 bird species call home, The Gambia is a bourgeoning tourist destination on Africa’s west coast.

Tourism accounts for more than 20% of GDP and is a growing source of employment for a nation with some of the world’s highest emigration rates.

But most of the 162,000 tourists who visited mainland Africa’s smallest country in 2017 were Europeans who booked trips with tour operators, meaning much of the money didn’t end up in the pockets of Gambians.

The government hopes to change this by attracting more African tourists and has enlisted UNCTAD and the UN Economic Commission for Africa (UNECA) to help kickstart the initiative. 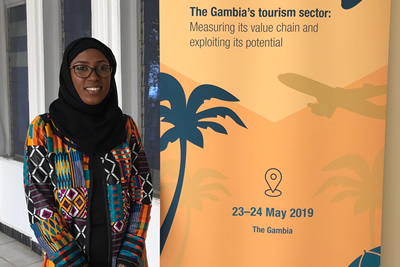 “Attracting more regional tourists is important because they buy more local products and services than non-African visitors,” UNCTAD economist Claudia Roethlisberger said, adding that this was highlighted in a report  by her organization.

African tourists are also a less seasonal and volatile source of revenue. For example, during the 2014-2016 Ebola outbreak that ravaged Guinea, Liberia and Sierra Leone, many tourists from outside Africa cancelled trips to The Gambia while Nigerians continued to visit.

Globally, 80% of tourists travel within their region – Europeans head to Paris or the French Rivera, for example, while North Americans prefer the lights of New York City or the allures of the Californian coast.

But for Africa the regional travel share is just 40%. This is expected to increase thanks to strong economic growth on the continent and an expanding middle class, and The Gambia hopes to catch the new African tourist’s eye.

To design the necessary policies, the government needs better data, and that’s the purpose of the UNCTAD-UNECA seminar with the country’s ministry of tourism and culture in Bijilo from 23 to 24 May.

Titled The Gambia’s tourism sector: measuring its value chain and exploiting its potential, the seminar will help the ministry better assess the value added by domestic and foreign operators, and to determine how well the nation is embedded in regional tourism value chains.

Getting data on who benefits

“We need to measure the tourism value chain to design evidence-based policies which will allow tapping the potential of this strategic sector in The Gambia,” said Hamat N.K. Bah, the country’s tourism and culture minister.

“There is still a misconception of what the sector contributes to the economy,” Mr. Bah said.

“We need data that show who benefits and how benefits are spread,” added the ministry’s permanent secretary, Cordu L. Jabang-Senghore.

According Aissata De, the UN Development Programme’s resident representative in the country, the data will also help during negotiations on liberalizing services under the African Continental Free Trade Area, which technically enters into force on 30 May.

“The UNCTAD seminar is an example of how we can join efforts and support The Gambian people,” Ms. De said.

The seminar is part of the UNCTAD-UNECA project Services trade in Africa: promoting integration into regional value chains, funded by the UN Development Account.

In addition to The Gambia, the project is working with Ethiopia, Kenya, Mali, Nigeria and Togo to enhance the capacities of their governments to measure the contribution of services such as tourism to regional value chains.