Illicit trade endangers the environment, the law and the SDGs. We need a global response

A dark side to globalization has been the alarming emergence of illicit trade, which stands in direct contrast to the UN’s Sustainable Development Goals (SDGs). From smuggling, counterfeiting and tax evasion, to the trafficking of humans and wildlife, illicit trade holds back progress, increases costs and pushes the goals further away.

While data on this clandestine activity has previously been scarce, there is mounting evidence of the economic, social and environmental losses it can cause. Taken together, economic leakages from illicit trade create an annual drain on the global economy of $2.2 trillion – nearly 3% of the world’s economy. If illicit trade were a country, its economy would be larger than Brazil, Italy and Canada – and as large as Mexico and Indonesia combined. 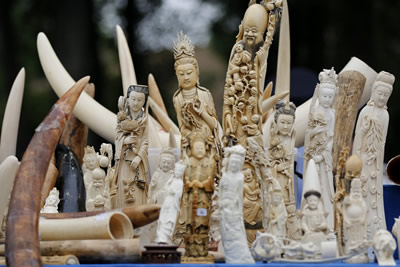 Illicit trade significantly endangers all aspects of the SDGs

It creates a triple threat to the financing of development by crowding out legitimate economic activity, depriving governments of revenues for investment in vital public services and increasing the costs of achieving the SDGs by eroding the progress already made. One of the biggest oil producers in the world loses as much as 30% of its refined petroleum products through theft, diversion and smuggling into neighbouring states. To compound the problem, its government loses associated tax revenues and spends billions on curbing this illicit trade in petroleum.

The trade in counterfeit goods endangers consumers and diminishes public health. According to the World Health Organization, substandard and fake antimalarial medicines alone cause more than 100,000 deaths per year in Sub-Saharan Africa. Pneumonia that goes untreated owing to fake, substandard or otherwise ineffective illicit medicines may take the lives of 150,000 children worldwide every year – roughly equivalent to the total number of deaths in airplane crashes from the 1920s until today, but garnering far fewer headlines.

For instance, illegal logging, with an estimated annual value of up to $157 billion, is the world’s most profitable crime involving natural resources. It can account for more than half of all forestry activities in important tropical forests, such as the Amazon Basin, Central Africa and Southeast Asia, making it a primary malefactor in the fight against climate change.

Illicit trade is a serious threat to the rule of law

Links between illicit trade and organized crime are well established, from human trafficking networks and tobacco smuggling, to fuel theft by drug cartels and the involvement of the mafia and organized criminal groups in the trade of counterfeit goods.

These malignancies weaken law enforcement and destabilize communities and economies. Perhaps most frightening are the links to terrorist financing that heighten threats to national and global security.

Indeed, illicit trade is not a problem confined to developing countries. Every country suffers from this menace, all that varies is the magnitude of the problem.

The blight of illicit trade is widely acknowledged by global governance bodies. Currently, no fewer than 20 intergovernmental organizations tackle this issue, largely by sector or subject.

Our concerns about illicit trade are common, but our efforts are scattered

While each form of illicit trade has its own characteristics and drivers, we often see the same criminal groups using the same routes, the same means of transport and the same concealment methods behind multiple forms of illicit trade.

A segmented approach to tackling illicit trade also precludes our ability to consider the interconnected nature of the problem and to appreciate commonalities and points of convergence across sectors.

The result is a disjointed international response, with little cross-cutting work done either in the form of shared resources or shared recommendations addressed to national governments. This undermines a more effective governmental response to the problem.

As well as governments and international organizations, the private sector needs to play a pivotal role too. Not only is the private sector severely affected by illicit trade, but it is part of the solution through the technologies it develops and the measures it can take to protect and secure supply chains.

The need for a new, cross-sector approach to address illicit trade is evident. It is vital to link existing initiatives. A global forum is needed to act as a connecting hub, to explore multidisciplinary dimensions.

We recognize the problem and we must act. Our dialogue on illicit trade is an attempt to start the conversations that will move us towards the creation of a common front.

We must globally address the commonality of illicit trade mechanisms to defend the mission to achieve the SDGs. Only then can we safeguard people and their livelihoods from this worldwide scourge.

Read the original article on the World Economic Forum

The views expressed in this article are those of the authors and do not necessarily reflect the views of UNCTAD.