Sarah Jordan of the United Nations new Special magazine asks Dona what motivated her to serve as UNCTAD's special adviser for the blue economy and if she thinks it's possible to sustainably use our ocean's resources. 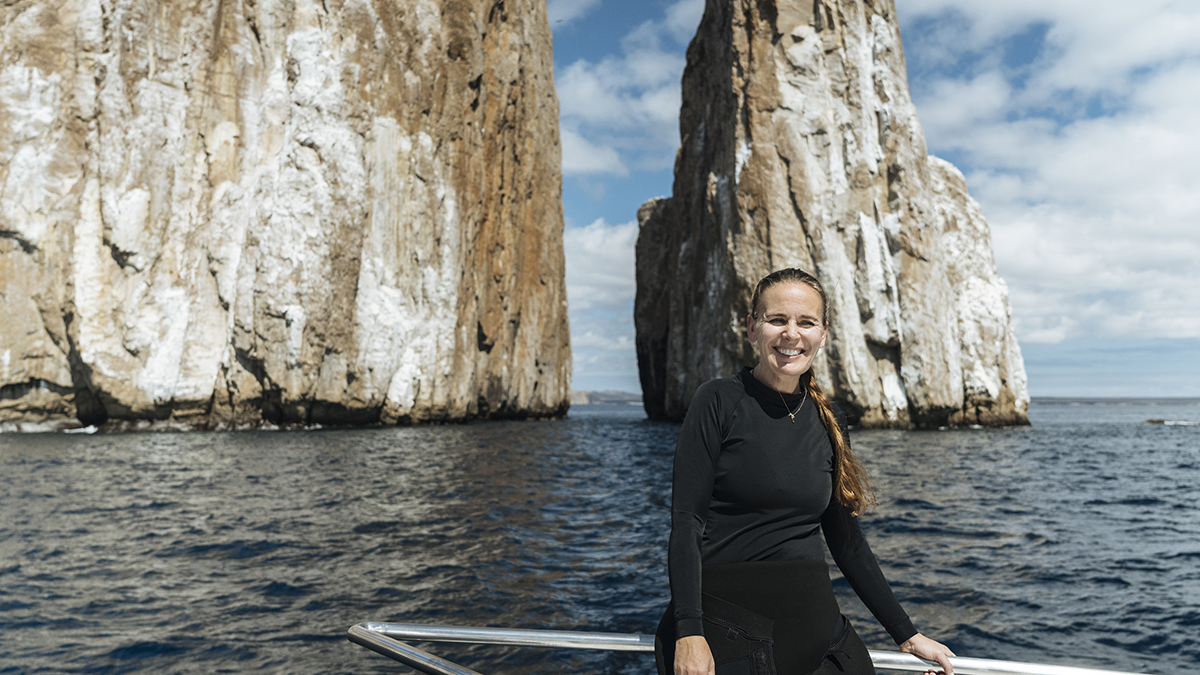 What motivated you to serve as UNCTAD Special Adviser for the Blue Economy?

My love of the ocean, which has inspired my work in ocean conservation for more than a decade.

My parents instilled in me the wish to drive meaningful change. I learned from my father about the importance of science and data to inform policy, to ensure accurate information is widely available, and how vital it is to collaborate with all stakeholders. My mother taught me empathy and to care for people in providing meaningful and decent livelihoods.

This is reflected in my work at the Bertarelli Foundation, where I focus on advancing marine conservation policy, and the designation of marine protected areas (MPAs), to stop and reverse biodiversity loss. We follow the science. We commission and provide research on topics such as analyses of economic outcomes, or the long-term impact of illegal fishing, overfishing and extraction activities on biodiversity and sustainable livelihoods, which underpin policy decisions.

We have partnered with Pew Charitable Trusts for several years, and together, we have achieved protection of over 8 million square kilometres of ocean. We are grateful to have the support of eminent Ocean Ambassadors, co-chaired until last year by John Kerry, who are committed to advancing ocean protection: David Cameron, James Alix Michel, Heraldo Muñoz, Carlotta Leon Guerrero and Diva Amon.

It’s only possible to achieve high levels of protection and sustainable use of the ocean by working closely with and engaging with governments, scientists, and, of course, indigenous peoples and the local community, whose leaders at project sites taught me that their traditional methods of fishing and managing fish stocks are key to informing nature-based solutions.

I am inspired to contribute in some way to finding solutions to the world’s challenges – as described so well by the United Nations Sustainable Development Goals. So when I was invited to serve as UNCTAD Special Adviser for the Blue Economy, I saw this role as an opportunity to advocate for a sustainable blue economy, and for small island developing states (SIDS).

SDG 14, Life Below Water, is one of the most important SDGs, on the one hand for the blue economy, but also because if we manage to achieve SDG 14, many other SDGs will also see progress, on poverty, hunger, education, gender equality, health, and climate change.

SIDS are in fact, great ocean states. They have exclusive access to a sea area more than 20 times their collective land area. Their small size and remote location make them very dependent on trade and tourism, and highly vulnerable to climate change and natural disasters. The pandemic’s impact on tourism has made it even more urgent to diversify their economies.

A sustainable blue economy can give SIDS a path to economic growth, social inclusion, and improvement of livelihoods. While SIDS often lack the capacity, skills and financial support to better develop their blue economy, investments can and must help bridge the gaps in knowledge, best practices, innovation, capacity and finance, so that SIDS can grow sustainable ocean economies.

Is it possible to use ocean resources for economic growth and improved livelihoods and jobs and at the same time preserve the health of ocean ecosystems?

Yes, we can and we must combine production with protection. If we are to achieve a sustainable, regenerative and equitable blue economy, and derive value from the ocean, we must also protect the health of the ocean and enable a sustainable use for generations to come.

We have often considered the value of ocean resources purely in terms of harvesting and extraction. But a paradigm shift is necessary.

We need to provide an economic value for conserving marine life, in terms of all the ‘free services’ provided – climate regulation, the oxygen the ocean produces, the live coral reefs which are nurseries for many species of fish and support tourism, the mangrove forests and seagrass meadows which protect against extreme weather, and its role as a carbon sink.

So if we follow the data, it’s clear that we need to integrate the economic value and benefits of more ocean conservation in policies and planning. Diversifying from the traditional ocean sectors towards economic areas that will have a lower impact on marine ecosystems, while still creating jobs, will be key if we are to achieve a truly sustainable blue economy.

You have three children and are committed to protecting the natural world for future generations. Could you describe the programmes you have developed to raise awareness about nature and the ocean?

Education and awareness are key for the future conservation of natural habitats on land or in the water. We need to engage on conservation topics with children and, in fact, a far wider public, whenever and wherever possible, to take nature conservation mainstream.

In 2015, I launched Spindrift for Schools while sailing around the world for the Jules Verne Trophy, to share my passion for the environment with children aged 8 to 15. I am convinced that by learning about nature, by understanding natural eco[1]systems and phenomena, young people can become actors of change and will want to preserve nature in their turn.

In April this year, with my husband and my children, we founded Sails of Change because we wanted to shine a light on the importance of ensuring a balance between nature and people. We aim to amplify the ideas, actions and solutions from around the world, that can help bring about change. We are providing a communication platform to share ambitions and targets, such as the goal of protecting 30% of our planet by 2030, and raise awareness with a wider public.

The ocean is becoming more “mainstream”. People are becoming more aware of the damage we are doing to the oceans. Do you think films like “Seaspiracy” about the environmental impact of fishing, or films that receive artistic acclaim like “My Octopus Teacher” (Oscar and BAFTA for best documentary in 2021) are helpful in raising awareness about the ocean?

Ultimately, and regardless of any controversy around how information is presented, yes, we do need documentaries, films and series that raise awareness about the damage we are causing.

David Attenborough, one of the most trusted voices in conservation, and Jacques Cousteau, who brought the underwater world to the small screen, really led the way in sharing the wonders of nature with the public. I also appreciate the Outlaw Ocean project by Ian Urbina, a New York Times investigative reporter, for the eye-opening stories he has shared, including about human rights abuses and slavery on the high seas.

All of this content helps to raise awareness of our impact on the ocean, including the impact of industrial fishing. Industrial fishing is dominated by wealthy nations who have the capacity to operate distant water fishing fleets and to subsidise their fleets, whereas lower-income countries often enter into foreign fishing agreements, which may be inequitable or unsustainable, and can result in their waters becoming overfished.

We need to end harmful fisheries subsidies, which have caused overfishing and resulted in biodiversity loss on an unprecedented scale, and instead support sustainable fishing levels and protect the livelihoods of individual artisanal or traditional fishers.

At newSpecial for this June issue we have asked all our interviewees the following question: “You have been appointed President of the Earth for six months, you have full powers. What three steps do you take and why?”

Now that is a wonderful proposition, I would like to be able to take all three steps and then some more!

My first step would be to immediately enforce fully or strongly protection for 30% of the planet, and ensure the remaining 70% is sustainably managed. Given that the ocean covers two thirds of our planet, I hope we could protect more than half of the ocean, in strict no-take zones.

Then, as a logical second step, I would ensure governments, NGOs, scientists and the private sector collaborated to create free platforms to share data on land and ocean conditions and usage. Not only would this help in planning, management and enforcement of protected areas, but this would be essential in monitoring whether protection of 30% of the planet, alongside other measures such as increasing our use of renewable energy, is sufficient to combat climate change. In fact, I’ve already made a step in this direction with the creation of Global Fishing Watch Marine Manager, a portal that aims to make diverse ocean datasets accessible and translated into actionable information for decision-making, improved management of large areas of the ocean, and to inform policy.

Finally, and most importantly, ensure access to education, including environmental topics, for every single child. If humanity is to live in harmony with nature on this blue and green planet that we call home, we must start with education. 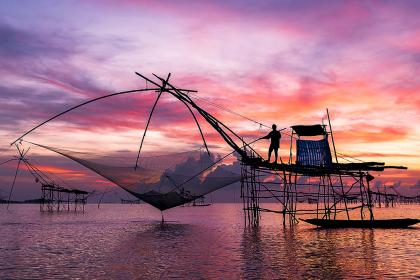 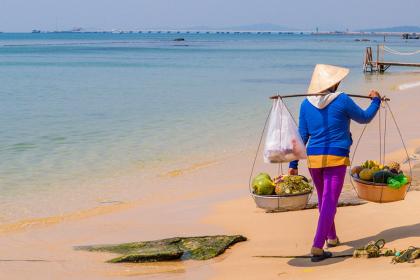 Developing a vibrant blue economy is feasible, but we need to collaborate