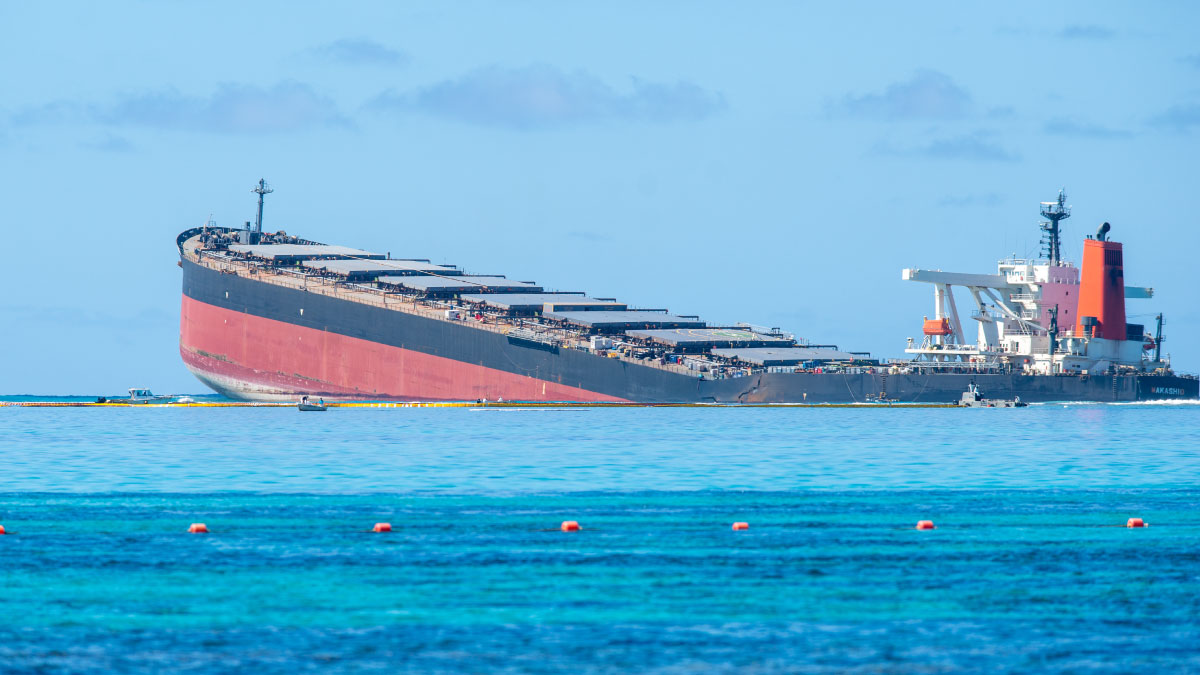 The “MV Wakashio”, a Panamanian-flagged vessel, wrecked off the coast of Mauritius

The ongoing oil pollution incident from the grounded 203,000 DWT bulk carrier “MV Wakashio” is threatening an ecological catastrophe around the Indian Ocean island of Mauritius, endangering corals, fish and other marine life already under threat from climate change (IPCC 2018).

In addition, it risks bringing devastating consequences for the economy, food security, health and tourism industry. Tourism in Mauritius - a popular destination for its pristine beaches - reportedly contributed about $1.6 billion to its economy during the last year, and was already suffering from the negative effects of COVID-19.

The “MV Wakashio”, a Panamanian-flagged vessel, was sailing under ballast, without cargo, through a major shipping lane in the Indian Ocean, when it went off course and grounded on a coral reef, in an environmentally sensitive area off the east coast of Mauritius, while travelling from China to Brazil, on 25 July 2020. The cause of the grounding is still unknown. At the time of the grounding, the ship was reported to have contained approximately 3,894 tons of fuel oil, 207 tons of diesel, and 90 tons of lubricant oil on board. Due to bad weather, the first signs of cracks in the hull were reported on 5 August and, shortly thereafter oil began to leak.

The location of the grounding is close to a marine park, two internationally protectedwetland sitesof international importance (under the Ramsar Convention on Wetlands 1971, as amended in 1987) including asmall coral atollhosting endemic species of Mauritius’ rich and rare biodiversity and a popular tourist destination. It is also the location of afamous naval battle, containing historic wrecks that have laid undisturbed for two centuries.

The Government of Mauritius activated its national oil spill contingency plan and, on 7 August, declared a state of environmental emergency and called for international help. Specialist teams and equipment were sent from a number of countries, including France and Japan, as well as from international bodies, to help Mauritius deal with the spill. Alongside IMO and OCHA, the United Nations Development Program (UNDP) Mauritius and the International Tanker Owners Pollution Federation (ITOPF) are also mobilising environmental and oil spill experts. The Japanese owners and managers of the bulk carrier (Nagashiki Shipping), and its P&I Club, contracted specialist oil response and salvage teams to help mitigate the effects of pollution; the vessel’s time-charterers (Tokyo-Mitsui O.S.K. Lines, Ltd.) also pledged to cooperate and provide support.

According to ITOPF, as of 11 August, approximately 800-900 tonnes of fuel oil had leaked from a breached tank and drifted into the lagoon surrounding Pointe d’Esny; oil has also come ashore at various locations around the Baie de Grand Port, including areas of mangrove. Other estimates indicate between 1,000 and 2,000 tons of fuel oil might have leaked from the ship into the environmentally sensitive waters. Some efforts to control oil leaking from the ship appear to have been successful to a certain extent, while others continue along the coastline to contain the spread of the oil and control the potential environmental disaster. However, the situation remains precarious, with the spill already considered as the worst in the history of Mauritius. Worth mentioning is that satellites, using their data analytics platform, have been able to trace the movement of the “MV Wakashio” over the critical last few days prior to impact and satellite data may also be able to assist in efforts to contain the pollution.

It still remains to be determined how and why this incident happened, and what lessons can be drawn to prevent a similar casualties from occurring elsewhere. However, the incident in Mauritius highlights the role of international legal instruments in the field and the importance of encouraging all States to adopt the latest of these. Liability and compensation will be critical in the aftermath of the spill and in respect of the economic consequences, as well as in respect of the costs of reinstatement of the environment. Oil spills (and resultant clean-up operations) can seriously affect the marine environment, both as a result of physical smothering and toxic effects. They are also associated with potentially high costs and wide-ranging economic implications.

Unfortunately, the very comprehensive international regime on liability and compensation for oil pollution damage caused by persistent oil spills from tankers (IOPC-FUND regime), which is the main focus of an earlier UNCTAD report, does not apply in this case, as the bunker oil spill is from a bulk-carrier, not an oil tanker. Mauritius is a State Party to the IOPC FUND regime (International Convention on Civil Liability for Oil Pollution Damage (CLC) and the International Convention on the Establishment of an International Fund for Compensation for Oil Pollution Damage (FUND), as amended in 1996) - which would have provided liability and compensation of up to 203 million SDR (approx. 286 million USD) for this incident (also covers reinstatement of the environment). The 2003 Supplementary Fund Protocol provides even higher liability and compensation, up to a maximum of 750 million SDR (around 1.05 billion USD) per incident, but has not been ratified by Mauritius.

Bunker oil spills from ships other than oil tankers, as in the present case, are covered by the International Convention on Civil Liability for Bunker Oil Pollution Damage, 2001 (Bunkers Convention), which Mauritius, Panama, and Japan have ratified. The Convention was adopted to ensure that adequate, prompt, and effective compensation is available to persons who suffer damage caused by spills of oil, when carried as fuel in ships' bunkers.

Modelled after the CLC, the Bunkers Convention contains many similar provisions. In particular, the Convention imposes strict but limited liability for pollution damage on the shipowner, coupled with compulsory insurance (Art. 7.1) and a claimant’s right of direct action against the insurer (Art. 7.10). Exceptions to liability include cases where “the damage was wholly caused by the negligence or other wrongful act of any Government or other authority responsible for the maintenance of lights or other navigational aids in the exercise of that function” (Art. 3.3).

However, the amount of liability under the Bunkers Convention may be limited (Art. 6), in accordance with any applicable national or international regime, such as the Convention on Limitation of Liability for Maritime Claims (LLMC), 1976, as amended in 1996. This is significantly lower compared to the liability under the IOPC FUND regime for oil pollution from tankers, and depends on the size (gross tonnage) of the ship. Regarding the oil spill in Mauritius, if the gross tonnage of the vessel is, as reported 101.932 GT, then any liability for the incident under the Bunkers Convention would be capped at an overall maximum of about 46.19 million SDR (approx. 65.17 million USD).

The Bunkers Convention applies to “pollution damage” caused in the territory, including the territorial sea, and in exclusive economic zones of States Parties to it (Art. 2). "Pollution damage", as defined in the Convention (Art. 1.9), covers: (a) loss or damage caused outside the ship by contamination resulting from the escape or discharge of bunker oil from the ship, wherever such escape or discharge may occur, provided that compensation for impairment of the environment other than loss of profit from such impairment shall be limited to costs of reasonable measures of reinstatement actually undertaken or to be undertaken; and (b) the costs of preventive measures and further loss or damage caused by preventive measures. (Art. 1.9).

What this means is that (subject to an overall financial cap), economic losses are covered, as well as loss of profit from impairment of the environment. Compensation for other environmental damage, however, is restricted to the costs of reasonable measures of reinstatement actually undertaken or to be undertaken; as well as the costs of preventive measures and further loss or damage caused by such measures. As regards the costs of environmental damage by oil spills, and in particular costs of restoration or reinstatement measures, technical guidance about the preparation and submission of claims has been prepared by ITOPF. Relevant guidance by the IOPC Fund may also be of assistance in this regard. Whether the compensation available under the Bunkers Convention would be adequate to cover the costs and losses as well as the environmental damage in Mauritius remains to be seen.

The main aim of the relevant international legal framework is to enable States prevent pollution, respond to it, and determine responsibilities in the event of an incident. Several international framework Conventions, contain relevant provisions of a general nature, related to preventing and addressing ship-source oil pollution, including accidental discharges. These include the United Nations Convention on the Law of the Sea (UNCLOS), 1982; the International Convention for the Prevention of Marine Pollution from Ships, 1973, as modified by the Protocol of 1978 (MARPOL 73/78); and the International Convention for the Safety of Life at Sea (SOLAS) 1974. Mauritius, Panama and Japan are States Parties to these Conventions.

In addition, as regards oil pollution response, the International Convention on Oil Pollution Preparedness, Response and Co-operation (OPRC), 1990, establishes measures for dealing with marine oil pollution incidents nationally and in co-operation with other countries. As regards oil pollution reporting procedures, in accordance with the Convention, masters or other persons having charge of ships flying the flag of a Party, are required to report without delay, to the nearest coastal State, any event on their ship involving a discharge or probable discharge of oil (Art. 4). The Convention envisages that all ships flying the flags of States Parties, have made oil pollution emergency plans on the basis of prescriptions in the Convention and report all incidents of oil discharge. Any Party that receives such report, or pollution information provided by other sources, is to take appropriate control action, and to pass the information to all States whose interests are likely to be affected (Art. 5). The Convention also contains provisions for collaborative initiatives, in research and development, technical operations, and response to oil pollution incidents. Both Mauritius and Japan are States Parties to this Convention, but Panama is not.

Oil carriage, but also other maritime transport (e.g. container ships, chemical carriers, general cargo ships and passenger ships/cruise vessels) poses important risks of ship-source oil pollution for coastal developing States and ‘ocean economies’ such as SIDS that rely heavily on fisheries, aquaculture and tourism; this in particular given the steady growth in ship sizes and the corresponding amount of bunker fuel oil carried by vessels of all types (see also UNCTAD, 2012). The unfolding situation in Mauritius offers an important opportunity for countries to re-evaluate whether they may need to consider acceding to the latest international legal instruments in the field. This includes legal instruments on liability and compensation for ship-source pollution – both oil pollution and other pollution, such as from hazardous and noxious substances, which may cause marine environmental damage and economic losses, as well as significant personal injury. For instance, the International Convention on Liability and Compensation for Damage in Connection with the Carriage of Hazardous and Noxious Substances by Sea, 1996, as amended by its 2010 Protocol (2010 HNS Convention), based on the model of the CLC and Fund Conventions (IOPC FUND regime), aims to help fill an important gap in the global liability and compensation framework. However, the Convention has not yet entered in force, and States might therefore wish to consider becoming a Party to it.

More generally, the international community may take the opportunity to consider further strengthening the existing legal framework, as appropriate, and provide technical assistance and capacity building to vulnerable developing nations. This also with a view to the importance of combating pollution for achievement of the 2030 Agenda on Sustainable Development, in particular Goal 14 on conserving and sustainably using the oceans, seas and marine resources for sustainable development.

More information about the work of the Transport Policy and Legislation Section : /ttl/legal 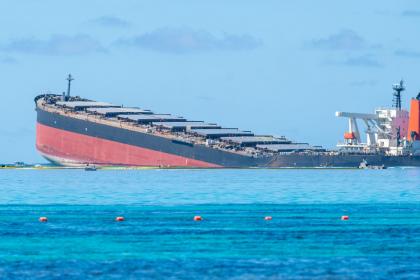