Multilateralism: the only safe route for development finance

Meeting the ambitious targets set by the 2030 Agenda for Sustainable Development – our common compass for a better world for all – means plugging a massive financing gap of at least $2.5 trillion a year for developing countries alone, according to UNCTAD estimates.

Mr. Baddoura, Lebanon’s permanent representative to the UN in Geneva and current president of UNCTAD’s governing body, said such a task is even tougher in a global landscape of weak growth, trade tensions and rising debt distress – and in a world where nations seem more set on protecting their own turf than fighting for the common good. 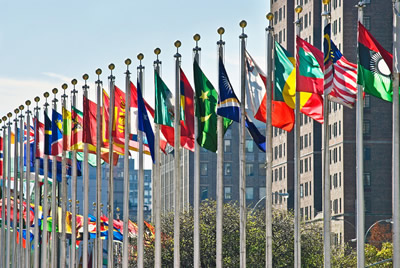 “Humanity is beset by systemic risks compounded by the erosion of multilateralism and the rise of extremist ideologies premised on forms of intolerant nationalism and exceptionalism,” he told the 2019 ECOSOC Forum on Financing for Development (FfD) follow-up, meeting from 15 to 18 April.

Unless the international community recommits to multilateralism, he said, the world won’t overcome the “chronic underfunding” of the 2030 Agenda’s 17 Sustainable Development Goals (SDGs) – the UN-endorsed blueprint for ending poverty and hunger, reducing inequalities and curtailing climate change.

Speaking at a high-level meeting held with the International Monetary Fund, the World Bank and the World Trade Organization, Mr. Baddoura cited recent examples of multilateralism at its best in UNCTAD’s work related to financing sustainable development.

For example, he pointed to UNCTAD’s intergovernmental group of experts on financing for development, whose meeting in November 2018 brought together governments, international development agencies and civil society organizations in Geneva, Switzerland, to discuss policy options for tackling the rising debt vulnerabilities of many developing countries.

Debt sustainability is one of the central concerns of the Addis Ababa Action Agenda – the 2015 plan that outlined the means of paying for the SDGs.

“If these trends continue, many countries will face unsustainable debt burdens that could jeopardize development goals as governments spend more on debt service and less on infrastructure, health, and education,” Mr. Baddoura said in a written statement to the FfD forum.

The group explored several avenues for fair and effective debt resolution mechanisms and adopted policy recommendations that were provided as an input to the forum currently underway at UN headquarters.

A toolbox for development finance

Another example is the one-stop-shop for development finance – the Toolbox on Financing for the SDGs – that UNCTAD launched in Geneva during its 2018 World Investment Forum, in collaboration with the then president of the  UN General Assembly, Miroslav Lajcák, now Slovakia’s foreign and European affairs minister.

“The toolbox is an online global resource platform for initiatives on sustainability financing,” Mr. Baddoura said in the statement.

The process brought together a range of other United Nations bodies, including the UN Development Programme and UN Environment. Others involved were the business grouping The Global Compact, the World Economic Forum, the International Chamber of Commerce, the insurance giant Aviva, and a host of other public and private sector organizations.

During this week’s FfD forum UNCTAD has also partnered with the Financing for Development Office of the Department of Economic and Social Affairs to organize the SDG Investment Fair, which provides a central platform for closing the Global Goals’ investment gap.