Myanmar encounters illicit trade valued at about US$6.4 billion every year.

But this staggering figure only reflects trade on official routes between Myanmar and its neighbouring countries.

“This is just a tip of the iceberg,” said Than Myint, the country’s minister of commerce, during the first-ever Illicit Trade Forum held 3 and 4 February at the Palais des Nations in Geneva.

The event convened by UNCTAD and the Transnational Alliance to Combat Illicit Trade (TRACIT) brought together various actors to address this alarming problem that drains more than $2 trillion from the global economy annually. 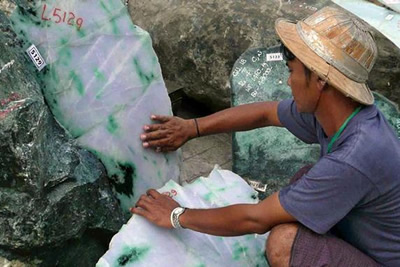 The illicit trade of jade from Myanmar has been labelled the biggest natural resources heist in modern history.

The country produces jade worth between $12 billion and $31 billion every year, but up to 80% is smuggled out, robbing the government of billions in taxes.

Other forms are illegal logging or illegal import of substandard goods, fake or unregistered medicine and dangerous goods that pose health and safety risks.

“Illicit trade threatens the existence of small and medium enterprises apart from depriving the government of revenues for public services,” Mr. Myint said.

Chipping away at progress

This multifaceted problem chips away at Myanmar’s progress as it transforms to a market economy.

The country has made great progress by liberalizing trade and investment and promoting industrial development.

However, these advances are undermined by the scale of illicit trade that permeates the economy.

The alarming magnitude of illegal trade is evidenced by “missing” $150 million trade revenues between Myanmar and neighboring Thailand.

This hole in revenues points to an underground trade in products that frustrates Myanmar’s micro, small and medium enterprises (MSMEs) as they compete with the inflow of illegal goods.

The consequences of illicit trade are far-reaching, with negative impacts on economic development and regional integration, as well as on every aspect of society.

The challenge facing Myanmar was underscored by findings from the Global Illicit Trade Environment Index, a study commissioned by TRACIT, which ranked the country 82nd out of 84 countries evaluated on their ability to inhibit illicit trade.

In response to shortcomings delineated in the TRACIT report, the Myanmar government has stepped up its efforts to combat illicit trade.

In 2019, it formed the Illegal Trade Eradication Steering Committee, led by the vice president, and empowered the Ministry of Commerce to coordinate state-level departments and establish policies, strategies, tactics, programmes and plans to control illicit trade.

These commitments are extraordinary and offer a model that any government—developing or developed—could replicate.

The results have been immediate and impressive, starting with an agreement between Myanmar and China to resume joint inspections of their common border for the first time in 24 years.

The government has also announced efforts to combat the illegal flow of goods into the country through the sea routes with the help of maritime police.

Recognizing that industry can be a critical partner in the fight against illicit trade, the government has also initiated partnerships to leverage the strengths of the private sector.

EuroCham Myanmar, the European Chamber of Commerce representation in the country, is one of the partners.

Its member companies that constitute the ‘EuroCham Myanmar Anti-Illicit Trade Initiative’ have taken a proactive stance on the issue through their annual Anti-Illicit Trade Forum, which raises awareness on illicit trade in Myanmar.

The initiative raises awareness on the volume of illicit trade across industries to both the government and the general public, whilst advocating solutions and best practices that can improve enforcement.