Q&A: Shipping and the environment

With international shipping carrying more than 80% of world trade by volume, the international community must ensure that maritime transport responds to the challenges of climate change.

The IMO decarbonization strategy represents the first global framework for shipping and follows the commitments made by countries in the 2030 Agenda for Sustainable Development and the Paris Agreement on climate change in 2015.

With the health of the planetary atmosphere and marine ecosystems at the centre of these plans, we asked UNCTAD experts Hassiba Benamara and Frida Youssef about the responsibility maritime transport has to the environment. 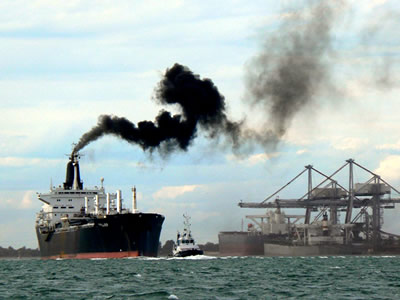 Q: What is the carbon footprint of shipping?

Q: How does shipping compare to other modes of transport?

A: Maritime transport compares favourably to other modes of transport, both in terms of fuel efficiency and GHG emissions (per unit/tonne-kilometre). However, there is significant potential for an increasing carbon footprint in view of the heavy reliance of international shipping on oil for propulsion and the expected growth in world demand for shipping services driven by expanding global population and trade.

Q: How are GHG emissions from shipping expected to evolve?

A: Without mitigating actions, carbon emissions from the sector can be expected to increase and, therefore, undermine the sustainability objective. Forecast scenarios for the medium term suggest that, under a business as usual scenario, maritime carbon emissions could increase by 50–250% by 2050, depending on economic growth and global energy demand (IMO Third GHG Study 2014).

Shipping, therefore, has a crucial role in helping to achieve the internationally agreed goal in the Paris Agreement of limiting the global average temperature increase to below 2°C above pre-industrial levels.

Q: How are the emissions from international shipping dealt with under the Kyoto Protocol?

A: Greenhouse gas emissions from international shipping – which is estimated to carry over 80% of world trade by volume and over 70% by value – are not covered under the Kyoto Protocol.

Q: Why is it difficult to regulate GHG emissions from shipping?

A: One major difficulty associated with regulating GHG emissions from international shipping relates to the inherent complexity of this sector.

GHG emissions from international shipping are mainly generated outside national boundaries and ships may be linked to different nations through registration, beneficial ownership and operation. The calculation of emissions and their attribution to countries is therefore complex.

Q: What is the international community doing to address the problem?

A: The Kyoto Protocol delegated work on limiting or reducing GHG emissions from marine bunker fuels to the IMO. In 2016, the IMO adopted a mandatory data collection system for fuel consumption by ships and a roadmap for developing a comprehensive IMO strategy on the reduction of GHG emissions from ships.

In April 2018, the IMO adopted an initial strategy on this matter, which aims at the reduction of total annual GHG emissions from ships by at least 50% by 2050, compared with 2008, and includes quantitative reduction targets through 2050, with short-term, midterm and long-term policy measures to help achieve the targets.