A solar lamp can transform a community, UN commission hears

Thanks to improvements in renewable energy technologies, poor households in rural Africa can now afford solar lamps, and some can even buy a fuel-efficient stove.

And for these families, even just one lamp can have a transformative impact, said Olasimbo Sojinrin, who works for Solar Sister, a not-for-profit social enterprise selling inexpensive clean energy products.

Ms. Sojinrin was speaking at a session of the UN Commission on Science and Technology for Development, meeting in Geneva, Switzerland this week from 14 to 18 May.

With more than 1 billion people – about 14% of the world’s population –  still without access to energy, finding affordable ways to get electricity in their homes is crucial if many countries are going to have a shot at achieving some of the Sustainable Development Goals (SDGs), including clean energy for all, zero poverty, good health and well-being, and gender equality.

In sub-Saharan Africa, where Solar Sisters operates, about 600 million are off the grid. Those without power live primarily in rural areas, where poverty is most rampant and where, according to Ms. Sojinrin, women and girls make up 70-80% of the population.

Without electricity, children are left to study with candles or kerosene lamps and women have no choice but to cook with an open fire, exposing them to fire hazards and toxic fumes.

Although energy poverty affects everyone in the home, it hits women and girls the hardest, she said. 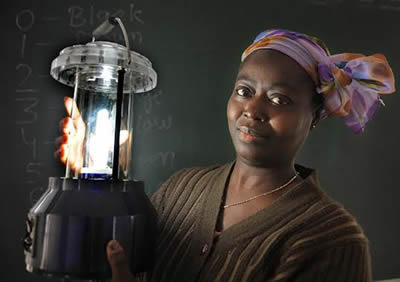 According to her, “If energy poverty were a person, it would be a woman.”

“Traditionally in Africa, women are responsible for how the home is lit, how the food is cooked,” she said. “So a lot of their daytime hours are spent gathering wood for fuel.” And this leaves less time for school or for work outside the home.

For her, energy poverty helps explain why girls account for most of the estimated 10 million children who don’t go to school in Nigeria, the country where she manages Solar Sister’s operations. It’s also one of the reasons why the majority of the world’s poor are women.

But cooking with firewood not only stifles their education and economic opportunities. It also seriously affects their health. According the World Health Organization, it’s as harmful as smoking between three and 20 packs of cigarettes a day and kills almost 100,000 women in Nigeria each year.

In fact, household pollution, of which open fire kitchens are a main source, is the biggest killer in the country after Malaria and AIDS.

And with an estimated 2.8 billion people – about one third of the world’s population – still cooking with polluting fuels such as kerosene, charcoal and dung, this is an issue that affects almost all rural communities in developing countries.

That’s why, according to Angel Gonzalez-Sanz, chief of UNCTAD’s science, technology and ICT branch, SDG 7 – the affordable and clean energy goal – “is not only about increasing the share of renewable energies in the energy mix but also about the elimination of the traditional biomass, which is also dirty biomass.”

Ms. Sojinrin and Mr. Gonzalez-Sanz were speaking during a session on the topic “The role of science, technology and innovation in increasing substantially the share of renewable energy by 2030”.

To help guide the discussion, UNCTAD, as the host organization of the UN Commission on Science and Technology for Development, had prepared a background report on the topic.

Solar Sister currently works in Nigeria, Tanzania and Uganda. Since its creation in 2010, the not-for-profit organization has trained more than 2,500 local women as entrepreneurs to sell affordable clean energy products in the most impoverished and remote communities.

A recent assessment of its work by the International Centre for Research on Women concluded that Solar Sister’s work model had improved women’s lives and made communities safer.