An UNCTAD analysis of African food trade identified tea and potatoes as good examples of how agricultural &quot;value chains&quot; can be built on the continent.

Basic crops grown in Africa can be made into higher-value products, whether it's by bagging tea or turning potatoes into frozen French fries, creating jobs and fueling growth in the continent, according to a recent UNCTAD assessment of the continent's food trade.

The potential of basic crops to form such agricultural "value chains" remains untapped in several sectors, the assessment said.

The assessment, part of the report From Regional Economic Communities to a Continental Free Trade Area, also looked at highly-traded commodities in Africa such as avocados, cashews, onions, pineapples, beef and poultry.

The findings provide useful insight for trade negotiators ironing out agricultural policies for Africa's Continental Free Trade Area (CFTA) ahead of a March 2018 summit of African leaders in Kigali, Rwanda, where the deal is due to be signed. 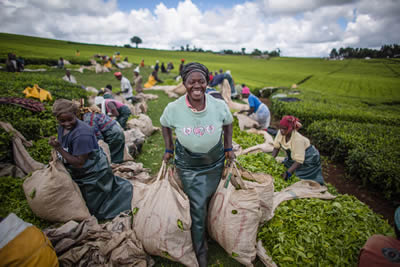 Many leaders see the continent-wide free trade agreement as necessary to boost intra-African trade, which for manufactured goods dropped from 18% in 2005 to about 15% in 2010-2015, according to the African Development Bank.

If fully implemented, the agreement would free up the movement of people and goods across the continent, currently grouped into trading blocs such as the East African Community, the Economic Community of West African States and the Southern African Development Community, to name a few.

"Intra-African trade will not truly take off until the walls come down," said Bonapas Onguglo, in charge of UNCTAD's trade and analysis branch, adding that 80% of trade between countries on the continent happens within these economic communities.

"The economies of many importing countries of African goods are still struggling to pick up, and this has been hindering Africa's growth," Mr. Onguglo said. "If the continent wants to achieve its development objectives, it needs to start trading more with itself."

This is particularly true for agricultural products, given that food insecurity continues to threaten Africa, the region of the world with the highest rate of population growth. One out of four Africans more than 15 years old faces hunger every day, according to the UN Food and Agriculture Organization.

Part and parcel of the new opportunities in the CFTA will be building agricultural value chains across the continent, so that the activities that add value to food as it moves from the farm to fork happen in Africa.

At present food production on the continent is in general characterized by low productivity and high unit costs. This is why, for example, frozen poultry from Brazil outcompetes fresh poultry from Mozambique in regional markets.

Between 2004 and 2014, chicken imports to sub-Saharan Africa tripled, according to figures from the US Department of Agriculture.

Regional value chains would allow African producers to upgrade their skills and production processes, a key step to improving their ability to compete more effectively.

"It's not just a question of boosting trade in, say, potatoes and pineapples. It's also about getting African countries to produce and trade more pineapple juice and potato chips," Henrique Pacini, one of the report's authors, said.

"The hope is that the CFTA will give a boost to the continent's agro-industries," he added.

Since agriculture accounts for 25% of African GDP and provides up to 60% of all jobs on the continent, developing agricultural value chains in the region will be essential to the CFTA's success, the report, subtitled "Strategic Tools to Assist Negotiators and Agricultural Policy Design in Africa", says.

And the experience of tea and potato value chains could provide important lessons for agricultural policymakers.

But most of this was sold to international buyers at the world's second-largest tea auction centre in Mombasa, and steeped in tea houses and homes outside of Africa.

If most of Kenya's tea is sold abroad, who satisfies African's appetite for tea - or chai (as it is known in many parts of the continent)? According to the report, the tea grown in Rwanda, Uganda and Zimbabwe is almost entirely bought, processed and consumed in Africa.

Rwanda and Uganda are the main tea suppliers to Kenya. In fact, these two countries rely entirely on Kenya to re-export their tea to the other members of the Common Market for Eastern and Southern Africa such as Egypt, the continent's largest tea importer.

Because Rwanda and Uganda's tea growers rely entirely on African markets, their experience could provide valuable lessons on how to strengthen regional supply chains for other agricultural commodities and processed foods in Africa.

Egypt, Africa's principal tea importer is also the continent's main exporter of potatoes, producing about 70% of all African spuds. Most are sold to the European Union.

But when it comes to intra-African trade in potatoes, South Africa and Ethiopia play an important role, accounting for about 87% of all African potatoes traded within the continent.

Both countries rely entirely on their respective regional economic communities to export potatoes within the continent - South Africa through the Southern African Development Community and Ethiopia through the Intergovernmental Authority on Development, a lesser-known trading bloc.

In South Africa, potato production has grown strongly over the past 15 years, with yields averaging around 34 tonnes per hectare. More important, the country has a sophisticated processing sector, which uses some 250,000 tonnes of potatoes a year to make mainly frozen French fries and crisps, which are distributed to restaurants and homes across the continent.

While Africa is home to almost 60% of the world's arable land it imports some $35 million in food each year.

Excessive dependency on imports to feed a continent will present clear risks for the future given the volatile nature of food markets, the report says.