Oceans and seas play a major role in helping achieve sustainable development, economic growth and improved livelihoods. The oceans economy is valued at an estimated US$3-6 trillion per year, noted Mr. Guillermo Valles, Director of UNCTAD's Division on International Trade on Goods and Services, and Commodities. He also pointed out that over 350 million jobs are linked to the oceans economy and that almost half of the world's population relies on it for their livelihoods.

Mr. Paulo Kautoke, Director of the Trade Division of the Commonwealth Secretariat, stressed that oceans and their resources are under enormous pressure, as highlighted by the findings that only one third of the amount of fish available from capture fisheries in 1970 will be available by 2050.

Mr. Valles further noted that oceans and seas are key for international trade. In 2014, exports of fish and fish products reached USD 143 billion of which 56 per cent originated in developing countries. He also noted that shipping is a well-established ocean-based economic sector that generates growth, employment, income and revenue. Around 80 per cent of global trade by volume and over 55 per cent by value is carried by sea. Equally important is the role of the tourism sector. Half of the world's tourists choose to spend their time in coastal areas. This sector can contribute to above 25 per cent of the GDP of several developing countries', especially in small island developing states and least developed countries.

Dr. Awni Behnam, Honorary President of the International Ocean Institute (IOI), noted that the ocean economy is linked to the blue economy concept relating to the common natural heritage of mankind, underscoring the importance for a sustainable treatment of the Ocean. In that regard, the interdependence between Sustainable Development Goal (SDG) 14 and other SDGs must be stressed. Ms. Antonella Vassallo, Managing Director of the IOI, emphasized the importance of moral, legal and ethical values in ocean governance for equity and peaceful usage of the ocean.

In addition to these linkages between different SDGs, other frameworks must also be taken into account. The oceans agenda is governed by a vast tapestry of hard and soft-law rules and frameworks, including UNCLOS, the FAO guidelines, WTO rules, as well as a myriad of national and regional regulatory regimes. Thus, Mr. Valles underlined that an utmost task in pursuing SDG 14 is making that tapestry of rules work for SDG 14.

H.E. Ms. Mere Falemaka, Permanent Representative of the Pacific Islands Forum in Geneva and Chairperson of the Ocean Economy Seminar, welcomed this UNCTAD initiative to promote discussions and action. She underlined that implementing SDG 14 in respect of trade-related policies and measures is a pertinent imperative. Ocean economic sectors including trade, transport and tourism can boost growth and sustainable development in developing countries, especially SIDS. 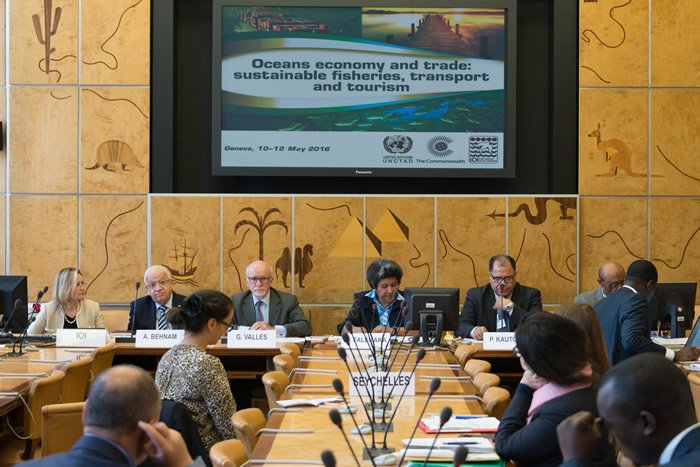