Delivering a keynote address at the round table on &quot;Reducing debt vulnerability, managing inflation/deflation,&quot; UNCTAD Secretary-General Supachai Panitchpakdi called for attention to be given to deflationary pressures, a systemic approach to debt vulnerability, adequate regulatory system for banks, and regulatory oversight of credit rating agencies.

The round table session was part of the UN General Assembly's high-level thematic debate on The State of the World Economy and Finance and its Impact on Development held at UN Headquarters in New York, 17 - 18 May 2012.
The event was jointly convened by General Assembly President Nassir Abdulaziz al-Nasser and UN Secretary-General Ban Ki-moon to explore ways of improving the overall global economic and financial situation and to discuss its impact on development efforts and social processes.
Other keynote speakers at the event included the President of the European Commission, José Manuel Barroso; Nobel Prize Laureate and President of Columbia University, Joseph Stiglitz; and Paul Volcker, former head of the United States Federal Reserve. 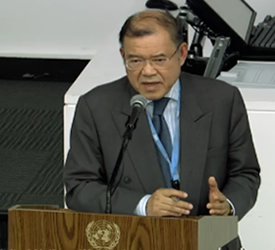 UNCTAD Secretary-General Supachai remarked at the round table that, as even the world’s largest economic players struggled with imbalances and intractable issues, the world’s smaller economies had their own share of problems.
In the last 10 years, on average, developing countries had been successful in reducing their rates of inflation from about 30 per cent per year to less than 6 per cent per year.
With some exceptions, the “inflation issue” was much less urgent than in the past.  However, there had been a general slowdown in global economic growth and the “squeeze” on the wage shares of total income continued unabated.  Overall, today there were indications of the need to fight deflation, instead of inflation.
The world had learned several lessons from the recent case of Iceland, which had entered into, and then come out of, a situation of excessive debt, he said.  The first lesson was that it was difficult, if not impossible, to let a pan-European financial market function freely without a regulatory system.  Secondly, policies on financial stability had focused too much on individual institutions and too little on the financial sector as a whole.  Individual issues could mislead the system and the danger of a "herd instinct" continues in the system; there was a need for more comprehensive measures.  Finally, the regulatory system was “old-fashioned” compared to the fast, “IT-driven nature” of modern banking.  There was no regulatory system in place that could keep track of all the transactions currently being made, he said, and there must also be regulatory oversight of credit rating agencies.
With regard to public debt, he said the average level of external debt compared to GDP had fallen in recent years.  However, performance was uneven around the globe, and some regions were not able to enter the loan market.  The causes of debt vulnerability were still a problem, and today, 94 out of 128 developing countries still suffered from account deficits.  Those challenges were especially prominent in the least developed countries.  The high debt levels of developing and least-developed countries were closely related to the rising costs of commodity prices caused by speculative activities.
He also highlighted the linkages between the issues of debt vulnerability and debt sustainability, underlining the importance of:
UNCTAD was currently drafting a set of “principles of responsible lending and borrowing”, which would focus, among other things, on transparency and accountability; early warning systems must be implemented or improved, and the “exchange rate issue” must be dealt with, he said.
Other keynote speakers at the round table included Senator Alan K. Simpson (Ret.), Co-Chairman of the US National Commission on Fiscal Responsibility and Reform (2010), and Professor Jeffrey Sachs of Columbia University.
____________________________________________________________________________________
United Nations Webcast: