COVID-19 lowers maritime freight in Latin America and the Caribbean
Slow progress in digitalization and paperless transactions, lack of transparency in regulatory procedures and weaknesses in long-term planning are among the issues holding back port performance in the region.

Maritime freight loaded and discharged in Latin America and the Caribbean is estimated to have fallen by 3.4% between 2019 and 2020, according to UNCTAD’s Review of Maritime Transport 2021 published on 18 November.

Top 10 countries in the region

The spread and performance of ports varies greatly. The top 10 countries according to the number of port terminals – Brazil (top with 306), Mexico, Argentina, Chile, Peru, Colombia, Paraguay, Venezuela, Panama and Cuba – together account for 74% of the region’s port facilities.

On the other side of the picture, 15 countries or territories have five or fewer port facilities each – Antiqua and Barbuda, Bermuda, Belize, Barbados, Turks and Caicos Islands, El Salvador, Aruba, Bonaire, Cayman Islands, Dominica, Anguilla, Montserrat, Sint Eustatius, Saint Barth and Sint Maarten. 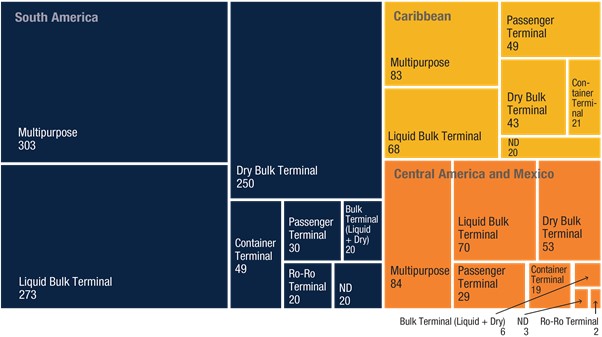 The report notes that the ports system differs across the region in terms of maturity and productivity. For example, in the liquid and dry bulk categories, productivity is higher in the most specialized countries, as in Argentina, Brazil and Columbia, which move nearly 600 million tonnes a year.

“In the last few years, the region has seen enormous growth in terms of containers, although only four specialized terminals yet have semi-automated processes. Progress in digitalization and paperless transactions has also been slow, and regulatory procedures are not very transparent, making it difficult to promote effective competition,” the report says. “Long-term planning has shown a lack of foresight for ports and connectivity with hinterland infrastructure.”

Some areas have weakly regulated quasi-monopolistic markets while others have excessive competition, which may prove harmful, the report says. Systems for the design, granting and monitoring of concessions are hampered by institutional weaknesses and the end result is often inefficiency and low productivity.

Logistics and port services are provided through 1,967 port facilities across 50 countries and territories in the region, of which just under two thirds are certified as compliant with the International Ship and Port Facility Security (ISPS) code.

Panama continued to be the country with the world’s largest fleet (dwt and commercial value in $) registered under its flag.

The best-connected port based on UNCTAD’s Liner Shipping Connectivity Index (LSCI) in Latin America and the Caribbean in 2020 was Cartagena, Colombia.