In the face of a deep global recession amid a still unchecked pandemic, the world needs a global recovery plan that can return even the most vulnerable countries to a stronger position than they were in before COVID-19, says UNCTAD`s Trade and Development Report 2020 launched today.

According to the report, key to success will be tackling a series of pre-existing conditions that were threatening the health of the global economy even before the pandemic hit.

They include hyper-inequality, unsustainable levels of debt, weak investment, wage stagnation in the developed world and insufficient formal sector jobs in the developing world.

UNCTAD Secretary-General Mukhisa Kituyi said: “Building a better world require smart actions now. The lives of future generations, indeed of the planet itself, will depend on the choices we all take over the coming months.”

Drawing lessons from the global financial crisis, the report argues that recovery and reform, at both the national and international levels, must go hand in hand if building back better is to move beyond sloganeering and become the lodestar of a more resilient future.

It shows that a big public investment push with effective international support and coordination could all but double the global growth rate over the next decade along with improved debt sustainability and a fairer distribution of income (see Table 1).

If last year`s economic forecasts had materialized, the world would now be enjoying a pick-up in global growth, led by the large emerging economies, the report says.

Instead, the global economy will contract this year by over 4%, with an estimated swing of 6.8 percentage points leaving a shortfall in global output by year’s end of over $6 trillion (in current US dollars).

And as domestic activity contracts sharply almost everywhere, so goes the international economy; trade will shrink by around one-fifth this year, foreign direct investment by up to 40% and remittances will drop by over $100 billion.

The biggest absolute falls in output will be in the developed world, with some countries set to register a double-digit decline over the year.

But the greatest economic and social damage will be in the developing world, where levels of informality are high, commodities and tourism major sources of foreign exchange, and fiscal space has been squeezed under a mountain of debt.

Between 90 million and 120 million people will be pushed into extreme poverty in the developing world, with close to 300 million facing food insecurity.

Latin America is likely to be particularly hard hit with a drop in output this year of 7.6%, with sharp declines, possibly double digit, in some of the largest economies, notably Argentina and Mexico, but the small Caribbean economies are also facing unprecedented economic devastation.

The contrast with East Asia, where growth will remain in positive territory, albeit much lower than in 2019 – China, for example, is expected to grow at 1.3% – is stark (see Table 2).

The temporary relief packages adopted mainly by advanced economies – estimated at a staggering $13 trillion for G20 countries – have mitigated the decline and with the lockdown easing, a rebound will take place in the second half of the year albeit unevenly across countries.

With a bigger fiscal punch than after the last crisis –including direct payments to households – and East Asian economies riding out the economic storm better than expected, the global downturn is not likely to be as harsh as some forecasts had suggested earlier this year.

All eyes are now on 2021. Even if economic activity continues to bounce back and advanced country governments continue with the current mix of fiscal and monetary measures, employment will not fully recover, many countries will remain in debt distress and income gaps will widen.

“Forecasters’ talk of a V-shaped recovery can easily mislead. Such a recovery would require double-digit global growth next year, which is out of the question,” said Richard Kozul-Wright, UNCTAD’s director of the division on globalization and development strategies.

According to the report, even a 5% growth rate – an unlikely outcome -- would still leave a $12 trillion income shortfall from what had been expected in 2019. If no other shock or contractionary forces surface, a global growth around 4% next year should be possible.

That will take the world to what some are calling the “90% economy” (see Figure 1) which, in the absence of serious reform, will not only be smaller than before but more fragile, more unequal and less innovative. That leaves an uncomfortable amount of room for policy uncertainty and further slippages.

Much of the discomfort comes from the ongoing disconnect between the financial and real sectors of the economy (see Figures 2 and 3), which carries the threat of a policy reversal after disaster relief ends.

In the absence of a radical policy shift and effective coordination at the international level, a return to austerity will become the winning policy mindset with success measured in terms of higher share prices, lower wage costs and fiscal prudence.

“Fiscal austerity and corporate cost-cutting would do nothing but worsen the globe’s pre-existing conditions,” Mr. Kozul-Wright said.

“New rules on international trade and investment, and new privileges for owners of intellectual property and vital technologies would further constrict the policy space developing countries need for sustainable growth,” he added.

Taking that route would lead to a fizzling recovery next year, with a double-dip recession stalking many countries in 2022. With geopolitical tensions from before COVID-19 – in the form of trade disputes, fights over key technologies, migration pressures and environmental crises – unresolved, and international cooperation faltering, the post-pandemic world could turn a lot uglier.

This scenario is already causing alarm in many developing countries where the urgent need for increased health spending to tackle the spread of the virus is running up against declining tax revenues, which combined with a collapse in export earnings and pending debt payments, has exposed a $2 trillion to $3 trillion gap in their financing needs over the next 18 months.

The steps so far taken by the international community with respect to debt suspension and new credit facilities, while moving in the right direction, are drops in their financing bucket and swap lines provided by the Federal Reserve are partial, in both senses of the word.

The shortfall can quickly turn into a vicious cycle in developing countries and the inability of the international community to agree on comprehensive debt relief, resistance to rapid provision of appropriate levels of emergency liquidity and the reluctance of advanced economies to rein in private bondholders in sovereign debt negotiations are, the report concludes, early warning signs that things could get worse.

A “lost decade” looms, foreclosing on any hope of delivering the 2030 Agenda for Sustainable Development. Model simulations indicate that an early return of austerity would set off a vicious circle of low employment generation, wage stagnation, slower economic growth and higher pressure on government budgets.

In particular, a return to pre-pandemic austerity will reduce annual global growth by 1 percentage point and increase the global unemployment rate by 2 percentage points until 2030. Labour income shares will also decrease, by more than 3 percentage points globally, implying a transfer of income from workers to profit earners of approximately $40 trillion by 2030.

Got to be some changes made

An aborted economic recovery, or worse, another “lost decade”, is not inevitable. It is a matter of policy choice.

An inclusive and sustained recovery will only happen if governments in the advanced countries not only keep spending for as long as it takes for their own private sector to regain the confidence to spend themselves, but also extend financial support to help developing countries tackle the underlying stresses and fractures that are holding back their recovery and growth prospects.

A global recovery plan must be both bold and comprehensive, built around a coordinated macroeconomic expansion focused on job creation and higher wages and supported by a big public investment push into cleaner energy, environmental protection, sustainable transport systems and the care economy.

But, if fiscal policy is to be a useful instrument for transformative development as well as macroeconomic stabilization, complementary industrial policies will also be needed.

The report points to actions that the multilateral system can take now in support of recovering better, including expanded use of Special Drawing Rights to boost global liquidity and completion of the Doha Development Agenda to recover trust in the international trading system.

As the United Nations' system marks its 75 anniversary, bolder reforms will be needed to plug gaps and correct biases in it and to build resilience, including stronger international competition laws to clamp down on corporate rent-seeking; a Marshall Plan for a global health recovery; an independent global debt authority and a public international credit rating agency. 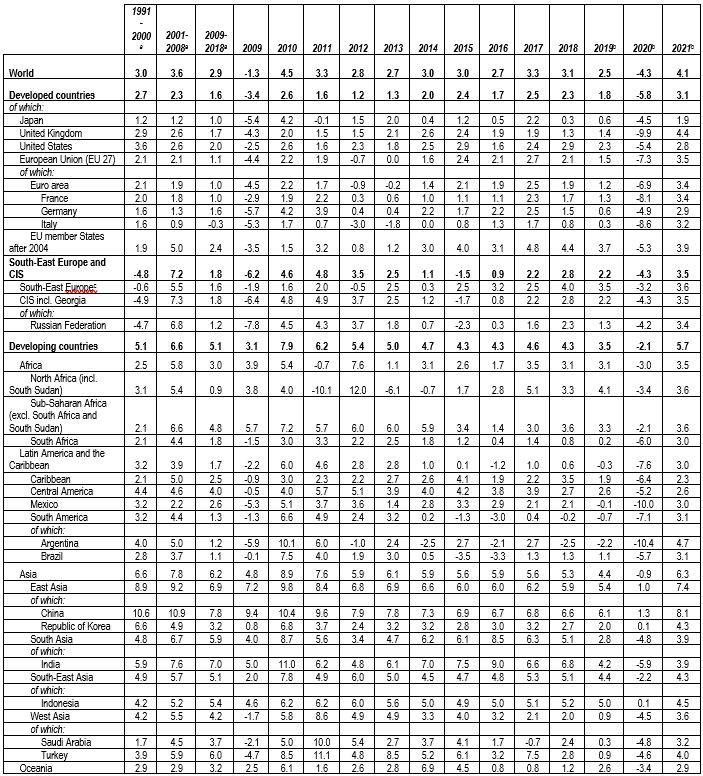 Note:  Calculations for country aggregates are based on GDP at constant 2015 dollars.

c  Albania, Bosnia and Herzegovina, Montenegro, Serbia and The Republic of North Macedonia. 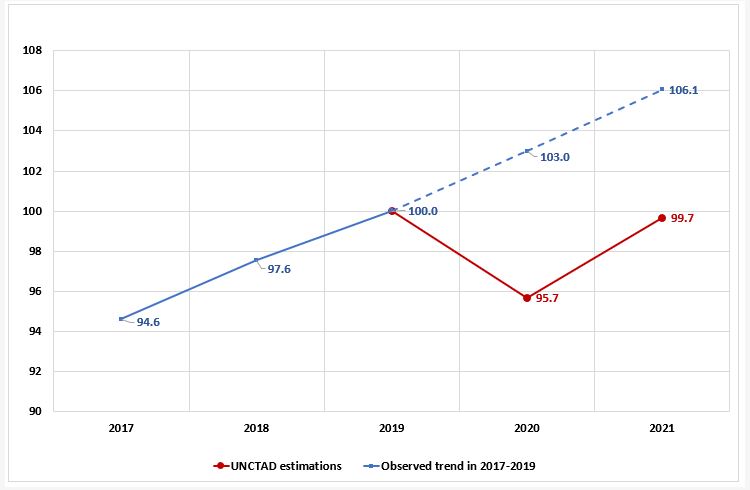 Figure 3: Compensation of Employees and Stock Market Returns in the United States 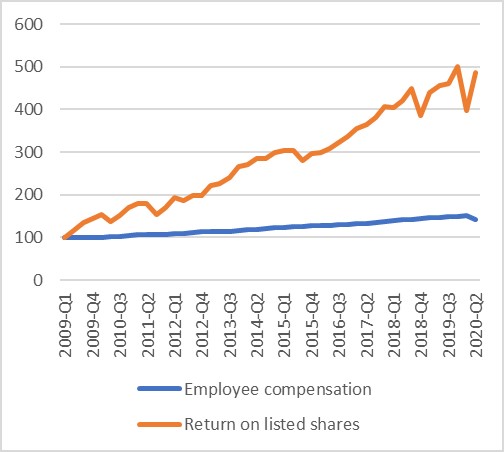