Foreign Direct Investment To Africa Fell By A Moderate Three Per Cent In 2016, Says UN Report

​Foreign direct investment (FDI) flows to Africa continued to decline in 2016, by three per cent to $59 billion, according to UNCTAD’s World Investment Report 2017. However, inflows to the continent remained unevenly distributed, with five countries (Angola, Egypt, Nigeria, Ghana and Ethiopia) accounting for 57 per cent of the total.

Robust FDI to Egypt continued to boost inflows to North Africa, which rose by 11 per cent, to $14.5 billion (figure 1). The flows to Egypt, up 17 per cent to $8.1 billion, were driven mainly by the discovery of gas reserves by foreign firms.

As subdued commodity prices diminished investor interest in Sub-Saharan Africa, its inflows declined by 7 per cent, to $45 billion. FDI flows to Central Africa decreased by 15 per cent in 2016, to $5.1 billion. The Democratic Republic of the Congo saw a decline of 28 per cent to $1.2 billion, as the country attracted investment only in its mineral sector. Nevertheless, flows to some countries rose. The Congo went up by eight per cent to $2 billion, mostly owing to continued investments by Chinese companies.

East Africa received $7.1 billion in FDI in 2016, up 13 per cent from 2015. Flows to Ethiopia rose by 46 per cent to $3.2 billion, propelled by investments in infrastructure and manufacturing.

FDI flows to West Africa grew by 12 per cent to $11.4 billion in 2016, supported by recovering investment in Nigeria, although flows remained well below record levels. FDI inflows to Ghana increased by nine per cent to $3.5 billion, driven by both hydrocarbons and cocoa processing projects.

In Southern Africa, FDI inflows fell by 18 per cent to $21.2 billion, as flows declined in eight of the ten countries in the subregion. In Angola, FDI flows declined by 11 per cent to $14.4 billion as reinvested earnings shrank. South Africa, the economic powerhouse of the continent, continued to underperform, with FDI at a paltry $2.3 billion, up 31 per cent from 2015’s record low, but still well below its past average.

Multinational enterprises (MNEs) from developed economies remained the largest investors in Africa, although investors from developing economies (such as China, India, and South Africa) are increasingly active.

FDI outflows from Africa remained flat, at $18.2 billion (up 1 per cent from 2015). The reduced investments from South Africa, the Democratic Republic of the Congo, Ghana and Nigeria, in that order, were more than offset by the rise of outflows from Angola, the region’s largest investor.

FDI inflows to Africa are expected to increase in 2017, to about $65 billion, in view of modest oil price rises and a potential upturn in non-oil FDI. Growing regional integration should foster Africa’s competitive global integration and encourage stronger FDI flows. 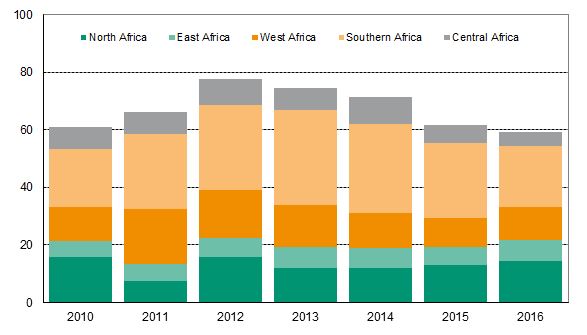 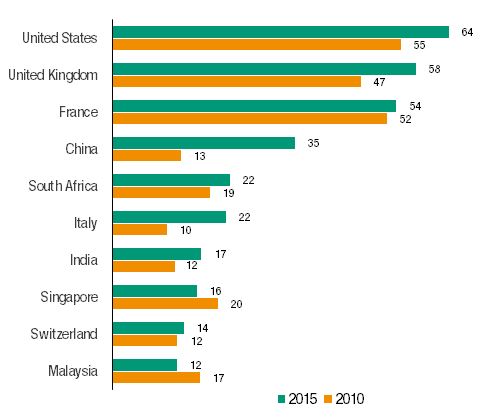 Source: UNCTAD, World Investment Report 2017.
Note: Numbers presented in this figure are based on the FDI stock data of partner countries.