Within individual economies, FDI flows fluctuated widely year on year as multinational enterprises engaged in mergers and acquisitions (M&As). This activity involved both the disposal and acquisition of assets. In particular, the divestment by Vodafone of the United Kingdom of its stake in Verizon Wireless of the United States (to US telecommunications group Verizon Communications), worth $130 billion and completed in February 2014, was the single most important deal, contributing to the decline in FDI flows in developed economies in 2014. Against the backdrop of a global savings glut – specifically savings by multinational enterprises – intracompany loans continued to have major impacts, adding to the volatility.

By region, FDI flows into Europe fell by 11 per cent to $289 billion, continuing a downward trend that has persisted since 2012. Inflows to 18 European economies fell in 2014, including to such recipients as Belgium, France and Ireland that had attracted large investment in 2013. In contrast, some of the European countries that made the largest gains in 2014 were those that had received negative inflows in 2013, such as Finland and Switzerland. FDI to the United Kingdom jumped to $72 billion in 2014, thus retaining its position as the largest recipient country of foreign direct investment in Europe (Figure 1).

Outflows from European countries were virtually unchanged at $316 billion. Germany almost tripled its outflows, becoming the largest direct investor country in Europe in 2014. France also increased its outflows sharply to $43 billion (figure 2). In contrast, FDI from other major investor countries in Europe plummeted; FDI from the Netherlands (the European country that invested the most in 2013) lost 28 per cent, and flows from Luxembourg (which invested the second largest amount in 2013) became negative. Divestment and withdrawal of funds from overseas by United Kingdom multinational enterprises continued to exceed the value of new investment, leaving net outflows to fall further to −$60 billion.

Inflows to North America halved to $146 billon, falling in both Canada and the United States. North America’s global share was reduced to 12 per cent (compared to 21 per cent in 2013). M&A data show that divestment of assets in the United States by foreign multinational enterprises amounted to $176 billion in 2014 due to the Verizon divestment, more than double the average during 2011–2013 of $68 billion. Without this exceptional deal, inflows to the United States would have stayed at a level comparable to 2013. Despite the decline, the United States remained the largest recipient of FDI flows among developed economies. Outflows from Canada and the United States, which had already been on an upward trend in 2013, extended their gains reaching $390 billion, although they were still at a level well below those seen in 2011.

In Asia-Pacific, FDI flows into Australia and Japan contracted, while those to New Zealand rebounded. Outflows from Japan declined by 16 per cent ending a three-year run of expansion.

The impact of the operations of multinational enterprises on the balance of payments has increased, not only through FDI, but also through trade and investment income. The recent experience of the United States and Japan shows that outward FDI has helped create avenues for exports of knowledge-intensive services, as illustrated by the growing royalty payments from foreign affiliates to parent companies. Furthermore, the growing investment income from outward FDI has had the effect of counterbalancing the trade deficit. 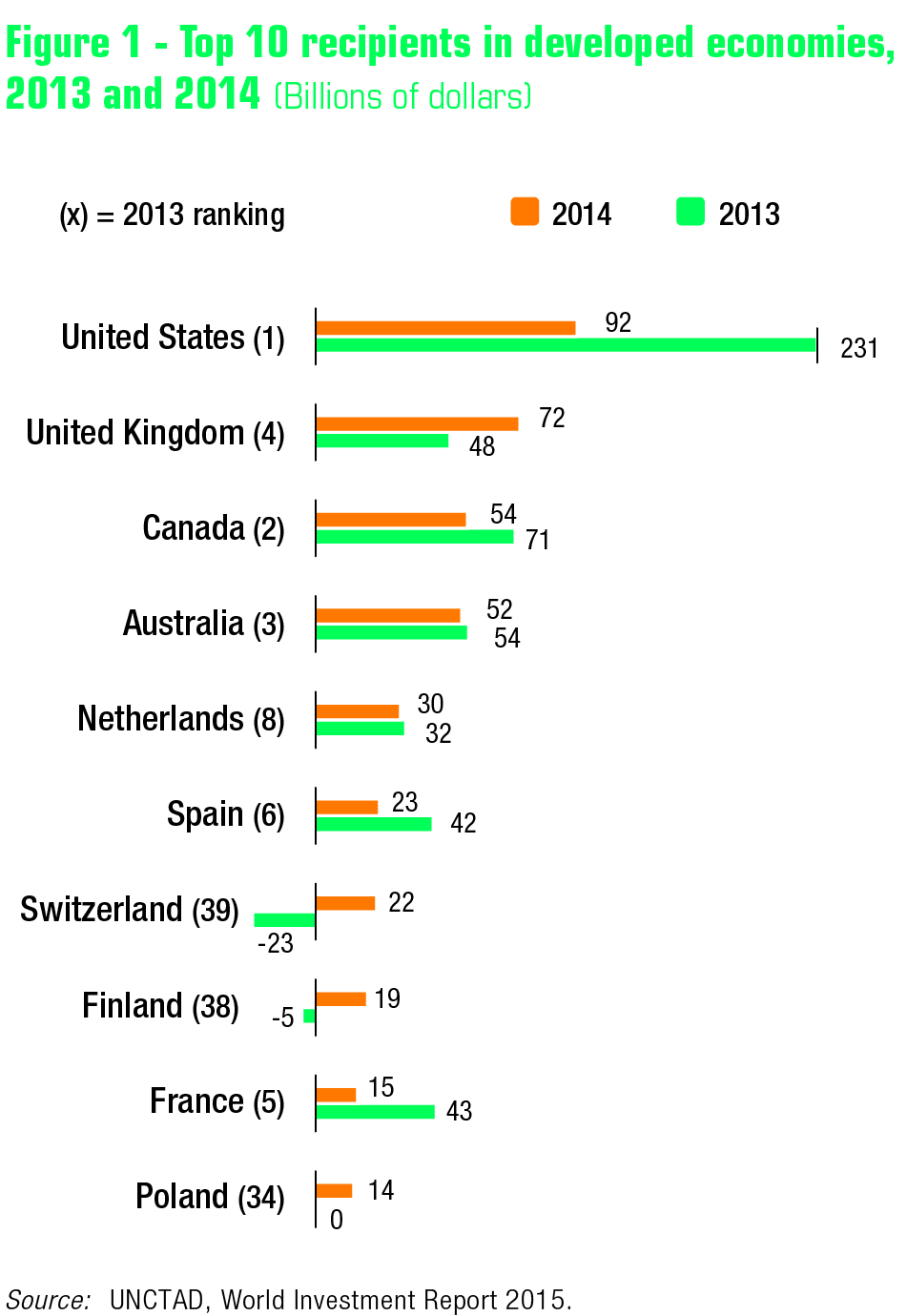 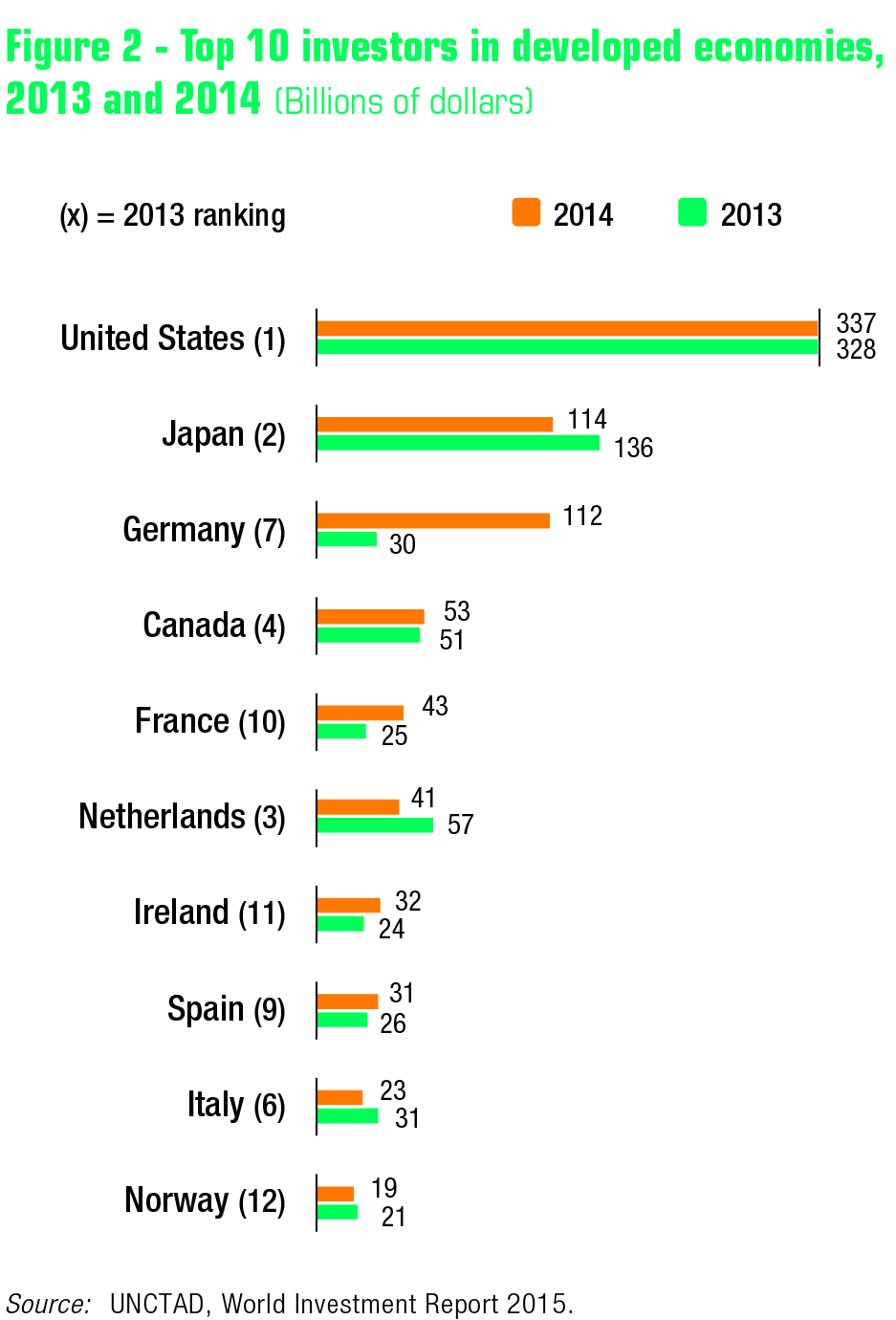