​ Foreign direct investment (FDI) inflows to 32 landlocked developing countries (LLDCs)1 fell by 11 per cent to $29.7 billion in 2013, according to UNCTAD's World Investment Report 20142 . This follows a slight fall in 2012, which makes 2013 the first year that FDI has fallen two years in a row for this group of economies.

Investment to the LLDCs was still concentrated in the Central Asian and European transition economy LLDCs (i.e. Armenia, Azerbaijan, Kazakhstan, Kyrgyzstan, the Former Yugoslav Republic of Macedonia, the Republic of Moldova, Tajikistan, Turkmenistan and Uzbekistan), which accounted for over 60 per cent of FDI inflows.

Asian LLDCs experienced the largest fall in FDI flows of nearly 50 per cent, mainly due to a precipitous decline in investment in Mongolia. According to the report, this was mainly the result of a new investment law introduced in early 2012 which may have affected several investors. The law was amended in November 2013.

Despite increasing their share of foreign direct investment into landlocked developing countries from 18 to 23 per cent, the picture for African LLDCs was mixed: half the economies experienced falls and half – predominantly mineral exporting economies – an increase, with strong performance in Zambia, where flows topped $1.8 billion.

Flows into the Latin American LLDCs jumped by almost 40 per cent as a result of the steadily increasing attractiveness of the Plurinational State of Bolivia to foreign investors.

The report notes a shift in the composition of investors. In contrast to 2012, when the principal sources on investment were the Republic of Korea and the West Asian economies, in 2013 developed economy investors took the lead, increasing their share as investors in LLDCs from 29 per cent in 2012 to 57 per cent last year. Services continued to attract strong investor interest, especially in the electricity, water and gas sectors and the transport sector.

With the Second United Nations Conference on Landlocked Developing Countries taking place in Vienna, Austria, in November 2014, the latest FDI figures come at an important juncture as government officials and investors assess economic opportunities in these markets.

Despite the fall in the headline figure for FDI this year, the report argues that FDI remains relatively more important for growth and capital formation in the LLDCs than in developing countries as a whole: in terms of the share of FDI stock in GDP (table 1), it has averaged 5 percentage points higher than in developing countries. In terms of the ratio of FDI to gross fixed capital formation (GFCF) – one of the building blocks of development – FDI’s role was almost twice as high for LLDCs than for developing economies over the previous 10 years (table 2). 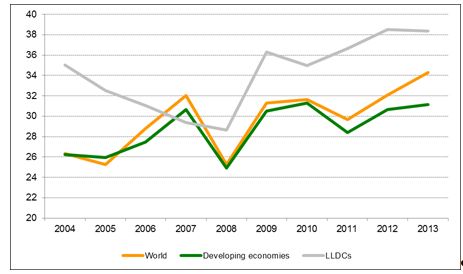 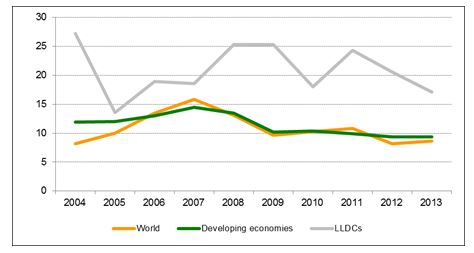