​FDI inflows to small island developing States (SIDS) declined by 16 per cent to $5.7 billion in 2013, after two-year recovery, UNCTAD’s World Investment Report 20141  Investment flows decreased in all subregions, but unevenly, with African SIDS registering the highest decline (41 per cent to $499 million), followed by Latin American SIDS (14 per cent to $4.3 billion). SIDS in Asia and Oceania registered a slight 3 per cent decline to $853 million.

Small island developing States face unique development challenges that have been formally recognized by the United Nations since 1994. A third United Nations Conference on SIDS is to be held in September 2014 in Samoa. For this occasion, the World Investment Report has undertaken a decade review of FDI to 29 SIDS countries2.

Caribbean SIDS have traditionally attracted the bulk of FDI in this group. Their proximity to and economic dependence on the large North American market are among the main factors explaining their higher attractiveness compared with other SIDS regions. However, SIDS located in Africa, Asia and Oceania experienced relatively stronger FDI growth during the 2000s, increasing their share in total FDI flows to the group from 11 per cent in 2001–2004, to 20 per cent in 2005–2008, up to 29 per cent in 2009–2013.

Although FDI flows into the SIDS are very small in relative terms, accounting for only 0.4 per cent of global FDI flows over 2001–2013, they are very high compared with the size of the economies of small island developing States. The ratio of inflows to current GDP during 2001–2013 was more than twice the average for other developing and transition economies. These relatively high inflows into the group are the result of the fiscal advantages offered to foreign investors by a number of SIDS, and of a limited number of very large investments in extractive industries.

Foreign investor's interest to engage in investment projects in small islands developing states can be gauged, in part, through the amount of their announced investment in greenfield projects in this group of countries. Developed-country transnational corporations (TNCs) announced almost two thirds of this amount in 2003-2013. Resource-rich countries such as Papua New Guinea, Trinidad and Tobago, and Timor-Leste represented 63 per cent of such TNCs’ announced investments. TNCs from developing and transition economies have focused their interest mainly on Papua New Guinea, Maldives, Mauritius and Jamaica, which together represented 89 per cent of those TNCs’ total announced investment (see table 1).

The endowments that small island developing States have, principally in natural resources and human capital, in addition to trade preference regimes that give them, in principle, preferential access to developed-country markets, are among the most important elements of their attractiveness to FDI.

FDI represents an important source of investment capital in industries that are critical to growth and development of small island developing States. The challenge for SIDS is to ensure that FDI activities do not increase their structural vulnerabilities and cause any permanent harm to sustainable use of land, water and marine resources. 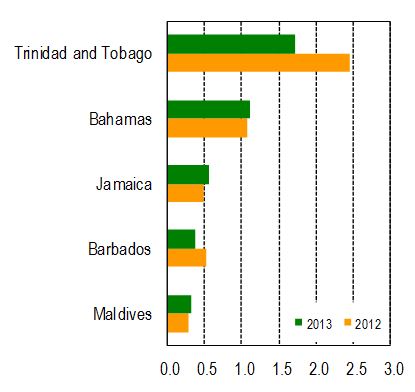