“A 38 per cent jump in flows, to $1.76 trillion dollars, gives hope that global FDI is at long last returning to a growth path. But we are not yet out of the woods," UNCTAD Secretary-General Mukhisa Kituyi said.

Globally, that jump shows that the FDI recovery was strong in 2015. A surge in cross-border mergers and acquisitions to $721 billion, from $432 billion in 2014, was the principal factor behind the global rebound. Those acquisitions were due to large corporate reconfigurations by multinational enterprises, including shifting their headquarters, for strategic reasons and for tax inversion purposes.

FDI patterns were therefore affected by tax inversions, mainly in the United States of America and Europe. Several mega-deals resulted in the transfer of the tax domicile of multinational enterprises to jurisdictions that offer lower corporate tax rates and do not levy tax on global earnings. Discounting those large-scale corporate reconfigurations implies a more moderate increase of about 15 per cent in global FDI flows. The value of announced greenfield investment remained at a high level, at $766 billion.

Inward FDI flows to developed economies almost doubled to $962 billion. As a result, the share of developed economies in world FDI inflows leaped from 41 per cent in 2014 to 55 per cent in 2015 (figure 1), reversing a five-year trend during which developing and transition regions had become the main recipients of global FDI. Strong growth in inflows was reported in Europe, as well as in the United States where FDI almost quadrupled, albeit from a historically low level in 2014.

Developing economies also saw FDI inflows reach a new high of $765 billion, up 9 per cent on 2014, because of the performance of Asia. Developing Asia received record annual inflows, with FDI surpassing half a trillion dollars, and remained the largest FDI recipient region in the world. However, flows to both Africa and to Latin America and the Caribbean faltered while flows to the transition economies declined further. Developing economies continue to comprise half of the top 10 host economies for FDI flows (figure 2).

FDI outflows from developed economies increased by 33 per cent to $1.1 trillion, following three years of decline. As a result, developed countries were responsible for 72 per cent of global FDI outflows in 2015, up from 61 per cent in 2014. This 11 percentage point increase broke the nearly uninterrupted relative decline that began in 2007. The increase notwithstanding, developed country outward FDI remained 40 per cent short of its 2007 peak.

By contrast, FDI outflows declined in most developing and transition regions. A combination of challenges, including declining commodity prices and depreciating national currencies, and geopolitical risks were contributing factors. Against the general downward trend in FDI outflows from developing and transition economies, China was a notable exception: its outward FDI remained high, rising from $123 billion to $128 billion, as a result of which it held its position as the third largest investor in the world, after the United States and Japan.

A flurry of acquisitions raised the share of FDI in manufacturing to more than 50 per cent of cross-border mergers and acquisitions in 2015. Sales reached a historical high in absolute terms ($388 billion in 2015), surpassing the previous record set in 2007. FDI in the primary sector, on the other hand, was strongly affected by falling commodity prices, which resulted not only in reductions in planned capital expenditures but also in a sharp fall in reinvested earnings. Reduced FDI in extractives has had a particular impact on FDI flows to developing economies in Africa and Latin America and the Caribbean.

Investment flows to offshore financial hubs – including those to special purpose entities and offshore financial centres – declined in 2015 but remain high (those flows are excluded from UNCTAD FDI statistics). The magnitude of quarterly flows through special purpose entities, in terms of absolute value, rose sharply compared with 2014, reaching the levels last registered in 2012–2013. Meanwhile, investment flows to offshore financial centres continued to retreat from their recent high of $132 billion in 2013, but remained roughly in line with the flows of previous years.

The persistence of financial flows routed through offshore financial hubs, and the consequent fiscal losses due to the disconnect between income generation and productive investment, underscore the pressing need to create greater coherence among tax and investment policies at the global level.

FDI flows are expected to decline in 2016 in both developed and developing economies, barring another wave of cross-border mega-deals and corporate reconfigurations. UNCTAD forecasts that FDI flows are likely to contract by 10–15 per cent in 2016, reflecting the fragility of the global economy, the persistent weakness of aggregate demand, sluggish growth in some commodity-exporting countries, effective policy measures to curb tax inversion deals and a slump in multinational enterprises profits in 2015 to the lowest level since the global economic and financial crisis of 2008/09.

Elevated geopolitical risks and regional tensions could further amplify the expected downturn. Over the medium term, FDI flows are projected to resume growth in 2017 and to surpass $1.8 trillion in 2018. 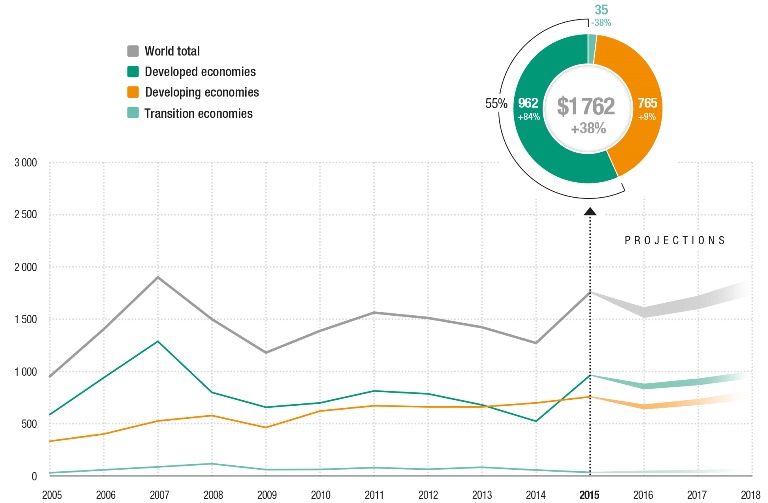 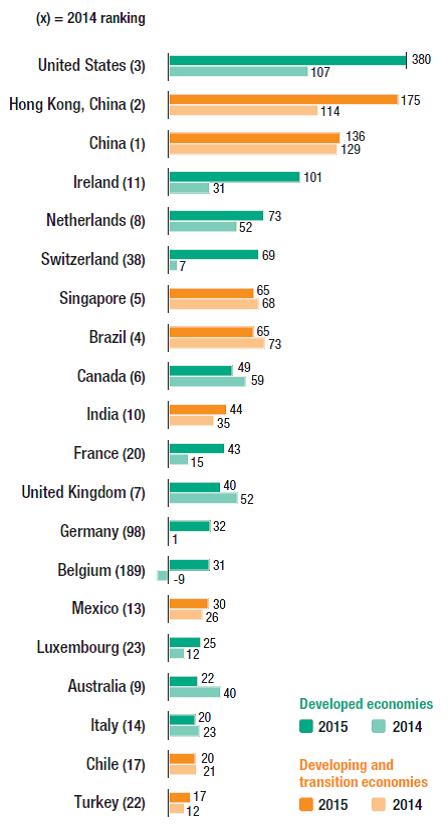