The increasing complexity of the ownership structures of multinational enterprises is leading investment policymakers to consider carefully the effectiveness and suitability of ownership-based measures, as well as the practical implications for their application and enforcement, according to the World Investment Report 2016.

Such “multiple-passport affiliates” are the result of indirect foreign ownership, transit investment through third countries, and round-tripping, the report found. About 30 per cent of foreign affiliates are indirectly foreign owned through a domestic entity; more than 10 per cent are owned through an intermediate entity in a third country; about 1 per cent are ultimately owned by a domestic entity. Cases of “mismatch” in investor nationalities involve almost half of foreign affiliates in developed economies and more than a quarter in developing economies.

The report found that the top 100 multinational enterprises in the UNCTAD Transnationality Index have on average more than 500 affiliates each, across more than 50 countries, with multiple hierarchical levels across up to six borders. They have about 20 holding companies owning affiliates across multiple jurisdictions, and they have almost 70 entities in offshore investment hubs.

The implication for policymakers is that ownership-based investment policies will have to be rethought to safeguard the effectiveness of ownership rules, the report says.

On the one hand, policymakers should test the “fitness for purpose” of ownership rules compared to mechanisms in investment-related policy areas such as competition, tax and industrial development. On the other, policymakers can strengthen the assessment of ownership chains, and ultimate ownership, and improve disclosure requirements.

However, policymakers should be aware of the administrative burden this can impose on public institutions and on investors. Overall, it is important to find a balance between liberalization and regulation in pursuing the ultimate objective of promoting investment for sustainable development.

The report also notes that 80 per cent of countries restrict majority foreign ownership in at least one industry. The trend in ownership-related measures is towards liberalization, through the lifting of restrictions, increases in allowed foreign shareholdings or easing of approvals and admission procedures for foreign investors. However, many ownership restrictions remain in place in both developing and developed countries. The blurring of investor nationality has made the application of rules and regulations on foreign ownership more challenging.

According to the report, indirect ownership structures expand the reach of international investment agreements: about one third of investor-State dispute settlement claims are filed through intermediate entities. Since 2010, about one-third of claims for which relevant information is available were filed by claimant entities that are ultimately owned by a parent in a third country (i.e. not party to the treaty on which the claim is based) or in the respondent State. The share of intermediate entities acting as claimants increases to 75 per cent for cases based on treaties with countries that are major ownership hubs and offshore investment hubs.

Policymakers should be aware that up to 30 per cent of companies benefit from mega-regional agreements through “double passports”.  Up to a third of apparently intraregional foreign affiliates in major (prospective) mega-regional treaty areas, such as the Trans-Pacific Partnership or the Transatlantic Trade and Investment Partnership, are ultimately owned by parents outside the region, raising questions about the ultimate beneficiaries of these treaties and negotiations. Policymakers should aim to avoid uncertainty for both States and investors about the coverage of the international investment regime (figure 3). 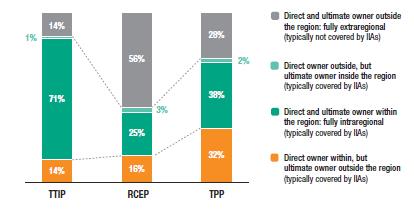