After a sharp fall in 2012, foreign direct investment (FDI) activity by the world’s 39 developed economies recovered in 2013, albeit marginally in the case of outflows, according to UNCTAD’s World Investment Report 20141. Inflows were $566 billion, rising 9 per cent over 2012. Outflows were $857 billion in 2013 – virtually unchanged from a year earlier. Both inflows and outflows remained at barely half the peak level seen in 2007.

Subtitled Investing in the SDGs: An Action Plan, the World Investment Report 2014 focuses on channeling investment to sustainable development targets such as poverty reduction, social inclusion and climate change.

Despite the overall increase in inflows, the recovery was concentrated in a smaller set of economies with 24 of 39 economies registering a fall in inflows. Overall outflows were weighed down by a contraction of outflows from North America, despite the continued expansion of investment from Japan and a recovery in Europe. In terms of global share, developed countries accounted for 39 per cent of total inflows and 61 per cent of total outflows – both at a historically low level.

One reason for the subdued level of FDI flows was that an anticipated upturn in M&A activity failed to materialize until the first quarter of 2014. A downturn in the mining industry also played a role. As in 2012, intra-company loans proved to be particularly volatile and their patterns varied across countries. The report also notes that, as the weight of developing economies in the global economy increases, transnational corporations (TNCs) are readjusting their focus to respond to the growing potential of emerging markets.

By region, inflows to Europe were $251 billion (up 3 per cent over 2012), of which the EU countries accounted for $246 billion. Among the major economies, inflows to Germany – which had recorded an exceptionally low volume in 2012 – rebounded sharply, but France and the United Kingdom saw a steep decline. In all cases, large swings in intra-company loans were a significant contributing factor. Inflows to Italy and Spain rebounded sharply with the latter becoming the largest European recipient country in 2013 (figure 1).

Outflows from Europe increased by 10 per cent to $328 billion, of which $250 billion were from the EU countries. The report shows that Switzerland became the Europe’s largest direct investor country (figure 2). However, set against the drastic decline in 2012, the recovery of European FDI was modest. Both inflows and outflows remained about half of the level in 2011 and about a quarter of the peak in 2007.

The United States was not the only recipient country that saw a large increase in Japanese FDI, which grew for the fourth successive year, rising to $136 billion. Market-seeking FDI in South-East Asia also helped Japan consolidate its position as the second largest direct investor country (figure 2). Inflows to Australia and New Zealand together declined by 12 per cent to $51 billion.

Although the share of transatlantic FDI flows has declined in recent years, the EU and the United States are important partners for each other in terms of FDI. As such, a successful conclusion to the Transatlantic Trade and Investment Partnership (TTIP) negotiations could have significant impacts on FDI flows.

Looking forward to 2014, positive economic news appears to be spreading to a growing number of developed countries, which should boost executives' confidence. Indeed, M&A activities picked up significantly in the first quarter of 2014. Furthermore, shareholder activism is likely to intensify in North America, adding extra impetus to the spending of accumulated earnings. 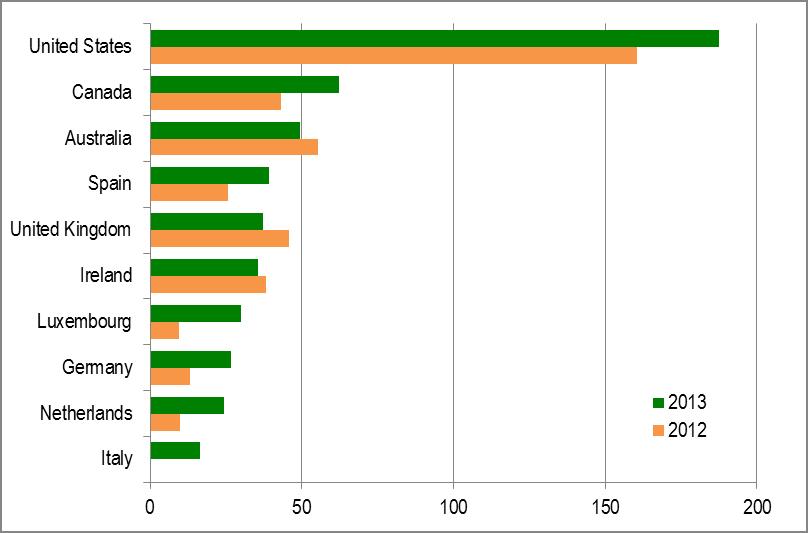 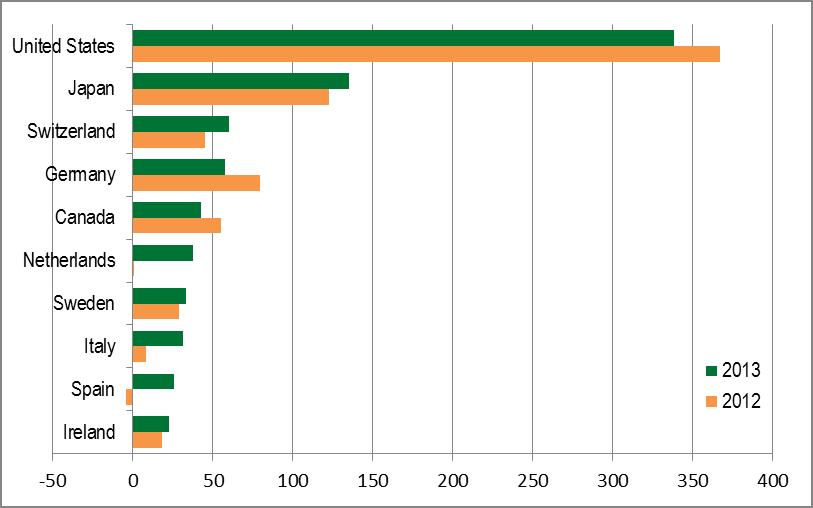