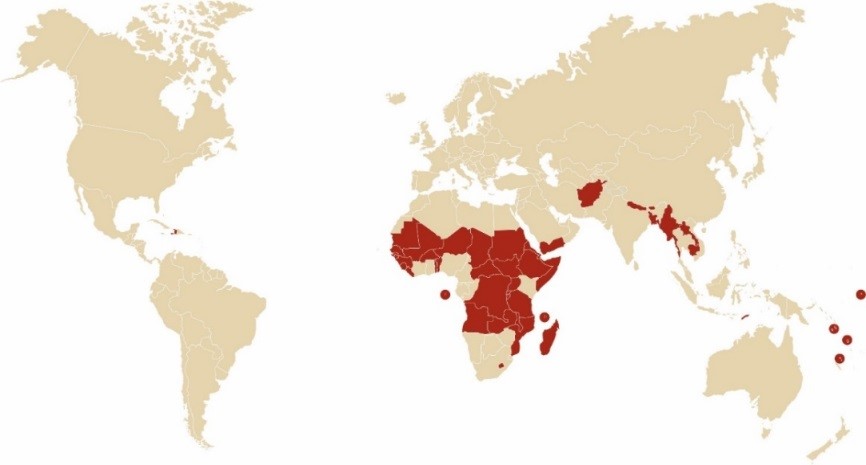 Note: The boundaries shown and the designations used on this map do not imply official endorsement or acceptance by the United Nations.

The list of the least developed countries is reviewed every three years by the Economic and Social Council of the United Nations, based on recommendations made by the Committee for Development Policy. Since the category was defined 45 years ago, five countries have graduated from least developed country status, as follows: Botswana, December 1994; Cabo Verde, December 2007; Maldives, January 2011; Samoa, January 2014; and Equatorial Guinea, June 2017.

In March 2012, the Committee for Development Policy recommended the graduation of Tuvalu. However, in the absence of consideration by the Economic and Social Council, this recommendation has not come into effect.

In March 2015, the Committee recommended the graduation of Angola by virtue of the income-only graduation rule (see below).

Vanuatu is scheduled to graduate in December 2020.

The following three criteria were considered by the Committee for Development Policy in the latest review of the list in March 2015:

(a) Income, based on a three-year average estimate of the gross national income per capita, with a threshold of $1,035 for inclusion on the list and a threshold of $1,242 for graduation
(b) Human assets, based on the composite Human Assets Index, composed of the following indicators: nutrition (percentage of the population that is undernourished); health (child mortality rate and maternal mortality ratio); school enrolment (gross secondary school enrolment ratio); and literacy (adult literacy rate)
(c) Economic vulnerability, based on the composite Economic Vulnerability Index, composed of the following indicators: natural shocks (instability of agricultural production and share of the population that have been victims of natural disasters); trade-related shocks (instability of exports of goods and services); physical exposure (share of the population in low elevation coastal areas); economic exposure (share of agriculture, hunting, forestry and fishing in gross domestic product, and merchandise export concentration); size (population); and location (remoteness)

A country normally qualifies for graduation from least developed country status if it has met the graduation thresholds under at least two of the three criteria during the period covered by at least two consecutive reviews of the list. However, if the per capita gross national income of a least developed country has risen to a level that is at least double that of the graduation threshold, the country is deemed eligible for graduation regardless of its performance under the other two criteria (the income-only graduation rule).